Thoughts on what I watched on TV last week (sorry for the delay; blame it on computer problems...).


The Venture Bros.: Everybody Comes to Hank's 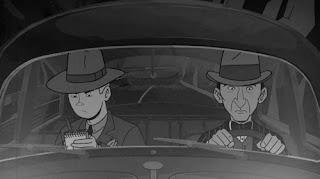 Being a sucker for film noir (my senior thesis in college was about how to read "Do Androids Dream of Electric Sheep?" as a detective novel), this episode was squarely in my wheelhouse, and I loved it, especially Hank's noir-speak and the fact that whenever he removed his hat color returned. I was also surprised at how much I enjoyed the Alchemist, a character that's never done much for me before. It's a testament to the strength and breadth of Venture Bros.' supporting cast that they can still come up with new and intriguing pairings of characters that bring different elements of those characters to light.

Also, Hank leaving himself an out from the memory wipe with the message to Future Hank, complete with Total Recall reference? Classic.

The Alchemist: All right, Hank, I'm in.  I'll be your partner until we solve the case or I get completely bored doing it!

Billy: It's on the up and up! But in my circle when you can't find something and you got a fist full of hot cabbage you dial Nikki Fictel. You get my mean?
The Alchemist: No. I can barely understand Hank and you do it with a speech impediment. 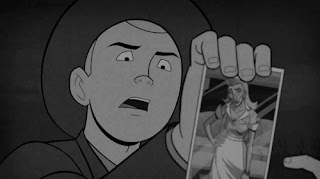 Hank: Sounds like you're trying to seduce me. And this old Shamus can smell it when a chippy's pulling a flim-flam. What are you hiding!?


How I Met Your Mother: Subway Wars
The end of this episode's story, in which Barney recognizes Robin needs a win and takes Ted and himself out of the running so she can get it was one of those rare but impactful moments of humanity the writers occasionally give Barney in order for the audience to laugh at his usual and otherwise-deplorable antics, and I greatly appreciate all of those moments.

Other highlights of the episode include Marshall's hilarious man against the machines folk song and Lily and Marshall's pre-parenthood bucket list (such as“really learn how to ski, not just go up and get faced in the lodge”).

Barney: Every time I take the bus, there is one crazy person no one wants to sit near. That’s why I’ve never taken the bus. 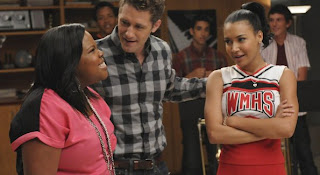 I'm glad they finally addressed the whole "Kurt comes on too strong to Finn/Finn throws insults at him/Kurt's dad gets mad at Finn" thing from last season. It was overdue, and I'm glad that Kurt's dad learned that Kurt wasn't 100% innocent in that exchange. As always, the scene between Kurt and his dad was awesome, especially their discussion of a situation with no easy answers. Seriously, who knew the guy from Yes, Dear was this good?

I love how Santana was rocking the stank face every time anyone else performed.

Kurt and Rachel are two characters who both possess a great capacity to piss me off, but I was pleased to see them put aside their differences and sing together at the end. Kurt's dislike of Rachel (while understandable) has always bugged me; I've always felt the original core of the club (Finn, Rachel, Artie, Tina, Mercedes and Kurt) should be closer by virtue of having been there first.

I was a bit surprised to see that the breadsticks at Breadsticks were the crunchy kind and not the soft, chewy kind, a la Olive Garden. Had they been the latter, I could have better understood everyone's obsession with going there, though I suppose the former is easier from a production perspective.

This is an interesting theory about the writing of the show, and one that definitely seems to fit (and explains some of its characteristic inconsistencies). I'm a bit appalled I never noticed it before.

Favorite Brittany Line: For a while I thought you were a robot.

Favorite Song: I really enjoyed Finn and Rachel's first duet, which featured the song I was most familiar with, and their second duet was downright hilarious ("I'm shocked!"), but overall, I appreciated the sentiment and skill on display in Rachel and Kurt's closing duet, "Happy Days Are Here Again/Get Happy". 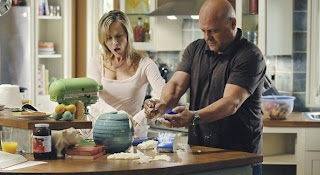 Man, some of the random characters on this show are jerks. Between JJ's math teacher, who is convinced he's cheating even though JJ mathematically bitch-slapped him in a way he couldn't have done if was cheating, the PTA mom who passive-aggressively needles Stephanie about being a working mom every chance she gets and every single random male character harassing Jim for being the dominant parent at home like no one's ever heard of the concept of a stay-at-home dad before, there's a part of me that hopes this show goes in a direction where the family uses their powers to forcefully rule the town of dickheads they in which they apparently live.

I hope Stephanie's desire to find a cure for their powers doesn't lead us down a "I have to get rid of my powers even though they make me super cool" road, because I got enough of that from Heroes already, thank you very much.

Also, I have yet to tire of seeing super powers depicted in live action. The scene with the guy Force choking the detective was pretty intense.


Modern Family: Earthquake
One of the interesting things about this episode was the way the earthquake triggered a lie in each of the three stories which, by episode's end, hadn't been refuted but still brought certain characters closer together. This inversion of the standard sitcom lessons about the importance of honesty is a great example of how this show manages to be both a typical and an atypical sitcom, often at the same time.

Also, of the three Dunphy children, Alex is very Lisa Simpsons-esque (with Luke and Haley splitting Bart's cheery dumbness and bratiness amongst themselves) and her desire in this episode to go to the Museum of Tolerance definitely seemed like the kind of place Lisa would manipulate her family into taking her.

Cam: You're no joke; you're Pepper Salzman.


Modern Family: Strangers on a Treadmill
There are two types of people in this world: those who find Phil's lame jokes ("I’m not saying J.J. is small, but in the real estate section he was described as ‘charming,’") funny, and those who don't. I am the former.
Newer Post Older Post Home
Posted by Austin Gorton at 8:00 AM