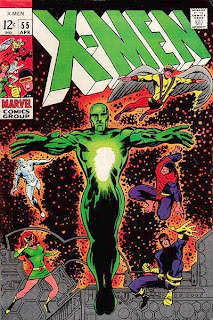 In a nutshell
The X-Men follow the Living Pharaoh to Egypt and Alex discovers he's a mutant.

Plot
In the tunnels beneath the Pharaoh's lair, Cyclops battles the villain while both the police and the X-Men search for him above ground. Telepathically sensing his thoughts, Marvel Girl and the X-Men close in on Cyclops but he's knocked out by the Pharaoh before they arrive and carried away, along with his brother Alex, by the Pharaoh's henchmen. The Pharaoh and his entourage board a chartered plane bound for Egypt. Cyclops awakens, his head covered in a hood to contain his power. With Cyclops conscious again, Marvel Girl telepathically senses him once more. The X-Men attack the Pharaoh's plane in midair, but are defeated.

Later, somewhere in Egypt, Cyclops and Alex are placed within a tomb which soon begins filling with water. The pair escape and attack the Pharaoh's followers. The X-Men arrive just as the Pharaoh is about to enter the fray. Afraid the fight is turning against him, the Pharaoh climbs atop a pyramid to get a clear shot at Cyclops and Alex, but Alex sees him and instinctively fires energy from his hands, blasting down the Pharaoh. The villain is captured while his followers flee, and Alex is stunned to learn he is a mutant.

2nd Story: "Where Angels Dare to Tread"
Warren has left school and struck out on his own as a superhero, the Avenging Angel, though he is chiefly concerned with making a name for himself. He draws the attention of Cyclops and Iceman, who theorize he may be a mutant, something confirmed by Professor X. After stopping a robbery at the Atomic Institute  Warren takes a vial of the gas the criminals he captured were after so he can return it the next day to proper acclaim. Returning to his apartment he finds Cyclops and Iceman waiting for him. They invite him to join the X-Men, but he refuses, insisting he works alone. 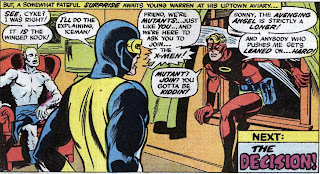 Firsts and Other Notables
Roy Thomas returns as writer, beginning his second, more highly regarded, run on the book, though before doing anything else, he has to wrap up the story started by Arnold Drake last issue. The main story flows easily enough from the last, but the backup shifts abruptly, leaving behind Angel's boarding school adventures to establish that Warren operated as a solo superhero (The Avenging Angel) before joining the X-Men.

Charitably, one could argue that after saving his fellow students from the fire last issue Warren was inspired to become a superhero, left school, and began superheroing, though the story itself gives no implication as such. Apparently Rascally Roy just wanted to do his own thing with the backup.

This is also the last issue featuring some combination of Don Heck and Werner Roth on art, a run stretching back to issue #33 (including some fill-ins), as Neal Adams comes aboard next issue.

A Work in Progress
Alex discovers he's a mutant when he discharges energy from his hands to defend the X-Men from the Pharaoh. Also, the Pharaoh grows weaker when Alex uses his power, something that will become important in the next issue. 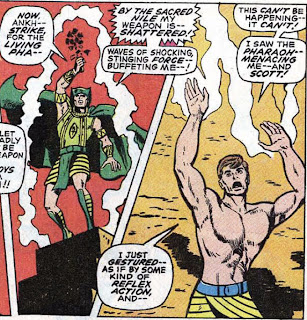 The X-Men are now using some kind of jet/rocket hybrid vehicle. 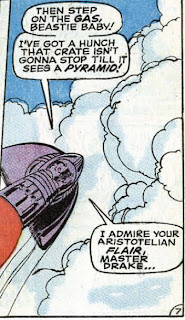 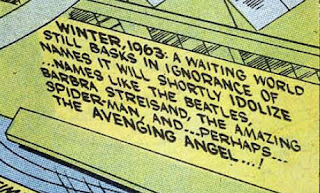 The Awesome and Terrible Power of Cyclops
The Pharaoh puts a captured Cyclops in a skintight hood which prevents him from using his powers (there's some business about it preventing his visor from opening) so Cyclops headbutts open the sarcophagus holding his brother. 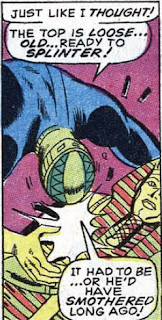 For Sale
What the hell kind of pants were kids wearing back then (click to embiggen)? 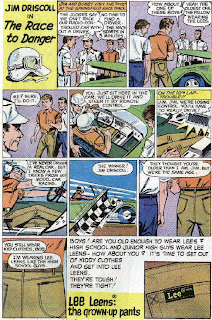 Roy Thomas on returning to X-Men
"Stan [Lee] asked me to come back. He just wasn't happy with the way X-Men had gone after I'd left it. The book wasn't selling as well as it had been when I was writing it. Not that it was selling wonderfully then, either..."

Teebore's Take
Roy Thomas returns to the book and kicks off his second stint as the writer of X-Men, an issue ahead of his famed collaborator on this run. Compared to his first go round as writer, this time Thomas will more fully explore the characters and themes inherent to the X-Men, as gone are the borrowed Fantastic Four and Iron Man villains and stories about Marvel's subterranean races, replaced by original riffs on the Lee/Kirby X-Men stories. The forthcoming Thomas/Adams material will feature stories that include such classic elements as the Sentinels, Magneto and the Savage Land while also making significant and lasting contributions to the X-Men mythos (as well as being a huge influence on the work of Chris Claremont, Dave Cockrum and John Byrne when the book is retooled in the 70s).

Whether this riffing on themes and characters specific to X-Men comes about because Roy has by now had a chance to fully explore the Marvel Universe (while writing these issues, he remains the writer of Avengers as well) or because he's rose through the ranks at Marvel to where he's now considered Stan Lee's heir apparent as Editor-in-Chief (so he's less concerned with staking a claim to the Marvel Universe outside of X-Men) or because he's feeding off Neal Adams enthusiasm for the characters and contributions to the plot is unknown. But the fact remains: the Thomas/Adams runs remains well regarded and hugely influential, and is, at this point in our examination, the most significant work on the title since the earliest Lee/Kirby issues (and, it could be argued, perhaps even more significant than their work).

This issue, lacking Adams' involvement and continuing Arnold Drake's story, is nothing special (and really, the Thomas/Adams run won't really take off until after the Living Pharaoh story is put to bed next issue). There's more Pharaoh vs. X-Men fighting and the not-so-shocking "cliffhanger" revelation that Alex, the brother of the mutant X-Men's mutant leader, is a mutant.

But it'll be the last "nothing special" issue for awhile.
Newer Post Older Post Home
Posted by Austin Gorton at 8:00 AM