Thoughts on what I watched last week. 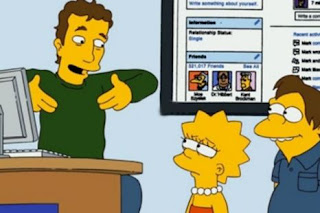 My favorite bits were the talking goat in the Microloan commercial ("I am just a goat, but even I know that a peasant in an emerging economy can't catch a break...and now, apparently, I am a girl!") and Skinner and Chalmers excitement over Nelson paying $11 an hour, but I also enjoyed Mark Zuckerberg's Facebook updates ("Mark Zuckerberg is happy to meet new friends") and this exchange:


The Simpsons: MoneyBART
Maybe it's just because I'm a sucker for baseball, but this episode was very good (even in spite of the fact that at the moment, the last thing I want to think about is baseball since the Twins spent the postseason wetting their pants instead of actually playing baseball against the Yankees...). Granted, an episode skewering Moneyball is at least five years late, but the episode was really poking fun at baseball statisticians in general, something that remains relevant. It was also an episode filled with some great lines.

Mike Scioscia's appearance was a bit random (I wonder if someone on the production team was betting/hoping the Angels would be in the postseason this year, to further buildup his appearance) but I loved the callback to season three's "Homer at the Bat" ("Didn't you get radiation poisoning working at the Springfield Nuclear power plant?" "I sure did, and it gave me super managing powers. I also demagnetize credit cards"). Also, Lisa's list of "female" managers (Connie Mack, Terry Francona, etc.) was great.

Moe: The only thing I know about strategy is that whatever the manager does is wrong. Unless it works, in which case, he's a button pusher.

Lisa: I'm surprised you guys know so much about a sport.
Prof. Frink: Lisa, baseball is a game played by the dexterous, but only understood by the poindexterous.

Bill James: I made baseball as much fun as doing your taxes!


Family Guy: Excellence in Broadcasting
As was established in the comments of my last post, I'm a sucker for moments when Brian acts like a dog. This episode had another great one:  “First I'm gonna stare at this brown paper bag that I'm pretty sure has food in it.”

The tone of this episode was oddly muted, as the back-and-forth battle between liberalism and conservatism seemed, at times, more respectful and thoughtful than one would expect with Family Guy (likely due, in some part, to Limbaugh's contributions). I did like that the ultimate proof that Brian was a liberal at heart was that he cared enough to not want four-year-old kids sentenced to execution. 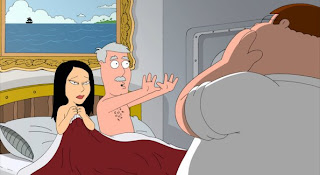 Highlights of this episode included Carter going off to fight in the Great War with Alaska (against Walrus troops) and Peter's list of catchphrases ("Why don't you tell it to my butt, someone who actually gives a crap!”) 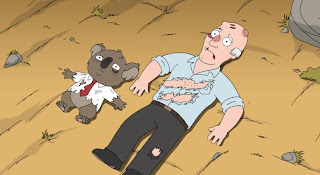 Most of my friends are sick of hearing me say that on any given week, chances are I'll laugh more at American Dad than Family Guy, and this week was no exception. Though the "death count" gimmick was odd and random, I thoroughly enjoyed the battle royale between Patrick Stewart and Reggie the Koala and another installment of "Legman and Wheels" (highlighted by Steve, in character, convincing Roger he was possessed).


The Venture Bros.: Any Which Way but Zeus 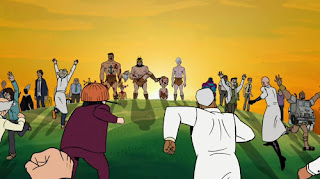 Like a lot of Venture episodes, I found myself unclear as to what exactly was going on until near the end, and as a result, I'll probably get more out of it after watching it again. Which is not to say I didn't enjoy it. Venture Bros. is a show with a lot of respect for its viewers, and isn't afraid to drop us into the middle of a story with little fanfare or to expect us to be paying attention, which is why repeat viewings are so rewarding, something that I definitely appreciate. At the same time, there's plenty of great material that even if it takes awhile (or a second viewing) to fully get what's going on, the episode is still enjoyable.

Highlights of this episode: Hunter and Brock's long discussion of a particular stripper's sad breasts ("Those things are like a little kid with progeria cracking all his ribs trying to catch a Nerf ball. Just sad. Damnit she has gloomy tits!"), the code names at the summit (especially Keenan & Kel and Topanga Lawrence) and the surprisingly sweet revelation that Doc sees a lot of himself in Hank, rather than Dean. 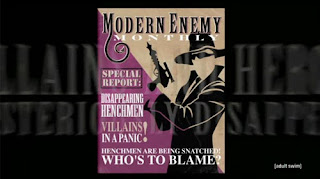 How I Met Your Mother: Unfinished
A Kevin Smith-ian Star Wars exchange:

Marshall: The Death Star’s gonna get built either way, and don’t you think the architect is pretty psyched to have that on his space resume?  Yes, his design was flawed, in the sense that a single bullet fired into a particular vent would explode the whole thing ...”
Ted: For all we know, that was the contractor’s fault.

Marshall: ...with clearly marked emergency stops for every trash compactor on the detention level. 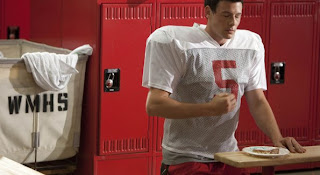 2. This was an episode that very, very easily could have been a horrific train wreck of an episode, but it worked. It struck the right balance between flippancy and heavy-handedness and did it's best to not give the edge to any one particular spiritual worldview.

3. It's not like I wanted Kurt's dad to die or anything, but I could have done without the whole "coming awake moments after a heartfelt confession" routine. There just had to have been a way to bring him back in a way just a bit less cliche (and yes, I realize I'm complaining about cliches on Glee).

4. Kurt is a character who is often far too bitchy for me (he can be as annoying as Rachel, in his own way, at times) and this was never more true than when he waggled his finger at Finn after Finn tried to give him a sympathetic pat on the back. I know he was grieving and all that, but I still wanted to smack him.

5. Emma, a character who often doesn't get a lot to do (and what she gets isn't always that great) got some great stuff in this one. I really liked her conversation with Finn.

6. Of all the emotional moments in this episode, none got to me more than Sue's surprisingly human discussion of faith with her sister.

Favorite Song: The closing number was chill inducing, but too short. I'm a sucker for covers of Beatles songs that strike a tone in direct opposition to the original, so Kurt's mournful rendition of "I Wanna Hold Your Hand" was my favorite.

Favorite Brittany Line: I did a book report on heart attacks if you want to give it to the doctor. It got knocked down a whole letter grade because it was written in crayon.

Favorite Sue Line: I'm sorry for what you're going through. I wouldn't wish it on my worst enemy. I guess I don't have to. I think Mary Lou Retton's an orphan or something.

Running Wilde: Into the Wilde
It has it's moments, but it's not really getting better... 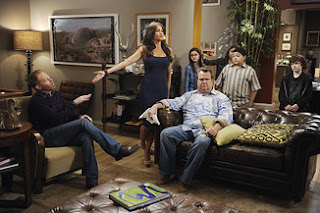 One of the recurring criticisms of the otherwise seemingly criticism-proof first season of Modern Family was the lack of physical affection shown between Mitch and Cam. The producers addressed the issue in the second episode of this season, and smartly tied what was, perhaps, a network-mandated limitation (or gunshy-ness on their part) into the characters' story by establishing that Mitch is far more uncomfortable with public affection than Cam. The whole episode was, beneath the wacky hi-jinks, really about physical demonstrations of affection, which enabled the producers to set the blink-and-you'll-miss-it first onscreen kiss between Mitch and Cam in the background of a scene instead of making an "event" out of it. As a result, the issue was addressed without making a big deal out of it, which was the best possible way to handle it.


The Big Bang Theory: The Cruciferious Vegetable Amplification
Big Bang Theory is a show I enjoy despite a number of persistent problems (the underexposure of Leonard, the overexposure of Sheldon, the lack of an explanation for why any of them are friends with Sheldon, Wolowitz). One of the more irritating of those problems was on display in this episode, as once again the writers didn't know how to end the episode, and it just sort of...stopped. No conclusion to the story was given and, more than likely, by the next episode it will be like this whole "Sheldonbot" thing never happened.

Otherwise, like many other Big Bang episodes, it was quite funny (the whole "Raj can't talk in front of women thing is another of the show's recurring issues, but the idea of Howard making up what he's saying was inspired, and the whole sequence with Leonard and the SheldonBot in the car was comedy gold), before ultimately falling victim to a familiar trap.

Penny (on jogging): I just run till I'm hungry, and then I stop for a bear claw.


The Big Bang Theory: The Zazzy Substitution
This episode, on the other hand, did a much better job of coming to an actual conclusion instead of just ending. Plus, it's always nice to see Laurie Metcalf again. Maybe it's just cuz of the cats, but I thoroughly enjoyed this one (though Raj was written wildly out-of-character throughout). 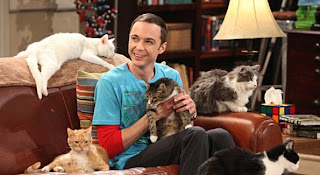