The Venture Bros.:  Pomp and Circuitry
Hank is probably my favorite character (at least amongst the main cast) so I thoroughly enjoyed what was essentially a Hank-centric episode, although the secondary plot featuring Phantom Limb escaping Guild captivity and teaming up with Professor Impossible, while funny (I always appreciate a Professor Impossible appearance, mainly because Reed Richards is such fertile ground for comedy), felt more disconnected from the main plot than with most Venture outings. Amongst the highlights were Hank and Dean's list of career choices, Brock's fight with the Vatican's karate gorilla Swiss Guards, the Venture Bros. take on the slow clap, and Doc Venture's take on college admissions ("he's a legacy").

Hank's Career List:
1. Drifer (like the Red Shoes diary guy (who couldn't have been a drifter since he got regular mail) or David "The Hulk" Banner)
2. Owner and operator of a chimp Eden
3. Golden Age Batman
4. Post-Crisis Batman
5. Secutor-class gladiator

Hank: I dare you to find someone more qualified than me! I've been training under Brock my entire life! I've traveled to every continent on the globe, including Atlantis and outer space and Brigadoon! I've been shot at, poisoned, stabbed, cudgeled, crocodiled, king cobraed, red anted, you name it, and I'm still standing! Now if that's not the resume of a top-notch superkiller secret agent, then I don't know what is.

The Event: Pilot (series premiere)
After hearing SO MUCH bad stuff about this pilot, I was expecting it to be terrible, but maybe because my expectations were set so low, it turned out not half bad. Not great, mind you, but watchable, intriguing in places, and worth sticking it out for a few more episodes.

Granted, I'm a sucker for these kinds of shows which feature big conspiracies, temporally-jumbled narratives and meetings where the army and the CIA try to convince the president of something. Basically, if you have files folders and someone saying "that's on a need-to-know basis", I'll at least give it a look. Besides, TV has GOT to get one of these plot-focused mystery shows right eventually, even if by accident (Lost has probably come the closest, though it still missed the mark), and there's usually enough fun plot stuff going on to make them entertaining to watch even if they are failing.

As for the first episode of The Event, it definitely felt like the first part of a two part pilot (I wonder why NBC didn't premiere it a week earlier as a two part event for The Event). The audience is clearly supposed to like Jason Ritter's character and I do, largely because the freaky scenario of finding his girlfriend missing and all record of his existence on a cruise ship wiped out is so freaky it's easy to empathize with him, and the ominous-from-the-get-go hipster couple that befriended him added to the freakiness. Some of the temporal jumping around was unintentionally comical (I especially laughed after they gave us the "Thirteen Months Later" timestamp, which ended with the president saying he wanted to go to the prison and cut to the plane landing; I wondered where the "Twelve Months, 3 weeks ago" stamp was) but it was easy enough to follow.

Much has been made in the pre-premiere reviews of how weak the character work in this pilot is. The argument is that character has to come first in order for the audience to then care about the plot*. While I certainly wouldn't argue that the character work in this first episode is pretty thin on the ground, I would argue that it's okay. There IS a contingent of the audience (myself included) for whom the plot of a show like this is the appeal, for which the characters involved come second. I LIKE vague conspiracies and dense mysteries, answers that lead to more questions (as long as the answers make sense and the questions serve a purpose other than artificially prolonging the narrative) and I'm okay giving the characters some time to grow on me while I enjoy the plot elements.

*The most oft-cited example is, of course, Lost, a show which put its characters first, especially in the first season (when the mysteries were limited to a polar bear, weird monster noises, a hatch in the ground, and a couple island inhabitants) and the last season (when the producers desperately backpedaled in order to cover for their incomplete narrative), but I would argue that while Lost was a great show, it's "character first" approach wasn't 100% universally appreciated (or right), as I always remained as invested (if not more invested) in the plot as I was in the characters, an investment which led to great frustration when it became clear I cared more about the plot than the writers.

At the moment, I'm most intrigued by the detainees in the Alaska camp: are they super humans? Aliens? Time travelers? Something else? I want to know. The speed with which we find out, as well as what, exactly, they're ultimately revealed to be, will largely determine whether or not I keep watching. One of the admitted problems with a plot-first show is that without strong characters, it lives or dies by its plot, and in this case, if the detainees are revealed to be something cool (ie science fiction-y) but then the show is too afraid to fully embrace and explore such a concept, I'm outta there.

Castle: A Deadly Affair (season premiere)
Castle isn't a show I'm likely going to write about very often. It's fun and enjoyable (largely on the strength of Nathan Fillion) but it's very much a case-of-the-week procedural. I'm not a huge fan of those, though I do watch a few (this, The Closer). They're entertaining, but without much substance. Which is fine, but makes writing about them hard.

I will say, the least engaging element of Castle is the damned will they/won't they relationship which every show with an otherwise-platonic male and female lead feels compelled to do.

For the most part, Castle does a good job of keeping that stuff in the background, but with the show obligated to address Castle's in-show absence over the summer (which was brought about in the previous finale by one of those oh so "classic" mistimed moments will they/won't they stories thrive on...) it took center stage in the premiere. I found myself mainly impatient to see the regular status quo restored, and largely indifferent towards the means by which that came about. Now that things are back to normal, I hope the show lets the Beckett/Castle "romance" lie for a bit. 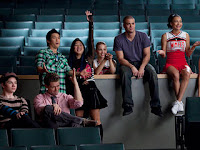 1. The cold open, in which Jacob catches the audience up with what happened over the summer, was clearly a fourth wall breaking wink at the audience, incorporating many of the things fans and nonfans said about the show over the summer. My favorite was the assertion that Will never rap again (something I heard A LOT online over the summer).

2. I like the introduction of Coach Beiste as an adversary who can play different notes than Sue, but I'm not gonna lie, when I first saw her sitting in Figgins' office, I wondered if they were doing a "Coach Tanaka had a sex change operation" storyline.

3. Santana's boob job plot seemed very...random, even for a show that throws LOTS of stuff into any given episode, but I loved Sue's reaction to it ("Oh and Boobs McGee: You’re demoted to the bottom of the pyramid so when it collapses, your exploding sandbags will protect the squad from injury") as well as Brittany's quiet and serious "stop the violence" when Santana and Quinn threw down.

4. Finn looks like he lost some weight over the summer.

5. I wish Sue and Will had stayed frenemies longer. It's an interesting and different dynamic for them (I especially liked their discussion of how no one wants to join something that everyone can join; she was still being Sue, but she had a point), and I'm bummed that we're going back to more of the same "Sue hates Will and wants to destroy him" stuff instead of "Sue hates Will but has grudging respect for him".

6. Favorite musical number: Probably "Empire State of Mind", though Charice (who is apparently somebody I should know, but don't, because my contemporary, non film-score music fu is very weak) sang the hell out of her audition song as new girl Sunshine Corazon.

7. Favorite Sue line: "The two of you are making a very serious mistake today, the likes of which have not been seen since the Mexican Indians sold Manhattan to George Washington for an up-skirt photo of Betsy Ross."

Running Wilde: Pilot (series premiere)
It has potential, but it's also more likely to really, really suck. I'm an easy mark and even I barely laughed at much of this. Gob Steven, as the main character, is just too unlikeable to carry the show, and the supporting cast around him is just too weak to make up for it. The Arrested Development alums involved means I'll give this a couple more episodes to see if it improves, but even if it doesn't get canceled sooner rather than later, I doubt I'll stick around.

Top Chef: Reunion
Andy Cohen is still a douche. That is all.

Community: Anthropology 101 (season premiere)
Being that Community is one of my favorite shows on TV right now (if not my absolute favorite), I wish I could write more intelligently about why I like it so much and what it does well from episode to episode. As it stands, I just end up laughing my ass off through each episode, eager for more.

The second season premiere was no exception. I appreciated that Betty White was given an actual character to play, and didn't just repeat the "old lady says something crass" schtick which, while funny, has gotten a bit played out recently. Her reveal of the correct answer to the anthropology assignment was one of the highlights of the episode.

The Big Bang Theory: The Robotic Manipulation (season premiere)
The A-story, of Penny accompanying Sheldon on a date with Amy, gets an A. The B-story, in which Wolowitz gets his penis stuck in a robot hand, gets decidedly lower than that for being fairly obvious and one note.

Also, this premiere continued my growing sorrow for Leonard who, after being essentially the protagonist early in the show's run, has, with the rise of Sheldon, the ending of his relationship with Penny and, especially, the sublime Sheldon/Penny friendship, become probably the fifth most interesting character on the show, and seems to get less to do in a given episode more and more often. Every show needs a straight man, and it's not easy being one, but it's still kinda sad to Leonard fading more and more into the backgroun

Favorite Lines
Sheldon: You have broad hips and a certain corn-fed vigor. Is your womb available for rental?

*Look, just because the penis subplot was obvious and one-note doesn't mean I'm not going to laugh at penis jokes.

Liz: You sound weird. Did you grow a beard?
Jack (on getting domesticated): Before I know it she’ll have me wearing jeans and reading fiction.
Pete (worried about losing his job): I have five kids! That I don’t want to be at home with.
Newer Post Older Post Home
Posted by Austin Gorton at 8:00 AM