Boots' Best - Michael Jackson's This Is It 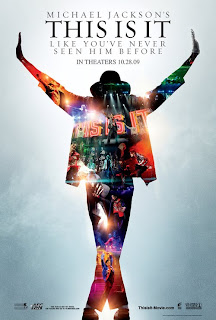 It's difficult to separate the art from the artist, truth from gossip, and public perception from personal lives.

Michael Jackson had a rough life. I know you're thinking that's not true. How could it be when the man was the KING OF POP, a millionaire who could have anything he wanted and, in some people's beliefs, did, even if those things weren't morally right.

I've recognized there's usually a reason for people to act the way they do. Michael's father constantly belittled him for his nose and his dark skin when he was younger. He was in the spotlight for practically his entire existence especially during the accusations of molestation and public trial. Put yourself in his shoes. How would you handle the pressure?

Despite the public perception of the man, I've always thought he was an incredible performer and true artist. In MICHAEL JACKSON'S THIS IS IT we are given a behind the scenes look at the King of Pop as he rehearses for his series of London Shows scheduled to begin in the summer of 2009 until his death.

I was mesmerized as he was green screened into an old Humphrey Bogart movie for Smooth Criminal, Thriller was re-imagined, and as he sang The Way You Make Me Feel to a beautiful dancer.

When the film finished with MAN IN THE MIRROR the tears came trickling down my cheeks.

The man's music has touched all of our lives. His dancing became a historic treasure. His legacy will be felt forever.

I'm never ashamed to admit that I am a Michael Jackson fan. I made the comment on facebook once that he was proven innocent of the charges flung against him. One of my facebook friends quickly pointed out that no one in the history of the United States has ever been "proven innocent" only ruled "NOT GUILTY". I'm no lawyer, but I still maintain he was innocent of the charges against him. He may have done some inappropriate things from the mindset of "modern society" however I truly believe the man wanted to share a non-sexual love with everyone he came in contact.

I'd highly recommend watching this film to get a glimpse at what could have been one of the most spectacular shows ever devised and to spread the LOVE.
Newer Post Older Post Home
Posted by boots~ at 10:49 AM

Email ThisBlogThis!Share to TwitterShare to FacebookShare to Pinterest
Labels: boots, michael jackson, michael Jackson's this is it, Movie Reviews