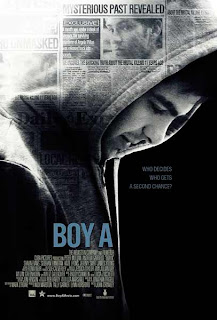 Andrew Garfield is 2 for two in my mind.

After his brilliant performance in one of my top ten movies of last year, The Imaginarium of Doctor Parnassus, I checked Netflix to see what else he has been in. I just finished watching Boy A.

This is a tougher one. You wont get too many answers. In short summary, Andrew Garfield plays a guy who's released from prison after being sentenced as a juvenile for a crime.

This film is LIFE. The characters are real and round, in the literary sense. The story is captivating. The journey of Boy A has its highs and lows and chill inducing coincidences.

Needless to say, the highlight for me was Andrew Garfield's performance. He takes a complicated role and completely owns it. Had the movie been American and a bigger "named"star had the role, he surely would have been nominated for an Oscar.

I'll be paying close attention to Mr. Garfield's career and you should too.
Newer Post Older Post Home
Posted by boots~ at 3:52 PM