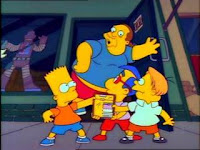 Or the One Where: Bart, Milhouse and Martin buy Radioactive Man #1

The Setup: After Comic Book Guy agrees to sell the comic for $100, the three boys pool their money to acquire it.

A Work in Progress: Comic Book Guy, who has become one of the show's most popular and most referenced characters, appears for the first time, as do crotchety neighbor Mrs. Glick (voiced by Cloris Leachman) and Bart's Batman-esque alter ego, Bartman.

Radioactive Man and Fallout Boy, Bart's favorite comic book heroes, are mentioned for the first time. Bart, Milhouse and Martin read Radioactive Man #1 and learn his secret origin (he's caught in the blast of an atomic bomb and, in true comic book fashion, receives super powers instead of debilitating illness). 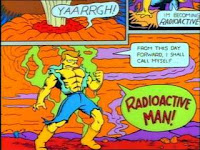 Lisa: If we don't get to the convention soon, all the good comics will be gone!
Bart: Ah, what do you care about good comics? All you every buy is Casper the Wimpy Ghost.
Lisa: I think it's sad that you equate friendliness with wimpiness, and I hope it'll keep you from ever achieving true popularity.
Bart: Well, you know what I think? I think Casper is the ghost of Richie Rich.
Lisa: Hey, they do look alike!
Bart: Wonder how Richie died.
Lisa: Perhaps he realized how hollow the pursuit of money really is and took his own life.
Marge: Kids, could you lighten up a little?

Marge: Maybe a part-time job is the answer.
Bart: Oh, Mom, I couldn't ask you to do that. You're already taking care of Maggie and Lisa is such a handful.
Lisa: She means you should get a job, stupid!

Homer: Hey, when I was your age, fifty cents was a lot of money.
Bart: Really?
Homer: Naah.
Bart: I am through with working. Working is for chumps.
Homer: Son, I'm proud of you. I was twice your age before I figured that out. 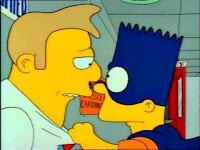 Teebore's Take: This is an episode I really should like more than I do. It was written for people like me, people that know firsthand the traits of comic book fans the show is lampooning in the first act. I love all the stuff at the comic book convention, the screening of the Radioactive Man TV show and the allusions to TV Superman George Reeves' mysterious death. The second act is great too, as Bart struggles to raise enough money for the comic book and realizes working is for chumps. It even has a "Wonder Years" gag, featuring that show's narrator.

But I just can't fully enjoy the episode because of the ending, in which Bart, Milhouse and Martin's squabbling and distrust of one another costs them their comic book. It's one of those endings that hangs over the episode every time I watch it because I know what's coming yet I somehow hope it will change. I want to scream at the kids, "don't fight over who gets to keep it on the weekends! Just get out of there before it gets destroyed! No, don't tie up Martin, you'll need him to save the comic!" It's an ending that could so easily be avoided. Bart's musings that close the episode say it well:

Bart: We worked so hard, and now it's all gone. We ended up with nothing because the three of us can't share.
Milhouse: What's your point?
Bart: Nothing. Just kind of ticks me off.

Okay, so maybe the ending isn't all that bad. Still, I can feel Bart's pain at the destruction of such a priceless comic, and it hurts.

One of the better Bart episodes of the season, plus it features "The Simpsons" first take on a comic book convention and introduces Comic Book Guy and Radioactive Man. 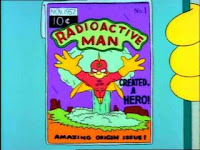