It's Not Just Spiced Ham!

A couple of quick housekeeping items.

First of all, fellow blogger, frequent GoL reader/commenter and all around good egg Falen recently hosted a writing contest in which entrants were tasked with crafting a 750 word fiction piece using one of six prompts she provided. And, if I may toot my own horn, yours truly placed second, and now a gaggle of writerly goodies is winging its way to my house! Check out my piece here, and read the other winning pieces on her blog.

Secondly, I'm turning on the spam filter for comments, meaning that when commenting, you'll now have to enter a "word verification" word (like most other blogs and websites). I hate doing it (mainly because I like commenting without entering the word) but I hate going to two or three posts every morning and deleting spam out of the comments more (because I don't want to keep the spam comments; that makes it seem like they've won). 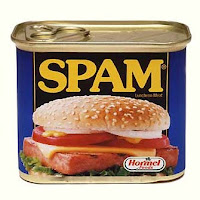 And, if anyone is curious, here is my Totally Scientific* list of The Five Most-Spammed Gentlemen of Leisure Posts For Some Reason: