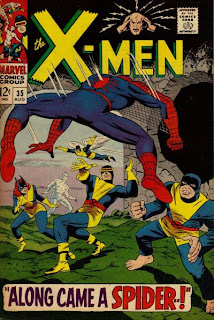 In a nutshell:  The X-Men fight Spider-Man

Plot: Banshee is in Europe, trying to locate Factor Three's hidden base. He discovers a hollow mountain that most likely serves as their headquarters, but is attacked by one of Factor Three's robotic spiders before he can relay the information to the X-Men. He does manage to send them a warning before passing out: beware the spider. Factor Three's goons retrieve Banshee, and Changeling sends a reconnaissance spider robot to the X-Mansion.

Meanwhile, Spider-Man is traveling through Westchester County when the spider robot lands. The two battle and Spider-Man ultimately destroys the robot, after which it disintegrates. At the nearby X-Mansion, the X-Men are desperately trying to locate Professor X when the arrival of the spider robot triggers an alarm from Cerebro. Leaving Marvel Girl behind to monitor Cerebro, the other X-Men race to the sight of Spider-Man's battle with the robot. Seeing Spider-Man, the X-Men remember Banshee's warning and attack him. Back at the school, Marvel Girl discovers Professor X gave Banshee a headband with a communication crystal in it, and she's able to locate him. At the same time, she realizes Cerebro is no longer alarming and thus, Spider-Man isn't the menace it was detecting. She alerts the other X-Men, who apologize to Spider-Man and return to the mansion. Once there, they make plans to travel to Europe and rescue Professor X.

Firsts and Other Notables
Factor Three member Changeling appears for the first time, though he won't be named until next issue. Thanks to a retcon much later in the Silver Age run, Changeling will eventually (behind the scenes) become the second person to join the X-Men. This iteration of the character is fairly unremarkable, but he does serve as the inspiration for the 90s cartoon's Morph, as well as fan favorite Morph from the "Age of Apocalypse" storyline, who, like an alternate Mimic, is featured prominently in the reality-hopping series "Exiles" in the 00s. 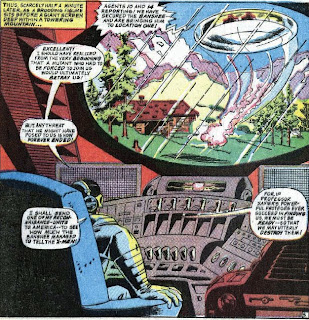 This is Werner Roth's final issue as the regular penciller.

Spider-Man's appearance in this issue marks the first time the character was written by someone other than Stan Lee. You'll be happy to know, no matter who is writing him, Peter Parker is still a colossal nerd. 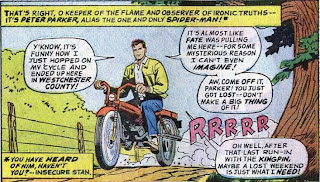 A Work in Progress
The X-Men now know where Factor Three's base is: a mountain range in Central Europe.

It's revealed that Banshee has been working for Professor X, attempting to locate Factor Three, and has been given special equipment, including the headband with the communication crystal in it, to that end.

Iceman's dialogue is a lot more fun if you read it in the voice of Dean Venture. 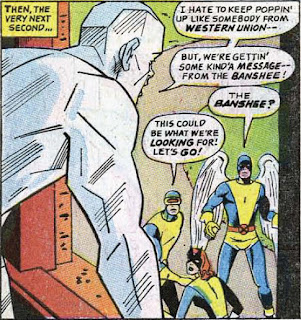 Ah, the Silver Age
The X-Men are processing data as part of their search for Professor X. Processing data was quite different back then.

Banshee's method of locating Factor Three's base is apparently to soar over Central Europe until something catches his eye. Also, his warning to the X-Men is awfully specific and less than helpful (after all, he had no idea Factor Three was going to send a robot spider after them, and the X-Men have no idea where the base is). 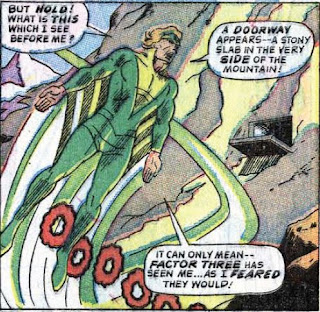 Changeling says of Banshee, "I should have realized...that a mutant who had to be forced to join us would ultimately betray us!" Ya think?

After locating Banshee, Marvel Girl looks up the location of Factor Three's base in a good old fashioned atlas. 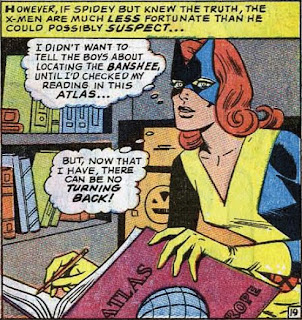 Young LoveWe almost made it through the entire issue, but then the second-to-last panel has Jean gushing over Scott. 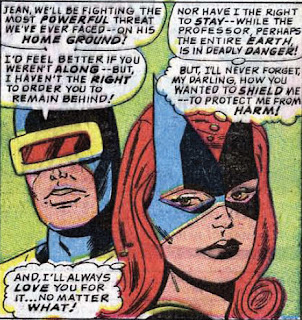 Human/Mutant Relations
Angel comments that the only thing mutants haven't been blamed for yet is flying saucers. 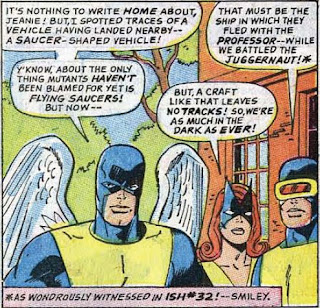 For Sale
Ah, X-Ray specs, the gold standard of the comic book mail away offers. Either they won't work or you'll die of horrid radiation poisoning. 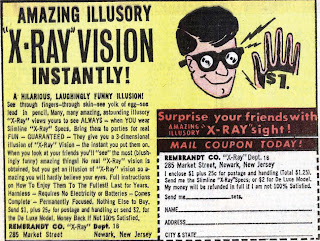 Teebore's Take: While it may seem like this is another case of Thomas forgetting he's writing the X-Men and not a different Marvel book, Spider-Man's appearance in this issue isn't as egregious as some past instances of such. For one, he's more the story's antagonist than a guest star in his own right (though it is telling that the X-Men, who are supposed to be stars of the book, comes across as bullies who attack Spider-Man with little warning or explanation while Spider-Man comes across as the aggrieved party). For another, Thomas manages to work in the Spider-Man appearance without completely derailing the Factor Three story or trying to change the story to match the guest star. Finally, it's generally considered that at this point, the sales of the book were low enough that it's likely Editor Stan Lee mandated an appearance by Marvel's sales-boosting star to help shore up the numbers of "X-Men".
Newer Post Older Post Home
Posted by Austin Gorton at 12:00 PM