Last week's "Dr. Linus" was a tough act to follow and, unfortunately, "Recon" seems to come up a bit short, more akin to the weaker "What Kate Does" than the finer episodes of the season. For perhaps the first time this season, the events of the flash sideways were more compelling than the story on the island. As with last season, when he was Dharma's sheriff, it's fun to see Sawyer use his prodigious talent for lies and deceptions for good. He and Miles, Lost's two greatest snarks, have always made a good team and it was enjoyable to see them as partners back in LA. The appearance by Charlotte was fun, albeit perfunctory, and she's never looked better.

If the flash sideways are the epilogue to the island events, as a popular theory suggest, then Sawyer's story in this episode neither strengthens nor weakens that theory. On the one hand, his life seems better in the sideways reality: he's a cop, not a criminal, and by episode's end, he's made the kind of character-changing decision (that he doesn't want to end up alone) that always seems to elude the characters on the island, a good sign that the flash sideways might be a "reward" for Sawyer (and, for all you Skaters out there, it's worth mentioning that after deciding he doesn't want to be alone and getting spurned by Sideways Charlotte, who does Sawyer run into but a certain freckled fugitive?). But on the other hand, Sawyer is still possessed with rage and a desire for vengeance over what Anthony Cooper did to his parents. From a season one perspective, this was the driving force in Sawyer's life, and his inability to get past it the flash sideways may suggest that Sawyer will continue down the wrong path on the island and be punished in his sideways life. So in the end, much like Island Sawyer went back and forth between working with FLocke and working against him, the Sideways portion of this episode does little to clarify that reality's overall purpose in the grand scheme of things.

On the island, the two major happenings involved the return of Charles Widmore, teased at the end of last episode, and the hint of a backstory for Smokey. FLocke's conversation with Kate about crazy mothers seemed to imply that Smokey was recalling his own memories and not just Locke's (though, of course, Locke had a crazy mother too). Sawyer's recon of Hydra Island established that Widmore has setup (a heavily armed) camp, seemingly in opposition to FLocke. Widmore's true motives have become as murky as Smokey: Ben has always painted him as the villain of the piece, yet here he is, opposing the creature currently serving as that villain. Is Widmore really, like Ben, part of team Jacob? Or is this a case of "the enemy of my enemy is my friend?" Or is Widmore a true third faction, a wild card siding with neither Jacob nor Smokey, pursuing his own agenda towards island dominance?

Stuff Worth Mentioning
The "con" that Sideways Sawyer was pulling at the beginning was the same one we saw him pull legitimately (and successfully) in his first flashback. 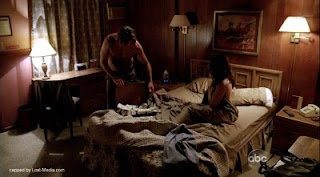 I liked that Cop Sawyer's code word was LaFleur.

Sideways Miles' dad (Dr. Chang, presumably) worked with Charlotte. Despite the presence of his dad in his life in this reality, Sideways Miles' last name is still Straume.

While FLocke seemed surprisingly direct with Kate and Sawyer at times, he remained less than truthful when talking to his, um, flock, failing to mention that while the black smoke killed everyone at the temple, he's also that black smoke. 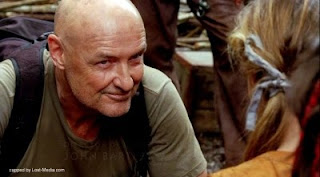 I do have to say, though, that I quite like how FLocke is polite and (seemingly) forthcoming, all the while being, you know, a mass-murdering monster. He kinda reminds me of the Mayor from Buffy in that regard.

The books on Sawyer's dresser included  Watership Down, which he was seen reading in the first season. 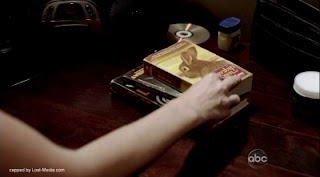 That was Liam, Charlie's brother, at the police station, looking for him. 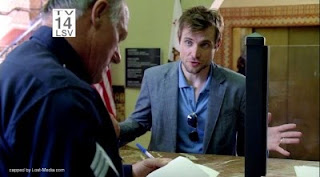 I liked the little stubby sonic towers. Also, the rifles Widmore's people were carrying were more or less the same style as the ones Ilana and the Shadow Seekers carried. Probably just a case of the show using the same props; for all of Widmore's vague allegiances, it seems unlikely he's secretly in cahoots with the Shadow Seekers, considering they tried to actively recruit Miles away from Widmore.

I really hope they're not pulling a "Widmore's been the good guy along!" switcheroo on us. Basically, his hiring of Keamy (who we've seen to be an ass no matter what reality he's in) is a means that no end can justify in my mind, even if Widmore tries to argue that the point of the freighter mission was to get Ben off the island so that Smokey couldn't use him to kill Jacob. Bottom line: good guys don't employ child-killing mercenaries.

Sideways Sawyer was watching Little House on the Prairie, obviously. At one point (season two-ish, I think) he told Kate about how when he was a kid he was stuck at home with mono and all that was on TV was Little House. 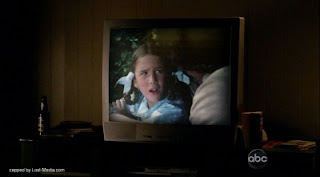 Sideways Sawyer brought a sunflower to Charlotte just like Island Sawyer did to Juliet last season. This one was less well-received though...

We got another patented Lost car crash towards the end there.

Sideways Kate was wearing a hoodie, just like Darth Charlie when he was revealed as Sawyer's accomplice in the "steal the guns" long con of season two's "Long Con" (the downside to Kate bumping into Sawyer: it probably means we're not done with Kate-centric episodes yet). 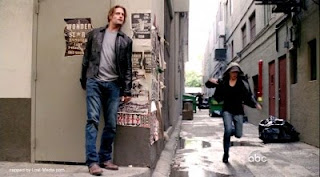 More rabbits: FLocke's flock was eating it for dinner.

A rant about returning characters: while I certainly don't mind seeing actors that have left the show return, thus far most of those returns have amounted to appearances in the flashsideways. This makes the flashsideways feel more like the initial flashbacks, with characters crossing the paths of other characters, ignorant of the connections they share, and that's all good. But when the producers announced that departed characters were coming back to the show, the implication (or, at least, my assumption) seemed to be that perhaps their returns would be in the service of answering some of the questions that still remain. Halfway through the season, it now seems that's not the case. As it stands, I have the sinking suspicion that, for example, Libby will come back, not to answer any of the numerous questions surrounding her but just to wave at Hurley in a flashsideways. 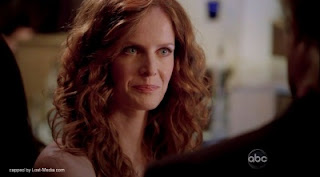 Questions Answered
Not really any question answered in this one, but I can just say I'm getting real sick of the scenes involving a character who knows stuff and a character who doesn't, in which the first character tells the other one how little he knows, but then fails to enlighten the ignorant character, and the ignorant character fails to question the knowledgeable one? It was cute earlier in the show's run, when we knew no one was going to answer anything, but now that we're at a point near the end where answers HAVE to be coming, every one of these scenes seems like more and more of a tease..."maybe THIS time the knowledgeable character will explain something...No? Well, it's gotta happen soon. Maybe THIS time?"

It's particularly annoying considering the writers seem to be sticking such a scene into every episode lately. I'm trying very hard not to judge each episode this season by how many questions it answered, and it's easier to do that in a stellar episode like "The Substitute" or "Dr. Linus", but right now, all I'm thinking is QUIT TEASING US ALREADY!

Questions Asked
When FLocke talks about having a crazy mom, how much of that is Smokey, and how much is Locke? Does Smokey have a mom? Was he human before he became a sentient cloud of smoke capable of taking the forms of dead people? 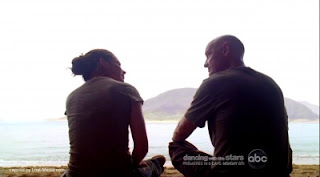 FLocke says he doesn't want to die; can he die (Dogen's sword to the chest didn't do much)? If so, why haven't Jacob/the Others tried to do so already?

Was FLocke sincere when he told Kate the only reason he told Claire the Others had Aaron was to give her something concrete to hate in order to keep her going?

Seriously, what's the deal with Widmore? Is he a good guy or bad guy? He seems to be against FLocke (what with the pylons and the deal with Sawyer) so does that make him a good guy? But Widmore insisted Locke go back to the island, and that resulted in FLocke, plus Ben hates Widmore and Ben is on Team Jacob, so does that make Widmore a bad guy? In which case, is FLocke really the good guy? But then, Jack, who's ostensibly the hero of the show, is on Team Jacob, and Jacob is opposed to FLocke, so FLocke must be the bad guy. So maybe Widmore's is his own side, allied with neither Jacob nor Smokey, and he's focusing on FLocke now before going after Jack, Ben etc?

Was Widmore the person to whom Jacob was referring when he said in "Lighthouse" that someone was coming to the island? If so, that could mean Jacob wants Widmore on the island, which could mean that Widmore is a good guy. Unless Jacob just wants him there because he knows he's important to the endgame, regardless of what side he's on.

Was Widmore still on the sub because, even though he's found the island again, he's still banished and can't physically come back to it yet?

So who's in the locked room on Widmore's sub? Desmond? Penny? Eloise? Another pile of explosives? Desmond? Can you tell I'm desperate for Desmond to come back? 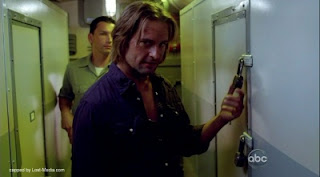 Who killed the rest of the Ajira passengers? FLocke or Widmore? 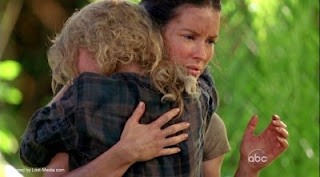 What happened to Sideways Kate between slamming into Sideways Sawyer and palling around with Sideways Claire?

Next Week: Ab Aeterno
Which, I assume, is Latin for "about damn time" considering it's the title of the Richard episode  for which we've been waiting. Hopefully the ABC promos aren't dicking us around again, and Richard will actually tell us his backstory, and not just tell us we that can't imagine what his backstory is, or something like that. 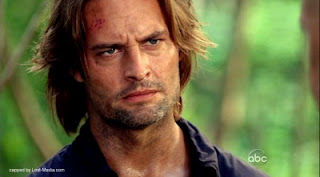