“The cork... is this island. And it’s the only thing keeping the darkness where it belongs.”

Ab Aeterno, Latin for "from the beginning of time", implicitly promised to finally shed some light on the enigma that is Richard Alpert. It did so, magnificently, while at the same time unexpectedly clarifying the overall purpose of the island, Jacob's role thereon, and the struggle between he and his nemesis in black.

Sidestepping the flash sideways and returning to the tried and true flashback, this episode beautifully unfolded Richard's story: he was brought to the island in chains aboard the Black Rock, sold into slavery after accidentally murdering a doctor while seeking medicine for his dying wife. Saved from death at the hands of his slave master by Smokey, Richard was ultimately approached by the Man in Black, who used a cruder version of the long con he employed on Ben to set Richard off on a Jacob-killing mission. After a beat down at the hands of Jacob (now both island powers have been shown manhandling Richard) and a surprisingly forthright explanation of the island's purpose and Jacob's role on it, Richard swore his allegiance to Jacob and vowed to serve as an intermediary between Jacob and the people he brings to the island.

Jacob's explanation that the island is keeping evil from spreading into the greater world (as illustrated by the wonderful wine bottle metaphor) was the most surprising revelation of the night, and suggests huge implications for the sideways reality. It's never been more clear that Jacob, while not easy or straight-forward, is the white piece on the board game of Lost, while Smokey is the black piece. But if the island is containing evil and the sideways reality is a world without the island, suggesting evil has escaped, then why do so many of the sideways' character seem to be better off in a world of uncontained evil? Is there a twist coming, something to suggest that evil must be released from the island? Did evil sink with the island? Or is the sideways world headed for an unimaginable catastrophe brought on by all the evil that is no longer stoppered by the island?

Stuff Worth Mentioning
Of all the things I expected to open the episode, a return to the Jacob/Ilana flashback from "The Incident" wasn't one of them. 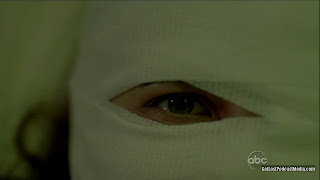 Richard's assertion that everyone is dead and the island is hell was a nice bit of fan service, and also echoed what Anthony Cooper told Sawyer while in the Black Rock's brig in season three's, uh, "The Brig".

As suggested by the blast door map in season two, Magnus Hanso was the captain of the Black Rock.

Smokey's murder of the slave master was similar to how he killed the pilot of flight 815 in "The Pilot".

Smokey's "flashing" of Richard was similar to what he did to Juliet and Kate in season two's "Left Behind".

It's probably not important, especially this late in the game, but when the Man in Black and Richard were talking, the Man in Black referred to Richard as "my friend" in the same way and with the same frequency as Caesar did last season (before Ben shotgunned him to death). 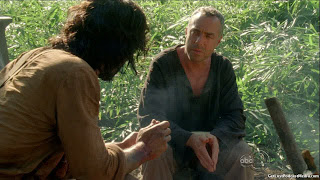 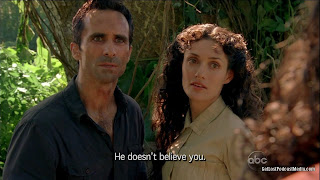 Like "The Other 48 Days", "Flashes Before Your Eyes" and "Meet Kevin Johnson", this episode told its flashback story uninterrupted.

I'm assuming at this point that the Others came about after Richard assumed his role on the island. Jacob said that everyone that arrived on the island before him was dead, so presumably, with Richard able to intervene on Jacob's behalf, more of the people Jacob brought to the island survived, and they became the Others.

The Black Rock was washed so far inland by a massive tidal wave, the same tidal wave which destroyed the statue. FLocke told Richard he was "happy to see him out of those chains" in "LA X" in order to let Richard know who FLocke really was.

Richard was a slave aboard the Black Rock. He agreed to serve as Jacob's liaison to the people Jacob brought to the island in an attempt to prevent those people from falling so easily under the Man in Black's sway. Because Jacob could neither resurrect Richard's wife nor absolve him of his sins, in exchange for his service he made Richard immortal so that Richard would never have to face judgment.

The gift of immortality Jacob bestowed upon Richard by touching him was specific to Richard.

The island is a cork that keeps evil from spilling out and covering the rest of the world.

The Man in Black believes people are inherently evil and corruptible. Jacob believes that left to their own devices, people are good and will choose redemption, so to prove the Man in Black wrong he brings people to the island, a place where they get a fresh start, where their pasts don't matter.

Questions Asked
Reasked from "The Incident" but how did Ilana get injured? What's her relationship with Jacob?

If Smokey killed everyone aboard the Black Rock, then how did the ship's log get off the island and put into the auction where Widmore bought it in "The Constant"?

The Man in Black said that Jacob took his body and his humanity...so whose body is he mimicking when he's talking to Richard?

What is it about that dagger that makes it able to kill (apparently) both Jacob and Smokey? 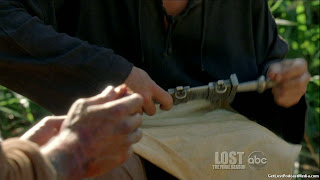 Probably not important, but how did Richard come to take the last name Alpert?

Where did the Others come from? Did Richard "found" them? Are their rules and way of life a product of Richard's interpretation of Jacob's desires, or does Jacob speak directly to the Others through Richard?

So, if the island is the cork that keeps the evil wine in the bottle, then are the Flash Sideways showing us a world in which that evil has escaped, or did the evil sink with the island?

Next Week: The Package
The inevitable letdown, made moreso by what looks to be a Sun episode. 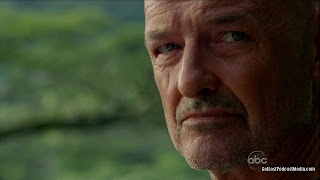