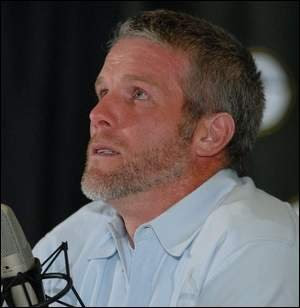 On Thursday, March 6th, 2008 Brett Favre (pronunciation: ˈfärv) held a press conference confirming his retirement. Although promising not to cry, the emotions of the situation proved too much and Favre could not hold back the tears. Within minutes of the conference starting Favre wept.
Brett Favre had many reasons as to why he decided now was the time to leave. Chief among the reasons was that football felt too much like a job now. It was getting too hard for Favre to be mentally prepared for every game.
As the conference was nearing a close Pete Dougherty of the Green Bay Gazette asked the question that was on everyone's mind.
"Brett, as always I'm honored to be in the presence of a god-like figure as yourself." Pete gave a slight bow before continuing his question. "When was the turning point at which you knew in your heart that this would be end?"
"Well, Pete," Brett looked directly into Pete Dougherty's eyes and a warming sensation poured over Dougherty's body. "I think I decided that I was going to retire the night before the NFC Championship Game. I was thinking about how cold it was going to be and how physical the Giants are and I began to get tense. I realized I wasn't looking forward to the game so much as I was dreading it. Football just didn't seem as fun as it used to be. So at that point I decided that no matter what happened in the NFC Championship Game I was going to retire after the season."
"Could anything have changed your mind?" Dougherty followed up.
"Well," Favre continued, "if I could have found something to relieve my stress, maybe things would have been different. I turned the TV on but I didn't find any of the shows entertaining. I was looking for something to make me laugh. Like maybe the high jinks of four single 30-somethings living in New York City."
"Well, gee, Brett," Dougherty responded, "that sounds like Seinfeld!"
"Yes, it does." Brett Favre looked towards the sky seemingly lost in his own thoughts. "Seinfeld is a very funny show. If Seinfeld was on that night I would probably be sitting here right now talking about how excited I am for next season."
Newer Post Older Post Home
Posted by Dr. Bitz at 8:59 PM