To Better Know A Hero: Aquaman

Aquaman didn't fare too well in our most recent (and perhaps most popular) poll, garnering 0 out of 9 votes. So I figured this'd be a perfect excuse to kick off a new feature: To Better Know A Hero. Hopefully this'll help shine some light on our fish-talking friend, and maybe get to the bottom of his poor showing in our 100% statistically relevant poll (and look for future entries to examine more of our favorite heroes and villains).

Aquaman
Real Name: Arthur Curry
First Appearance: More Fun Comics 73, November 1941
Nicknames and Aliases: Orin, the Sea King, King of Atlantis, Dweller-In-The-Depths
Powers and Abilities: Underwater breathing, superior swimming skills, enhanced strength, senses and durability, telepathy with sea creatures, including, on occasion, any being evolved from marine life (humans).
Weaknesses and Achilles’ Heels: During the Silver Age, when very specific weaknesses were in vogue at DC, Aquaman had to come into contact with water once an hour or die. This rule was laxed as time went by, and now Aquaman is merely weakened if he spends extended amounts of time away from water.
Gadgets and Accessories: During the early ‘90s, when it was all the rage for superheroes to become dark and emo, Aquaman grew long hair and a beard, and lost a hand to a school of telepathically-enraged piranhas and had it replaced with a cybernetic harpoon, and later, a mystical water hand. Super Friends often had Aquaman riding a jetski, for some reason, or various sea creatures, usually a sea horse. He has also used a staff trident from time to time. 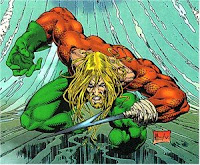 Friends and Allies: Mera (his estranged wife), Arthur “Aquababy” Jr. (his dead infant son), Aqualad (his fish-fearing sidekick-and check out those short-shorts on him, at left), Aquagirl (Aqualad’s girlfriend), Qwisp (his mischievous ally-think Bat-Mite or Mr. Mxypltzk), the Justice League, all the creatures of the sea (whether they like it or not).
Foes and Antagonists: Black Manta, Ocean Master, dry land
One-Sentence Origin: Son of a human lighthouse keeper and an Atlantean woman, Aquaman defends the seven seas as King of Atlantis.
Memorable Moment: Justice League of America Annual #2 (1984) in which, following a Martian invasion of Earth for which many of the Justice League’s big guns were absent, Aquaman invoked his right as a charter member to disband the League, and recreate it with new by-laws requiring a full time commitment from the members.
(Of course, Justice League: Detroit, as this era came to be known, with its mix of first string heavy hitters and newly created characters working out of a Detroit headquarters, is considered by most fans to be the low point of the Justice League, so Aquaman’s little venture didn’t turn out so great in the end.) 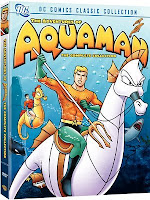 Fun Fact: In addition to his much-mocked role on the Super Friends show, Aquaman starred in his own cartoon series from 1967-1968 on CBS, which was repackaged with other DC character cartoons and aired in syndication well into the seventies.
Teebore’s Take: Look, it’s easy to make fun of Aquaman-like shooting fish in a barrel really. Aquaman entered the public consciousness thanks in large part to the Super Friends cartoon, and that show didn’t do him any favors. His weaknesses and powers made it so that he was only useful on the rare instances that a mission involved water. Aquaman always needed rescuing, and was thus about as useful as Wendy, Marvin or the dog. Batman and Robin don’t even have super human powers, and they consistently handled themselves better than Aquaman.
But the fact remains that Aquaman has been a long lasting, solid B-list character for almost his entire publishing history. He is one of only five DC superheroes to survive the transition from the Golden Age to the Silver Age more or less intact. He is, for the most part, a mainstay of the Justice League, and poorly perceived or not, well known outside the super hero comic book culture.
The biggest problem facing Aquaman (aside from his Super Friends-inspired public image) and preventing him from achieving true A-List status (and headlining a book for a consistent length of time) is the limitation his character puts on the kinds of stories in which he can feature. You can either play up the “king of Atlantis” angle, creating a fantasy-themed book with narrower audience appeal (which Aquaman’s most recent series did), or write Aquaman straight-up as a super hero, in which the stories you can tell are handicapped by the fact that any Aquaman adventure has to take place in or around water and sea creatures. 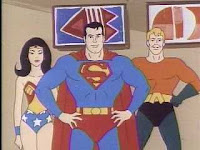 Email ThisBlogThis!Share to TwitterShare to FacebookShare to Pinterest
Labels: To Better Know A Hero