A few things too big for One Sentence Reviews and too small for posts of their own...

Baseball's Back, Baby!
The Major League baseball season kicks off for real (not counting time traveling games in Japan and ceremonial new stadium kick-off games) today, and it feels great to have it back. This is a great time of year: the season is young and full of promise (unless you're a Giant or an Oriole), everyone's "had a great spring" and is "going to be fun to watch." The stink of reality hasn't set in yet, and spring is in the air (not here in Minnesota, of course, where six inches of snow just fell. Can I just say it was weird listening to a Twins game while driving in a snowstorm?).

"Gonna be a tough year, isn't it Joe?"
"Sure will be, Justin, sure will be..."
Yeah, the Twins are probably going to suck it up big time this season. Frnakly, they'll be lucky to finish over .500 and third in the division. But hey, there's always Fantasy Baseball, and since all your Gentlemen are playing in a league together, you're sure to hear an award-winning combination of belly-aching and boasting about it. For instance, let me just go out on a limb and say that my team is going to DEMOLISH the competition this year. I mean, come on, Jim Thome hit two home runs today. Two! At that pace, I figure he alone'll give my team upwards of 260 home runs. Beat that, Skynet and Emotionally Involved w/Wooden Objects! 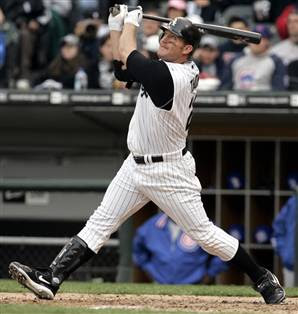 This was the kind of movie that is neither good enough nor bad enough to really care about. I mean, it was an enjoyable enough piece of fluff, not a bad way to kill a couple of hours on a Friday night. But it was incredibly predictable. The direction was so lackluster it felt like a film class project instead of a major motion picture. Still, it was fun, and it made me want to play some blackjack. It also made me want to read the book to find out how much of their "system" was made up for the film and how much was real. So there's that. But not a lot to get too worked up over, good or bad.


Moving Day
The Teebore's are staking our claim to a new homestead this weekend, which means I'll be spending my time on that most hated of activities: moving. I don't like moving because it makes me resent all my stuff. I have tons of stuff: books, DVDs, comics, action figures, random Star Wars memorabilia. I'm a compulsive collector and a geek. Whenever a moving day draws near and the idea of having to haul it all around makes me start to resent my stuff. Usually we get along swimmingly. I don't like it when we quarrel.

But on the upside, with this move, I'll finally be able to free my entire comic book collection from its purgatorial storage at my parent's house and deliver it once and for all into my waiting, paradisaical embrace. Teebore and his comics will be together again.