On Monday, March 24th, 2008 the Twins signed Joe Nathan to a 4 year contract at approximately 12 million dollars per year. Yes, THOSE Twins. The very same Twins who were so cheap they didn't try to sign Torii Hunter and traded away the best pitcher in baseball. Apparently they felt that a good closer is worth paying for despite this team most likely not being in many save situations at the end of games.
Also on Monday I went to a concert. It was the Breaking Benjamin/3 Days Grace concert at the Target Center. It was good considering all I really wanted to see was Breaking Benjamin while 3 Days Grace and Seether do little for me.

Halfway though Breaking Benjamin's great performance Benjamin Burnley, the lead singer of Breaking Benjamin, stopped to introduce "two of his friends." Benjamin said that his friends were going to sing a song while he passed out a case of bottled water. So his friends sang and Benjamin Burnley walked around the stage and into the crowd passing out bottles of water.
I view the Twins signing Joe Nathan and Benjamin Burnley handing out bottled water in the middle of his set the same way, with complete and utter confusion.
I don't know why Benjamin thought passing out water was good idea. Does his throat get tired so he needs to rest it? Did he just want to 'give back to the fans' and felt the one thing the fans would really want is water? Did he just want to give his friends a chance to sing in front of a crowd? I just don't get what the bottled water was all about.

Why did the Twins sign Joe Nathan? Did they feel it would increase his trade value? Did they want to appease fans who have the audacity to call them cheap? (Who would do a thing like that?) Do the Twins really feel that Joe Nathan will help them win and that signing him is a good investment for the future? I just don't understand.
It's not like I'm opposed to these things. I've been begging the Twins to spend money and keep good players since this blog started. And it's not like I'm against the lead singer of a band giving out free stuff. If I was dying of thirst in the desert I'd certainly want to come across Benjamin Burnley rather than this guy! But why break up the flow of a concert just to give out water?
As far as the Twins are concerned, I've always felt that a good closer was more 'the final piece' of a puzzle that will take a baseball team from good to an elite level. The Twins seem to consider Nathan one of the first pieces you make sure to keep while entering a rebuilding year.
I'm not sure what to make of either of those things. But perhaps the Twins and Breaking Benjamin are simply just smarter than me. Feeling like I'm missing something is definitely not a new sensation for me. So, for now, I guess I'll just keep wondering the land of confusion...whoa-oh-oh. 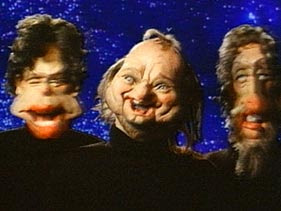