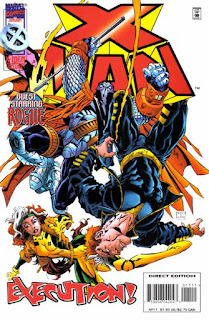 In a Nutshell
Nate & Rogue battle the X-Cutioner

Plot
As the X-Cutioner prepares to attack his next target, Nate, flying away from his fight with Xavier, crashes onto the beach near Rogue. Worried about losing control of his power, he blasts her and flies off again, but crashes into the ocean when his powers burnout, forcing Rogue to pull him out of the ocean herself. Meanwhile, Xavier warns Moira MacTaggert about Nate. Back in North Carolina, Nate wakes up, and once Rogue makes it clear she's not currently associated with the X-Men, he asks her what she knows about Moira & the Legacy Virus, both of which he has recently learned about. Just then, the pair are attacked by the X-Cutioner, who is targeting Rogue. Though Nate easily overpowers him, the X-Cutioner has better control of his weapons than Nate does his powers, and thus is able to hold his own until Rogue joins the fray. Together, she & Nate easily defeat the X-Cutioner, who teleports away as Rogue warns him that next time he attacks, she won't be so kind. After he leaves, Rogue tries to convince Nate to see Xavier, but he insists he won't. So instead, Rogue suggests he visit Moira, and offers to put in a call with her as Nate flies off, bound for Muir Island.

Firsts and Other Notables
Rogue, who has made it to North Carolina from Seattle since she last appeared in X-Men #45, guest-stars in this issue; her relative estrangement from the X-Men enables her to talk with Nate, and helps get him pointed in the direction of Moira and Muir Island (setting up the events of next issue). 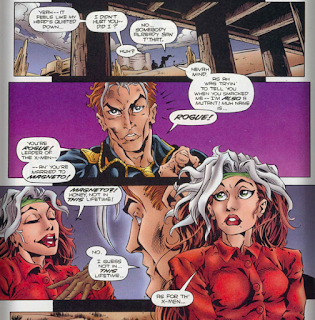 X-Cutioner, making his third appearance, ably continues his run as a "villain who shows up and gives the heroes someone to punch while they deal with more important things" villain in this issue. 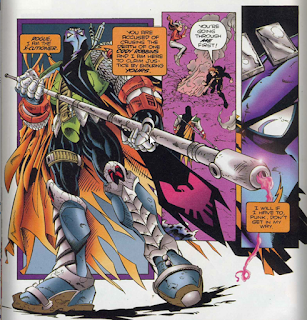 The title of this story hangs a lampshade on the fact that the X-Cutioner shares a name with the central noun in the title of the X-books first post-'91 relaunch crossover.

A Work in Progress
The X-Cutioner notes that while Fred Duncan (his FBI agent partner who worked with the X-Men during the Silver Age) maintained files on all the X-Men and stockpiled weapons used by their enemies, he didn't see mutants as something to be feared and hated. 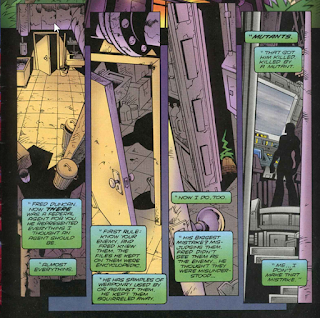 Meanwhile, the X-Cutioner insists that he doesn't carry a grudge against all mutants, just the ones that go rogue (which is clearly meant to be a pun on the fact that he's targeting Rogue this issue). 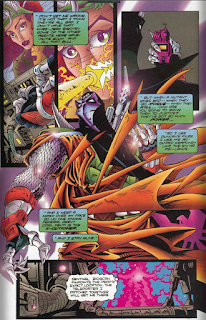 Moira notes that not even Phoenix could manifest astral forms on the physical plane, while Xavier tells her he's alerting everyone in the mutant underground to look out for Nate.

Nate recognizes Rogue as a leader of the X-Men and the wife of Magneto, though he quickly realizes that's not true in this reality.

The X-Cutioner is targeting Rogue for "attacking" Cody Robbins, the boy she put into a coma when her powers first manifested themselves.

The X-Cutioner's sensors read Nate as Cable (whom X-Cutioner battled in Uncanny X-Men #310). 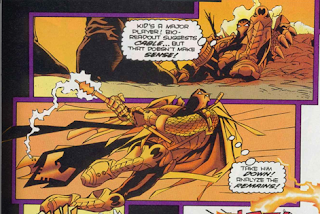 Austin's Analysis
Continuing the upward climb out of the garbage pile begun last issue, this issue improves on the vast majority of this series' post-AoA issues in two ways: for one, it is drawn entirely by Steve Skroce, meaning there are no awkward page-to-page (or even panel-to-panel) cuts to another artist, disrupting the flow of the story. For another, it continues the series' recent flirtation with the larger X-universe. While Nate still remains apart from the X-Men (and the events of last issue unfolded specifically to keep him away from them longer, for whatever reason), last issue and this one at least finds him engaging with characters that are a part of that world, with the promise of more similar interactions to come.

Nate has, thus far, been a largely solitary character with no connections to anyone (by dint of coming from another reality), and even when attempts are made to give him some kind of supporting cast (like the resurrected Madelyne Pryor), they disappear quickly. Thus, we're left more often than not inside Nate's head, and he's not a complicated (or interesting) enough character to make that enjoyable (it also contributes to his general passivity, because he has very little to motivation to act proactively). Thus, anytime an issue finds him interacting with a known commodity, it feels like a breath of fresh air. Clearing a low bar, certainly, but with this book, I'll take it.

Next Issue
Next week: Bishop struggles with his memory in X-Men (vol. 2) #48, Cable battles Shaw & Holocaust in X-Force #50 and Landau, Luckman & Lake make their move in Wolverine #97!