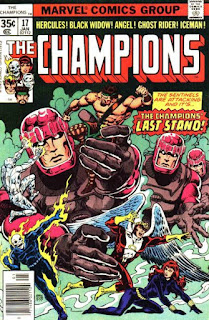 In a Nutshell
In the final issue of the series, the Champions battle Sentinels sent by the Brotherhood of Evil Mutants

Plot
Black Widow & Hercules are enjoying a quiet evening at Champions headquarters when the Brotherhood of Evil Mutants - Blob, Unus, & Lorelei - burst in, followed closely behind by a group of Sentinels. Offering the mutants sanctuary, Hercules attacks the robots while Black Widow signals the rest of the team for help, unaware that her call for help fits the plans of a mysterious figure watching from the shadows. Outside, Angel is flying above the city when he spots Black Widow's signal, and quickly gathers the rest of his teammates. The combined Champions defeat the Sentinels, at which point the Vanisher emerges from the shadows, revealing that he and the Brotherhood are working together, using the reprogrammed Sentinels to stage an attack in order to lure out the X-Men after killing Angel & Iceman. But Darkstar intervenes, re-animating one of the Sentinels to attack the Brotherhood. When Vanisher attempts to teleport away, she uses her Darkforce power to trap him mid-teleport, with half his body elsewhere. Frightened by what she's done, she seeks comfort from Iceman, while the rest of the Champions wonder what they can do now.