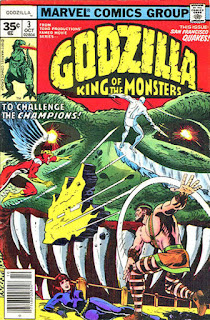 In a Nutshell
The Champions try to stop Godzilla's San Franciscan rampage!

Plot
As Godzilla approaches San Francisco, threatening the Golden Gate bridge, the Champions spring into action, flying their Champscraft to the city. Arriving on the scene, Angel distracts the monster while Iceman creates an ice ramp to get the pedestrians off the bridge. As Godzilla turns for the shore, Black Widow & Hercules prepare for his arrival, with Hercules managing to toss the creature back into the bay. Just then, the SHIELD Godzilla Squad, led by Dum Dum Dugan, arrives on the scene. He is dismayed to see the presence of superheroes, and as he and his team attempt to capture Godzilla without causing further damage, the Champions' well-meaning efforts to stop Godzilla trip up the agents, causing Godzilla to lash out and destroy the Golden Gate Bridge. Hercules, hoping to finish Godzilla once and for all, hurls a piece of the bridge at his head, but Godzilla dodges it, causing the piece to collide instead with SHIELD's helicarrier, sending it crashing into the bay. As Godzilla, seemingly bored, wanders back into the ocean, Dugan admonishes the Champions: thanks to them, the bridge is destroyed as well as the helicarrier, and Godzilla is none the worse for wear. As the Champions depart, Black Widow thinks to herself that the Champions still have much to learn about being a team.