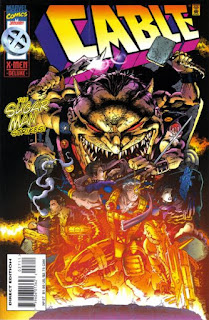 Plot
In the midst of the battle between the Genoshan rebels & the Magistrates, Cable recognizes Pipeline & Hawkshaw from their encounter at JFK airport. As the rebels begin to overwhelm the Magistrates, Pipeline teleports them all out, but Cable, prepared for the move, manages to knock him out before he gets away. In the aftermath of the fight, Phillip Moreau tells Cable about the rebels' recent assistance from the mysterious Essex, and they discuss the growing likelihood that Phillip's father didn't create the mutate bonding process himself. Deciding to investigate, Cable urges Pipeline to help the rebels and end the destructive madness in Genosha, but when he refuses, Cable telepathically takes over his mind in order to teleport himself, Cable, Domino, Phillip and Jenny Ransome to Genosha's Ridgeback Mountains, the site of bizarre energy readings. Following the readings, they discover a cave obscuring the entrance to a high tech lab, confirming Phillip's suspicions about his father's work. However, the group is being unknowingly watched by both Mr. Sinister and Sugar Man, the latter of which prepares to defend his work from those who seek to take it all away from him.

Firsts and Other Notables
The whole "Sugar Man created the Genoshan Mutate bonding process and gave it to the original Genegineer" retcon gets closer with this issue, as Phillip's suspicions that his dad didn't work alone increase and Cable's investigation draws in on Sugar Man's lair.

Gunshot, a new member of the superpowered Magistrate Press Gang whose name suggests the 90s have just given up, makes his first and only appearance in this issue. 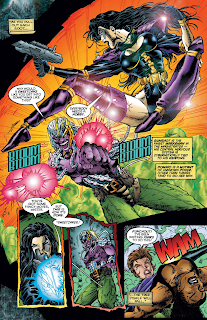 A Work in Progress
Sugar Man recognizes Cable as like Nate Grey, but not Nate Grey, much to his dismay. 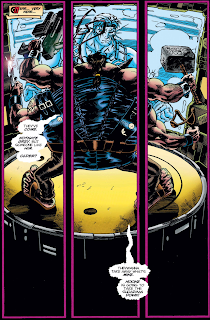 Austin's Analysis
One of the striking things about this issue is the way it - largely unintentionally - showcases how much Cable has changed as a character. Here is big muscular Cable, the guy synonymous with big guns and the "shoot first, ask questions later" ethos of the early 90s, getting dropped into a pack of rebels fighting in a Genoshan civil war, and he's hurling gas grenades to quell the fighting between the Magistrates and Rebels instead of explodey ones, serving as the voice of measured response and "let's get to the bottom of this" when presented with the mystery of Essex & Phillip's father. This is all largely unintentional - coming as it does in the middle chapter of three part story that is designed chiefly to setup the Sugar Man Genosha retcon to which Cable himself brings very little in terms of narrative or thematic relevance - but something about the Genoshan setting and putting Cable in a "fighting for their lives" scenario, then making him the calm, inquisitive one, sticks out.

Where Cable was initially cast - certainly in his earliest New Mutants appearances but even at the start of this series - as an anti-hero reacting against the norms of the superhero genre, this issue finds him playing the role of a much more traditional superhero: downplaying violence (at least in terms of more real world-approximate sectarian violence vs. hyper-stylized superhero violence), emphasizing the need for truth & knowledge to guide actions, even just using his mutant powers instead of a gun or other traditional weapon. Again, none of this is new for the character: it's the progression he's been on more or less since Rob Liefeld left the X-books, and certainly since Jeph Loeb took over and began tweaking the character to make him work as the lead of a solo superhero book. It's just a transition that happened so gradually it didn't really stick out until now.

Next Issue
Next week: Sabretooth is on the loose in Sabretooth Special #1!