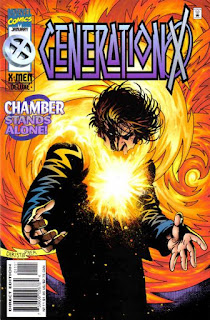 Plot
Chamber pulls himself out of the river to find Omega Red standing over the bodies of his teammates. He fights him off, then is relieved to discover his teammates are still alive. Skin weakly tells Chamber Omega Red is afraid of him, since his death spores don't affect Chamber, and urges him to go after Omega Red. Meanwhile, Emma Frost is still inside Banshee's mind, and watches as he meets up with Interpol Inspector Deveraux. At the school, Jubilee worries about Penance, but Mondo assures her everything will be all right because Penance has a friend who cares about her. Elsewhere, Chamber catches up to Omega Red at a nearby dam. In Banshee's mind, Emma sees Banshee & Deveraux confront the serial killer they're chasing: Arkady Rossovich, the man who would become Omega Red. She watches as Arkady kills Deveraux, and Banshee shoots Arkady a dozen times. At the dam, Chamber manages to overpower Omega Red, sending him flying across the dam, after which he runs off. Later, everyone gathers at the school and a recovered Banshee tells everyone how proud he is of them, but they don't know that Emplate is spying on them from a distance, as he prepares to launch his attack and retrieve Penance.

Firsts and Other Notables
This issue elaborates on Banshee's previous encounter with a pre-Omega Red Omega Red while Banshee served as an Interpol agents, and confirms that this the encounter Banshee was dreaming about when Emma slipped into his dream in issue #7. 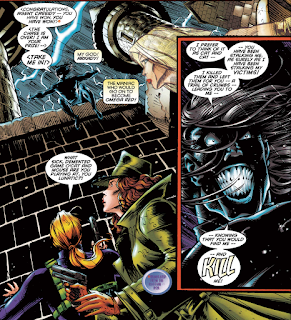 Emplate is shown to be spying on Generation X via some kind of mutant with the ability to hear over long distances and shout what he hears? I have no idea who this is and whether he appears anywhere else (Emplate will launch the attack on the team he's been planning since X-Men: Prime starting next issue). 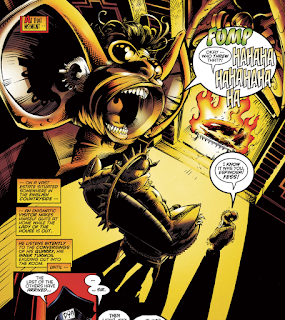 Creator Central
Todd DeZago helps Lobdell out with the script on this one, while Val Semekis fills in for Tom Grummett filling in for Chris Bachalo.

A Work in Progress
A narrative caption notes that Chamber doesn’t need to eat, drink, or breathe as a result of his mutation. 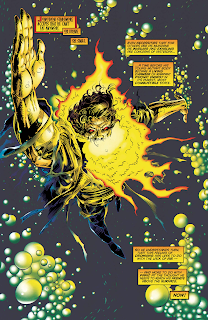 Young Love
The Chamber/Husk will-they-won't-they continues, with Paige thanking him for saving them, and Chamber beating himself up for not telling her how he feels. 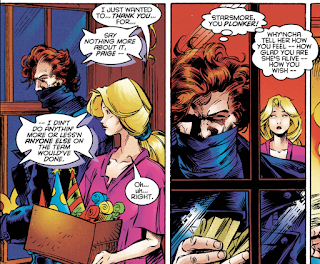 Austin's Analysis
Another little two-parter wraps up here, and after all the build-up to Omega Red's appearance in the last issue, it feels a little like a let-down, as it's much less "Omega Red vs. Generation X" than "Omega Red vs. Chamber", while Emma roams about Banshee's mind, discovers he encountered a pre-Omega Red Omega Red and has some guilt over the loss of an Interpol colleague. All of which is fine; nothing here is bad, per se (it's really the first time Chamber has been shown cutting loose, which is nice to see), but it's all kind of light & ephemeral. It's not unlike the previous Cassidy Keep/faerie story in that regard, and like that story, it's hard to read this and not wonder if it would be better if Chris Bachalo - or even Tom Grummett - was around to draw it, lending some artistic impact to the issue even if the narrative is relatively sparse.