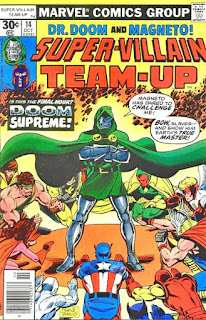 In a Nutshell
Magneto teams up with Beast to take down Dr. Doom

Plot
Magneto storms into Latveria and confronts Dr. Doom, proposing an alliance between the two to rule the world. But Doom reveals he already rules the world: he released a gas into the atmosphere which puts everyone in the world - including Magneto - under his control. But bored with the ease of his victory, he proposes a challenge to Magneto: Doom will release Magneto and allow him to attempt to free the world from Doom's control. Magneto proceeds to Avengers Mansion to seek their help, but they of course think he's attacking them. Magneto manages to overpower the Avengers without causing serious harm, but when he explains his purpose, he discovers the Avengers are already under Doom's control. Just then, Doom appears before Magneto and allows him to select one Avengers to aid him; Magneto chooses Beast. After he frees Beast from Doom's control, the pair seek out additional allies, but find both the Fantastic Four & X-Men to be away. Beast then brings them to Los Angeles, where his old teammates Angel & Iceman are now part of the Champions, only to discover that the Avengers have warned the Champions about Magneto, and they believe Beast has joined him in his villainous ways!