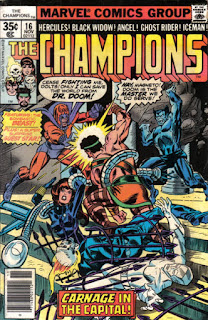 In a Nutshell
Magneto & Beast battle the Champions & Hulk to free the world from Dr. Doom's control

Plot
Seeking help to defeat Dr. Doom, Magneto & Beast are instead attacked by the Champions, already under Doom's control. Overhearing that Doom has arrived at the White House, Magneto gives up on seeking aid and heads there with Beast, but the Champions follow close behind them via Darkstar's powers. At the White House, Doom grows increasing bored with the fawning politicians paying him homage just as the Hulk appears, under Doom's control. Just then Magneto & Beast, followed by the Champions, arrive, and a melee breaks out between Magneto, Beast, Hulk, the Champions, Doom and the US Army. In the course of the fight, Ghost Rider, who is free of Doom's control thanks to his inability to breath while in in his Ghost Rider form, blasts Doom with hellfire. This causes Doom to rip off his mask, at which point, he breathes in his own mind control gas without his mask to filter it out. This causes a feedback loop, as Doom can neither do as Doom commands nor issue new commands, effectively nullifying his control over the world. As everyone returns to their senses and the fighting stops, Magneto considers it a victory and departs, leaving behind a babbling Doom, a man who rules the world but not himself.