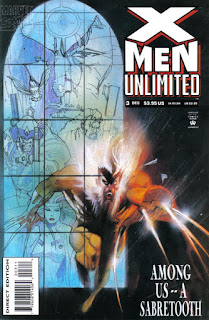 In a Nutshell
In the wake of Birdy's death, Sabretooth comes to Xavier for help quelling his homicidal rages.

Plot
Maverick tracks down Sabretooth, who is growing increasing unhinged & slaughtering everyone involved in a deal gone bad, to a monastery in Barcelona, but Sabretooth manages to escape. Meanwhile, a man named Geinstach, who was also involved in the deal, meets with Commcast, hoping to hire him for protection. Instead, Commcast suggests Maverick or Wolverine. Maverick infiltrates the X-Mansion, hoping to get Wolverine's help, but Xavier offers the X-Men in light of Wolverine's absence. Meanwhile, Sabretooth meets with Commcast, looking for a telepath; he directs him to one affiliated with the Yashida clan in Japan, then contacts Maverick to give him a lead on Sabretooth. The X-Men split up, with Rogue, Gambit & Bishop going to Frankfurt to protect Geinstach, only to find him dead.. In Japan, Beast & Maverick are greeted by Silver Samurai, and they attempt to stop Sabretooth, but when he discovers the telepath has been incapacitated since the bombing of Hiroshima, Sabretooth runs off, and Beast knows where he is going: to Professor X. Later, Sabretooth sneaks into the school and finds Xavier in the library, but Xavier stops him with a telepathic blast, then enters his mind. Observing scenes from Sabretooth's childhood, he tells him Sabretooth has the ability to choose not to kill. Xavier will help him overcome his homicidal urges, but not by suppressing them the way Birdy once did. Sabretooth agrees, then later bemoans that he is essentially a prisoner. Xavier tells him it could be worse, but that he'll cure him, and then Sabretooth will pay for his crimes.

Firsts and Other Notables
Following up from the events of the Sabretooth limited series, this finds Sabretooth growing increasingly mad in the absence of the telepathic Birdy, as his animalistic side gets stronger without her periodic "glows" to quell it. This ultimately leads him to track down Xavier, who agrees to house Sabretooth in the mansion in an effort to end his bloodlust once and for all, beginning a long period of time in which Sabretooth is effectively kept under house arrest by the X-Men (it will last until 1995 and roughly two years' worth of stories), after which he'll serve on X-Factor, so it'll be awhile before we have "regular" appearances by Sabretooth in which he's just a homicidal mutant with a particular grudge against Wolverine. 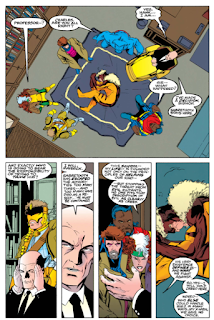 At the very end of this issue, we see Sabretooth talking with Xavier while wearing silver gloves; those gloves, along with a matching muzzle, will become part of Sabretooth's regular attire during the early days of his stay at the mansion, as they allow him to move about while keeping (theoretically) unable to kill (or at least, unable to use his claws and teeth to kill). 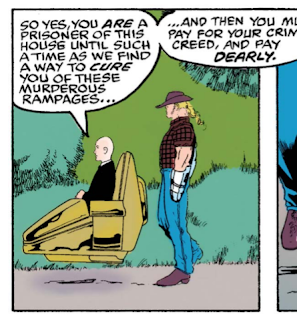 Maverick guest stars in this issue, standing in for Wolverine as the "character who has a past with Sabretooth and is willing to kill" amongst the other X-Men. 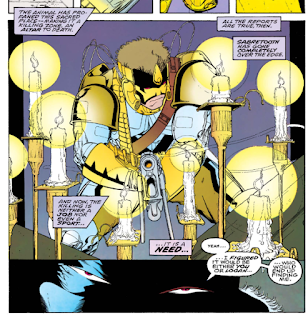 CenturyLink Commcast, from the Deadpool miniseries, pops up briefly as well; this is his final appearance for a few years (he'll next pop up for an issue of Nicieza's Thunderbolts, and then in the 00's Cable & Deadpool series). 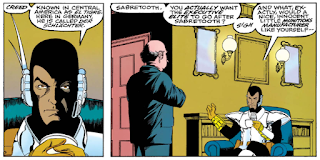 The issue closes with a pinup of Sabretooth and Maverick fighting. 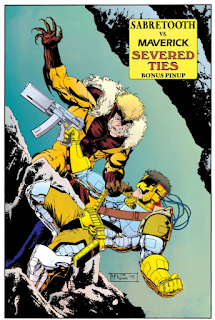 Throughout this issue, Nicieza uses the characters to espouse a "no killing" ideology, chiefly to setup, in part, Xavier's rationale to bring Sabretooth into the mansion. First, Rogue says that being part of the X-Men helped prevent Wolverine, Rogue, and Gambit (all villains and/or characters with looser morals before joining the team) from being worse. 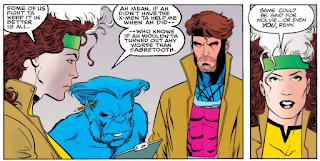 Later, Beast argues that everyone suffers from animalistic urges, and the goal should be to tame the beast, rather than kill it. 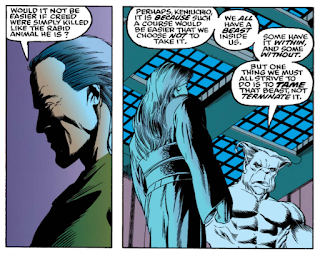 It's an interesting thing to consider. When it comes to superhero comics, I am generally anti-heroes killing, both because I think superheroes should represent the best of us, and because, as Golden Age writers can attest, it's hard to come up with memorable villain after memorable villain when they keep getting killed immediately after being introduced (the best villains get that way via repetition and repeat appearances, developing history with their heroic foes; killing them off robs them of that ability). At the same time, as comics move further away from "zany schemes" and have villains committing more heinous real-world crimes (like indiscriminately killing people, as Sabretooth does here), it gets harder to argue with a hero not killing that villain, given the chance, and sparing future innocent deaths (this was, of course, the central thematic argument behind Spider-Man's multi-part "Maximum Carnage" storyline, the same year this issue was published). The events of this issue aren't nearly on the same scale as that (or, for example, all the people the Joker kills after escaping from Arkham for the umpteenth time), but at the same time, I did find myself considering the two Yashida guards who Sabretooth killed at the same time Beast was explaining to Maverick why they shouldn't kill Sabretooth. I mean, for all we know, they were just punching a clock, with families at home, and now they're dead because the X-Men want to tame Sabretooth instead of killing him, and that's all well and good, but it doesn't help those two guys (incidentally, my preferred solution to this kind of moral quandary isn't "have superheroes kill", it's "stop having so many villains obviously and casually killing so many people"; it's a lot easier to justify Batman not killing the Joker if the Joker only ever *tries* to kill a lot of people, but is always stopped by Batman985555555555).

The Chronology Corner
This story takes place after "Bloodties" (and Cable #6-8), with Xavier appearing here before Uncanny X-Men #308.

A Work in Progress
It's noted that since the death of Mariko, Wolverine won't travel to Japan; we'll have to see if that holds up in his solo series (I suspect it doesn't). 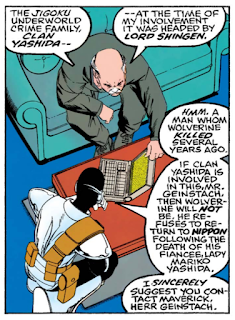 Maverick learns that Wolverine has left the X-Men. 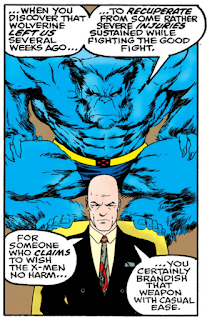 File "stole something from the Yashida family" amongst the other hints at Gambit's shady past. 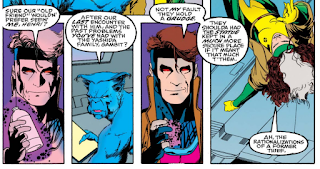 Sabretooth also says that Gambit has a history of betraying people, something that mostly holds up when we eventually learn more about their past together. 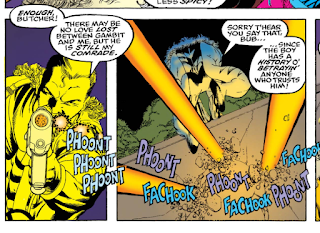 For what it's worth, we see Maverick (from behind) without his helmet for the first time in this issue. 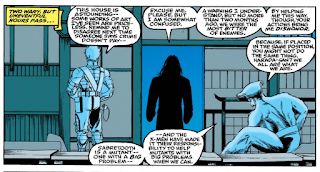 When Professor X appears on the Astral Plane in Sabretooth's mind, he is wearing one of the school training uniforms. He notes that he recently spent some time where Sabretooth usually lives, and didn't like it, a reference to his extreme actions against Magneto in X-Men #25. 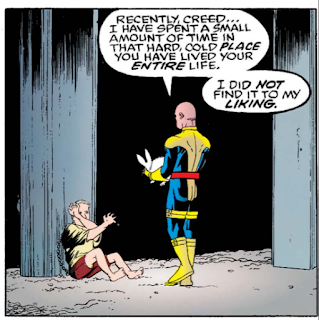 Claremontisms
Rogue says that one can always tell where the X-Men have been thanks to the destruction they leave in their wake.

Austin's Analysis
In terms of linewide narrative impact, no issue of this series thus far has been as significant as this one, as it introduces a new status quo that will stand for roughly the next two years, as Sabretooth becomes a fixture in the X-mansion and gets regularly pulled in to various plotlines. On the surface, this seems like a cheap way to get a Wolverine-esque character back into the fold while Wolverine is away dealing with not having adamantium, and while there's some truth to that, in execution, the plotline becomes much more than that (in part because it continues well after Wolverine returns, and in part because Sabretooth never really gets pressed into the Wolverine role, at least not for any extended period of time). While it arguably goes on a bit too long, the various X-writers across several different titles use the presence of Sabretooth in the mansion and Xavier's unilateral decision to keep him there to generate some interesting stories, up to and including playing a minor role in the development of Onslaught, amongst other things.

As for this issue itself, it mostly works to bridge the gap between the Sabretooth mini and the new status quo. Sabretooth's madness (and desire to find a cure) is perhaps a little rushed and underdevloped (and I barely made an attempt to follow the overarching plot involving Sabretooth hunting down the players in a deal gone bad, which was mainly just a means to a very specific end), but Nicieza gets some decent mileage out of the "ethics of killing a foe" discussion, which also helps sell Xavier's decision at least in the context of this issue's story. McKone's art is a little incongruous, being brighter and more cartoon-y than the subject matter might call for, but the juxtaposition in tones between the script and the art helps underscore Sabretooth's inner conflict, and I appreciate the desire to do something other than the expected "moody and atmospheric" art for this kind of a story.
Ultimately though, this issue is more significant in terms of the other, later stories it sets up, than for anything that unfolds in its pages (in other words, it's ending is its most important feature), but it nevertheless does a lot to help X-Men Unlimited feel like a necessary book where stuff happens, and not just a dumping ground for annual-style inventory and filler stories.