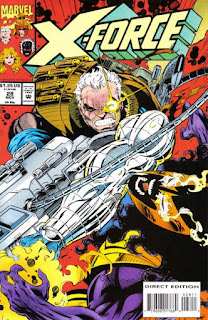 In a Nutshell
Feral defects and Sunspot disappears as X-Force battles the MLF.

Plot
As Cable battles Reignfire, Feral escapes with Gyrich, who needles her along the way. Elsewhere, X-Force turns the tide against the MLF. As Feral & Gyrich make a break for X-Force's ship, Feral finally snaps, and turns on Gyrich, but Tempo stops her from killing him. As the larger fight spills outside, Cable is forced to stun Feral, who is retrieved by Reignfire as he calls for the group, sans Tempo, to retreat. But as Locus prepares the teleport the MLF away, Sunspot uses his power to fly up and blast her, causing feedback which disrupts the teleport, sending the MLF, and Sunspot, to parts unknown. Back on the island, Gyrich insists his views on mutants haven't changed, causing Cable to slug him, angry that all their sacrifices that day had been for nothing.

Firsts and Other Notables
Tony (here Antonio) Daniel, the series new regular penciler, makes his debut this issue after drawing the series' second annual. He'll stick around through the first half of the book's "Age of Apocalypse" alternate title His work here seems a little rougher than in the annual (and while it's very rudimentary and not terribly good, I still like it better than his contemporary work).

This issue marks a pair of departures from the series. First, Sunspot disappears as the MLF escapes, getting caught up with Locus as she teleports away. This ultimately is the setup for his transformation into Reignfire, as it will eventually be established that he and Locus end up in the future as a result of their confrontation here, and Sunspot will be absent from the book until after "Age of Apocalypse". Secondly, Feral quits the team and throws in with the MLF, fed up with putting her life on the line to protect Gyrich (who does a tremendous job of needling Feral throughout the issue). Though she'll appear again here and there through the years (including a two-part story that explores more of her past about a year from now, and Jeph Loeb's stupid "all animalistic mutants are related" story in Wolverine), this effectively marks the end of Feral as a significant, ongoing character. 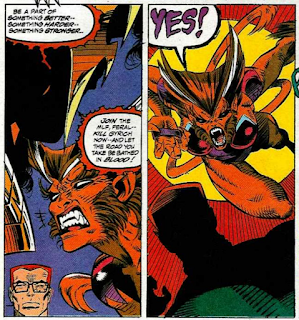 Sunspot gets tangled up with Locus thanks to utilizing his powers to fly for the first time, a manifestation of his power that will stick around after his return. 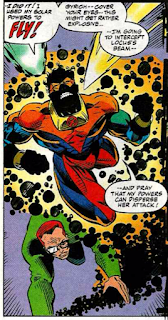 Tempo, long established as the most conflicted (and arguably characterized) member of the MLF, breaks with the team this issue, helping save Gyrich and staying behind as the rest of the group escapes. 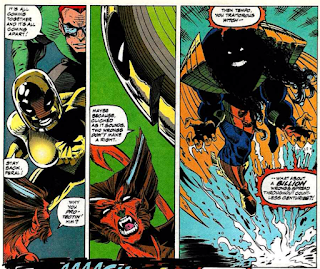 A Work in Progress
It's revealed here that Reaper lost another hand to Shatterstar last issue (something that wasn't clear last issue), continuing the running gag of Reaper losing limbs during fights with X-Force. 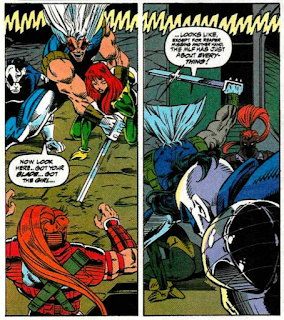 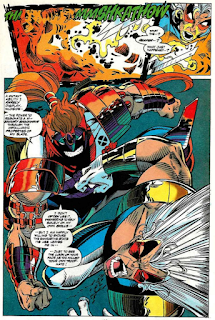 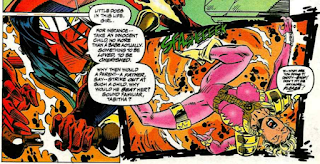 Cable is surprised to learn that Reignfire knows his (full) name.

The Grim 'n' Gritty 90s
The credits of this issue feature Stan Lee presenting a litany of acronyms describing the story.

Pun with Peter Cable
After Reignfire urges Feral to flay Gyrich, Cable chastizes him, saying he's trying to teach X-Force there's a time for work and a time for flay. 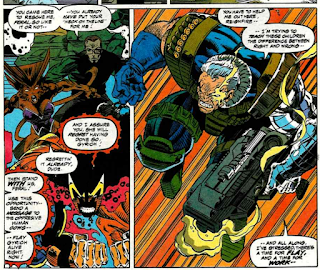 Austin's Analysis
Nicieza uses the conclusion of X-Force's first battle with the new Mutant Liberation Front to shakeup the roster further, writing out both Sunspot and Feral in the process. The former will be back before too long (with his depature here ultimately part of a longer storyline Nicieza is developing), but this effectively marks the end of Feral as an ongoing presence in the series. As such, it can be read as another way Nicieza is chipping away at the series' Liefeldian roots and transistioning it into more of a New Mutants legacy title. Outside of Shatterstar, Feral is arguably the most Liefeldian character left in the series, and while Shatterstar's ties to the Mojoverse and Longshot give him a connection to the larger X-universe, Feral's past as a Morlock hasn't been relevant since the early issues of this series, leaving her as little more than a parody of early 90s trends (Cable, of course, has already been stretched beyond his Liefeldian origins, a process that will only continue). Having her defect to the Mutant Liberation Front not only strengthens the rivalry between the two teams, but immediately injects Feral with an added layer of complexity: no longer is she just the one-dimensional Wolverine clone chafing to cut loose, now she's the fallen teammate taken up with the team's mortal enemies, the one member of the team for which X-Force wasn't extreme enough, the soldier who decided she'd rather be fighting for the other side. That it also means readers won't have to deal with her as much moving forward is just an added bonus.