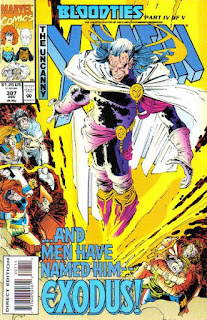 In a Nutshell
Sersi fights Exodus.

Plot
As Beast, Professor X & US Agent fight to protect the mutates from the Magistrate Elite, above them, Sersi battles Exodus. At the UN, Black Widow officially withdraws the Avengers from their charter. Back in Hammer Bay, the X-Men enter the city, as Sersi & Exodus' are blown apart by their fight. Beneath the capital citadel, Quicksilver & Jean Grey search for a way inside, hoping to get to Cortez & Luna. They run into Scarlet Witch & Crystal, after which Cortez appears, using Luna as a human shield, and frightened of retribution at the hands of Exodus. Just then, Exodus blasts into the tunnels, and Cortez shrieks to Crystal & Quicksilver that if they ever want to hold their daughter again, they must destroy Exodus.

Firsts and Other Notables
The Avengers officially withdraw from their UN charter in this issue. On the one hand, this isn't really that big a deal - the whole UN charter came about after the Avengers lost their US government clearance in the wake of Vision trying to take over the world, but it's not something that has come up often or been used to generate a lot of stories. On the other hand, it's the kind of thing that is a significant enough development that it should probably have occurred in an issue of actual Avengers comic. 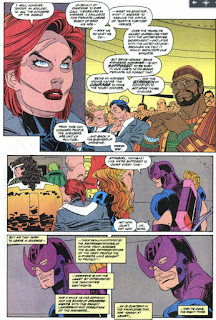 Also, it is Black Widow (the current chairperson of the East Coast branch) who formally withdraws the team. Hawkeye is shown to be looking on approvingly, but the previous chapter seemingly set him up to be the one to cancel the charter, which could have been used as additional justification for the upcoming dissolution of the West Coast Avengers.

Phillip Moreau and Jenny Ransome, who went to Genosha with Xavier but then got left behind when Xavier & Beast were "kidnapped" by the rebel forces in X-Men #26 (which in turn disappeared between that issue and Avengers West Coast #101), are suddenly with Xavier, Beast & US Agent at the mutate concentration camp in this issue. Moreau also realizes Xavier is a mutant, calling him "one of us" (ie a mutant), despite not being a mutant.

Black Knight recognizes Exodus, though he's not sure from where. This establishes a minor dangling mystery that won't be resolved for a few years (eventually, it will be revealed in a Black Knight/Exodus oneshot that also serves as Exodus' origin, that they met during the Crusades when Black Knight was living in the past). 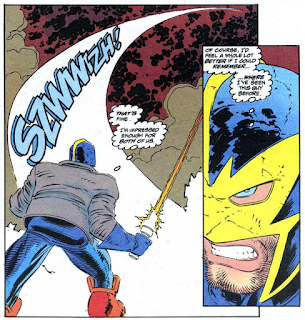 Cortez, speaking of Exodus says he (presumably Magneto), "wouldn't have recruited jim if he suspected...". Another shot in the volley of "vague Exodus mysteries" launched in this crossover, I don't believe anything ever really comes of this (unless it's retroactively meant to be a reference to Exodus ties to Apocalypse, as revealed in that later Black Knight oneshot). 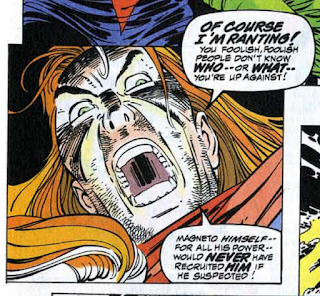 A Work in Progress
Exodus says that he has been sequestered, planning and preparing for his role as mutantkind's messiah. 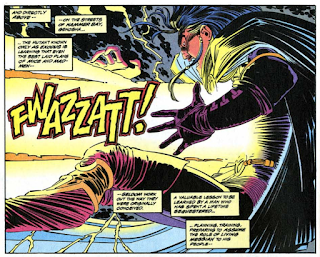 He also says his powers are "beyond psionic". 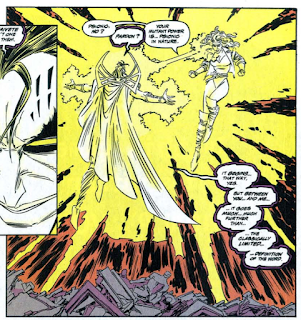 Narration once again refers to Genosha as having once been a "green and pleasant land".

As the X-Men enter Hammer Bay in this issue, Revanche is shown amongst them, despite not appearing on Genosha in the previous two chapters. 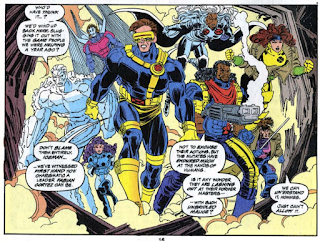 Cortez believes that if Magneto hadn't returned from the dead, he would have won the Upstarts competition. 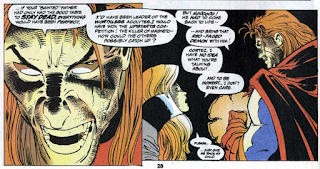 He also calls Exodus a "red-faced devil", another suggestion that Exodus is American-Indian (ultimately, he won't be).

For Sale
Remember Mortal Kombat? Remember K-Mart? Well, the former is at the latter! 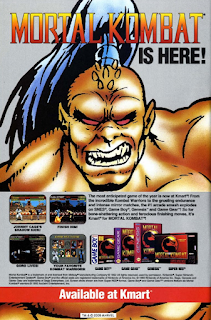 Austin's Analysis
Despite being the penultimate chapter of "Bloodties", this issue is a lot like the previous chapter: there's another centerpiece battle between Exodus and an Avenger (with Sersi tapping in for War Machine) in the skies above the city, another character randomly appearing alongside Xavier & Beast (here, Jenny Ransome & Phillip Moreau are suddenly on hand in the mutate camp, despite not appearing there in the previous chapter), and more curious turns for Cortez (last chapter, "Cortez" turned out to be a shapeshifter posing as him; here, he appear suddenly in the tunnels beneath what is ostensibly his citadel, looking disheveled and desperate for the Avengers to protect him against Exodus, reading very much like we missed an issue in which the character's circumstances changed). Relative to the previous one, this chapter gets a little boost from John Romita Jr., who is very good at depicting the kind of "crackling energy pouring out of two figures" panels that comprise most of the Exodus/Sersi fight, and from the narrative momentum that comes just from leading into the conclusion, but there's no denying this chapter is treading water as the story limps to its conclusion.