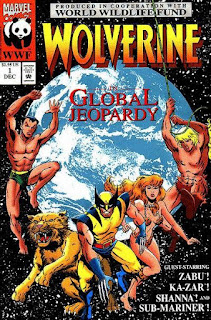 In a Nutshell
Wolverine teams up with Namor, Ka-Zar & Shanna the She-Devil to help endangered animals.

Plot
Wolverine, Namor, Ka-Zar & Shanna the She-Devil all witness endangered animals disappear before their eyes. Independently, they track the missing animals to an island. After a brief fight between Namor & Wolverine, the group is captured by the Conservator, who has turned his island, Castillo, into a safe haven for the endangered species of the world. After being freed by Ka-Zar's sabretooth tiger Zabu and a devilish dinosaur, Shanna convinces the Conservator he could do more to help endangered species by educating people rather than hiding them away on an island. This prompts him to turn Castillo into a wildlife preserve, in the hopes of creating a living, public memorial to the world that had once been, when all animals - two and four-legged - coexisted with nature instead of savaging it.

Firsts and Other Notables
A "very special" PSA-style comic, this issue was produced in conjunction with the World Wildlife Fund as a tribute to Carol Kalish, Sales Manager and VP of Product Development at Marvel, who died in 1991 at the age of 36. Kalish was instrumental in the expansion of the Direct Market, working with fledgling comic shops to help get them off the ground throughout the 80s (including launching a program that helped stores buy cash registers) and impart advice on how to run the shops more efficiently (including emphasizing to retailers the importance of not over-ordering current titles in the hopes of maintaining a large back catalog of books), and was beloved by many retailers at the time of her death (by all accounts, she would probably be fairly ashamed of Marvel's current policies regarding their handling of the direct market).

This issue is written by Peter David, who worked with Kalish in the Sales Department before becoming a writer, and is drawn by Richard Howell, her longtime boyfriend. He worked on a smattering of issues for Marvel in the 80s, probably most notably the twelve issue Vision & Scarlet Witch limited series.

I have no idea why a WWF issue was commissioned as a tribute to Kalish (though "save the rainforest" and ecology-driven stories were all the rage in the early 90s - see also Captain Planet, Fern Gully, Medicine Man, etc. Thankfully, we don't see as many stories as those today because we've solved all those environmental problems from back then, right?); Marvel President Terry Stewart pens a dedication to her in this issue, saying simply that she was a "lover of creatures, large or small... real or fantastical". 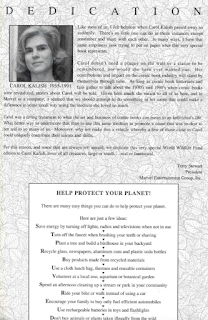 Beneath the dedication are suggestions for readers on what they can do to help the environment (including recycling, using reusable batteries, and volunteering at zoos).

The inside cover details the mission of the WWF. 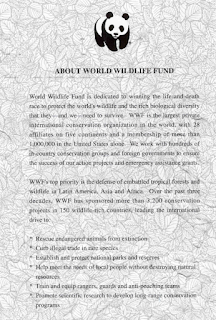 Every right page of the issue features a specific animal or plant, with information about the species alongside a picture. 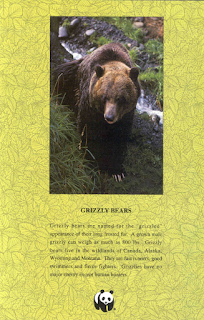 The back cover is dedicated to the importance of the rainforests. 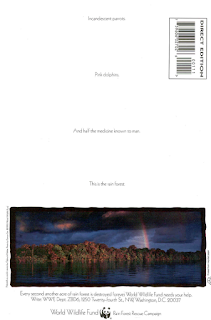 The villain of the story is named the Conservator, who works kind of like a non-cosmic Collector who only cares about endangered animals. I assume this is his only appearance. 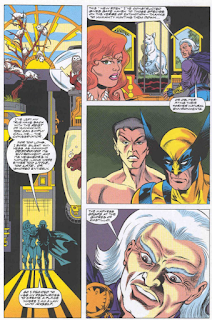 In a cute gag, the heroes are rescued from the Conservator by a dinosaur, described as "devilish", who looks an awful lot like Jack Kirby's Devil Dinosaur character (who appeared in Fallen Angels as well). 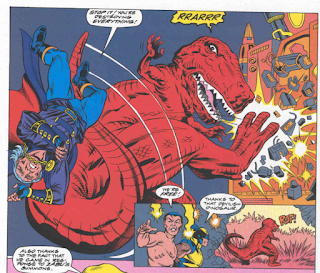 A Work in Progress
Ka-Zar & Shanna are shown to be living in Africa, which seems like a case of David not wanting to confuse any non-traditional comic readers picking this up with concepts like the Savage Land, as I don't think there's any point in the two characters' history in which they're living in Africa.

Shanna notes that Zabu is multi-lingual (apparently he can talk at least to other sabretooth tigers, and dinosuars).

The Reference Section
Early in the issue, Wolverine encounters some campers having their own bad encounter with a bear. The way he tells them what to do reads almost like one of the PSAs that would close out an episode of GI Joe, in which one or more Joes would show up to tell dumb kids how to not be dumb in a particular situation. 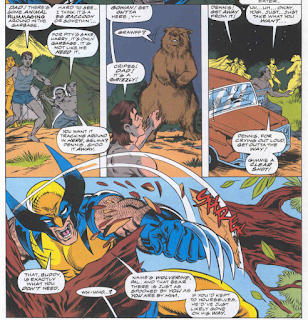 Pun with Peter
As Wolverine & Namor engage in the Obligatory Misunderstanding fight that occurs whenever two Marvel heroes meet in an issue (before sorting out their differences and teaming up against the *real* foe), Shanna points out how obligatory their fight is. 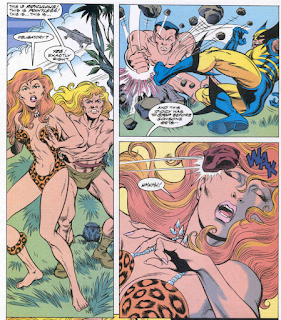 At the end of the issue, the heroes overhear people talking about "shooting" some animals near Ka-Zar and Shanna's home. It turns out they're wildlife photographers, prompting Wolverine to make a quasi-fourth wall breaking "get the picture?" pun to close out the issue. 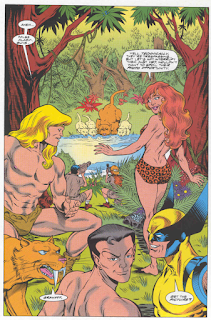 Austin's Analysis
Like Heroes for Hope before it, Global Jeopardy is a public service comic that is considered part of the Marvel Universe canon (it is included in the most recent version of the Marvel Index, which is why I ultimately decided to review it), the kind of thing Doctor Bitz and I discuss regularly on our A Very Special Episode podcast, in which a serial narrative takes a break from chiefly entertaining ints audience to instead inform them about an important issue, usually with minimal subtlety and a deviation from the standard form of the narrative in some way. But whereas Heroes for Hope was an all-star jam issue featuring a plethora of big name creators from both inside and outside the world of comics, this has just Peter David & Richard Howell, who were chosen for very specific reasons. And while Heroes for Hope was part of a larger pop culture effort to help out victims of the African famine, the impetus behind this issue is to raise money for the WWF as a way to honor a beloved figure inside the industry who passed away suddenly.

The smaller scale and personal focus of this works to its advantage, as does its relative brevity (with every right page dedicated to animal facts, the story is fairly short). As far as special PSA comics go, this could be much worse. All of the characters involved make sense given the subject matter (Wolverine is of course the big draw, but he has enough of a history of communing with nature to justify his presence outside his popularity), the villain is defeated through reason, not punching, and the issue is discussed with only a modicum of preaching. While by no means is this a masterpiece (or even anything I would ever feel compelled to read again), it gets in, tells its story in a brisk, straightforward manner, tosses in a couple of amusing bits, and then gets out without overstaying it welcome. Plenty of other PSA stories could do well to follow its example.