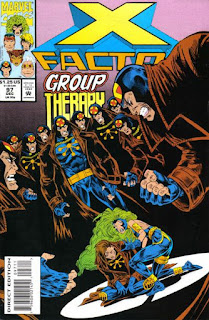 In a Nutshell
X-Factor becomes embroiled with Haven's movement.

Plot
Lorna find herself transported to a pocket dimension by Haven. The pair briefly discuss Haven's "New Humanity" philosophy before Haven sends Lorna back to DC. In upstate New York, Random returns home, unaware his house is being monitored. Lorna confers with Professor X about Haven, and he asks her to look into the woman for him. Afterwards, Lorna discovers an increasingly morose Madrox, his personality splintered such that each dupe is manifesting a different trait. In Albany, Random is attacked by the troops outside his house, but defeats them all. The next night, X-Factor, sans Forge & Havok, attend a seminar being held by Haven. As she launches into her "New Humanity" speech, however, she's interrupted by a plasma blast, as Havok & Forge burst into the room, declaring that Haven is under arrest.

Firsts and Other Notables
Though she technically made her first appearance in the previous issue, this one presents a more detailed picture of Haven, establishing her as a sort of New Age self-help guru with a growing national following, who also occasionally dons armor somewhat reminiscent of Lilandra's silver Shi'ar armor and has superhuman powers (here, we see her teleport Polaris to and from a "pocket dimension). Later, it will be revealed that Haven herself is not a mutant, but rather, is carrying an unborn fetus which is itself a mutant with a variety of abilities (including healing and telepathic abilities) that acts through Haven.

Haven's schtick is the idea of a "New Humanity", introduced here, which basically posits a path to the future for man and mutant that is different than the ones laid out by Xavier and Magneto, which will result in the creation of a new race comprised of both humans and mutants. 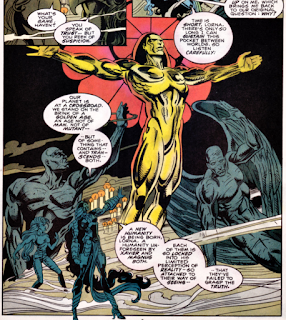 After realizing last issue he may have contracted the Legacy Virus in Genosha, Polaris confronts an increasingly-sick and despondent Madrox in this issue, and the connection between his illness and the one that killed Illyana is made explicit for the first time. 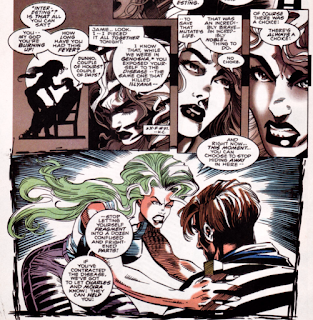 She also notes that his dupes have started reflecting specific aspects of his personality (so one is all-in on Haven, while another is deeply suspicious and pessimistic about everything, while another is mostly Id-driven, etc.). It's presented here as an aberration, something caused by his illness and a lack of control, but Peter David will later develop this as an intentional facet of his power, and use it to good effect, when he returns to the character in the 00s. 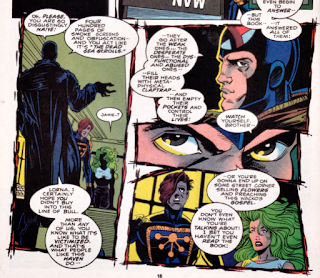 The corner cover box is back to featuring the entire team this issue (after featuring an image of a different solo character in the previous handful of issues), and for the first time since the "All New, All Different" relaunch, it's a traditional cover box, in that it depicts the team via a group of floating heads (rather than a group shot).

This issue continues to develop Random as an actual character and not just a one-off joke poking fun at 90s access. It's established that his real name is Marshall Evan Stone III, and that he doesn't like being called that. 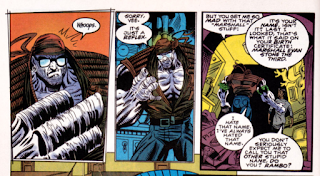 We also meet Vera (whom he called in issue #95 while battling Polaris), and while their relationship seems to be that of romantic partners, it's never explicitly stated, and reads at times like a mother/son relationship (which, intentional or not, sort of fits with the later revelation that Random is significantly younger and his 90s parody form is one he adopts to make himself seem older and tougher. 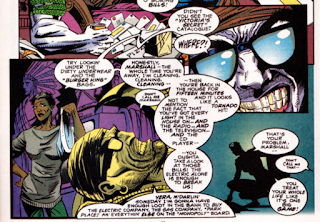 Creator Central
Jan Duursema is listed as the guest penciler, though she is technically the series' next regular artist. But there will be a few more issues before she officially works in that capacity.

A Work in Progress
Haven makes a reference to all the times Polaris has been "used and abused", name-dropping Mesmero and Malice (but not Erik the Red, who also kept her brainwashed for a prolonged period of time). 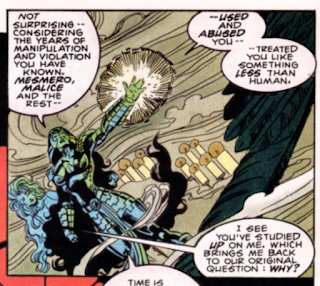 Val remains ostracized from X-Factor as a result of the events of issue #92 and her role in the creation of the Project: Wideawake Sentinels, but is still working for the government, and is seen in this issue investigating Haven (which leads her into contact with most of X-Factor for the first time since issue #92). 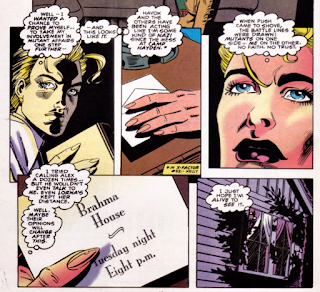 Madrox Prime references his killing of Mellencamp in issue #92, though the footnote quibbles with his characterization of it as murder. 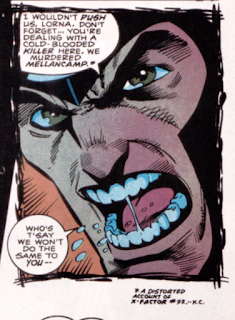 It's in the Mail
An editorial in the letters column details the various artists working on upcoming issues, and promises that after all that, the series will finally be back on schedule; such editorials appeared in far too many series' letters pages around this time. 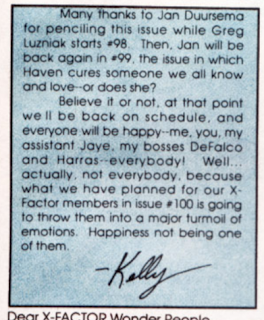 Austin's Analysis
With this issue, DeMatteis really starts to put his stamp on the series. There's a continued focus on characterization (and as with other recent previous issues, there is a lack of big action scenes here), from the continued devolution of Madrox' mental & physical state to Lorna grappling with whether or not Haven is on the level. Even Random, a character who DeMatteis apparently has taken a shine, gets some development here, as we see him interacting with Vera, which gives a sense of who he is when he's not out bounty hunting. And Haven, introduced in the previous issue but fully presented here, is a classic DeMatteis character, combining his penchant for pop psychology & mysticism. Her whole "alternate path to Xavier & Magneto" schtick isn't terribly original, but somewhat more relevant at this point in time, coming so soon after the latest significant flare-up in the ongoing Xavier/Magneto conflagration, and her role as a public figure/best-selling author makes her a suitable antagonist for this series. Once again, though certainly darker and less sitcom-y than under Peter David, DeMatteis continues to write the series in a way that mostly fits what's come before, even as he continues to develop the characters.