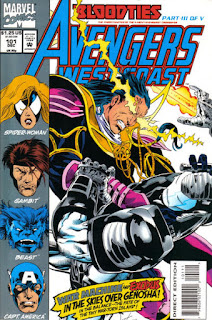 In a Nutshell
War Machine battles Exodus in the skies over Genosha.

Plot
As the Avengers confront the United Nations over the terms of their charter, the contingent of the team that journeyed to Genosha are confronted by Exodus. War Machine engages him as the Scarlet Witch & Crystal head off to find Luna and the rest of the Avengers try to stop the fighting between the mutates and humans. Elsewhere, Professor X, Beast & US Agent discover a mutate concentration camp in the tunnels beneath the city, protected by the Magistrate Elite. On the outskirts of the city, the X-Men defeat the Unforgiven, while in the skies above the city, Exodus overpowers War Machine, only to find Sersi ready to go one-on-one with him.

Firsts and Other Notables
This is the penultimate issue of Avengers West Coast, which is cancelled as of its next issue and (eventually) replaced with Force Works, arguably the most 90s comics of the 90s (it tries to be X-Force Avengers, fails, then pretty much just becomes Avengers West Coast with a different name). If you think dedicating the second-to-last issue of a long running series to the third chapter of crossover seems like a dick move respective to the book's readers (and very, very 90s), well, you're not wrong.

This is also Roy Thomas' last issue of the series, as the incoming Force Works writers handle the sendoff next issue. Apparently, Thomas was poorly informed about all the circumstances regrading his departure and the transistion to the new book, as evidenced mostly by the presence of Hawkeye in this issue. The previous issue saw the death of Hawkeye's wife, Mockingbird, and next issue, his absence will be noted and attributed to that event (and used as part of the trumped up evidence justifying the dissolution of the West Coast team). Here, Hawkeye is seen leading the charge against the UN's control over the Avengers, and it seems like Thomas is setting up Hawkeye to be the one who dissolves the Avengers' charter (thus giving more justification for breaking up the team), but it will ultimately be Black Widow (of the East Coast branch) who removes the Avengers from the charter (in the story's next chapter, not written by Thomas). 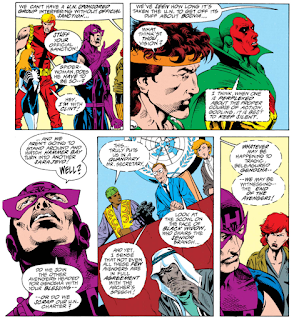 The centerpiece of this issue is a fight between Exodus and War Machine, and at one point, Exodus is able to use the fact that War Machine is African-American to race-bait him into attacking. This will, rather dumbly, also be used as justification for shutting the Avengers West Coast next issue.

The cover to this issue features one of those retro layouts with headshots of characters involved in the story framing the central image.

Creator Central
Scott Lobdell (but not Nicieza) gets a "special thanks" credit in this issue.

A Work in Progress
Professor X, Beast & US Agent discover a mutate concentration camp in Hammer Bay's sewers in this issue. 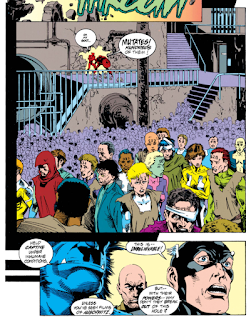 The mutates, despite their powers, are being guarded by the Magistrate Elite, on orders from President Cortez, introducing a new faction into the story. 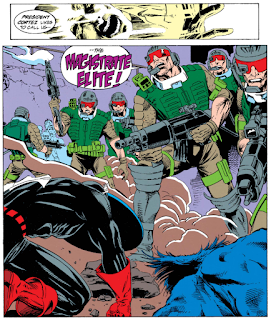 The Cortez who confronted the X-Men in X-Men #26 is revealed here to be a shapeshifting mutate, albeit one psychically-linked to Cortez (so he still learned that Magneto is incapacitated). 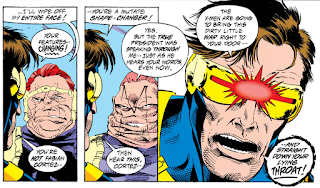 Exodus is said to have "boundless psionic powers", which mostly manifests itself as "flying and shooting energy blasts from his eyes and hands". 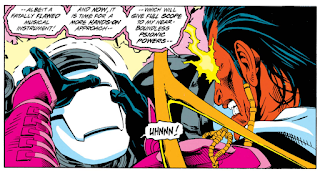 Young Love
Rogue and Gambit flirt some more while battling the Unforgiven. 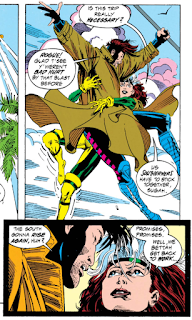 Human/Mutant Relations
Beast is uncharacteristically "mutants only!" about US Agent tagging along with him and Xavier. 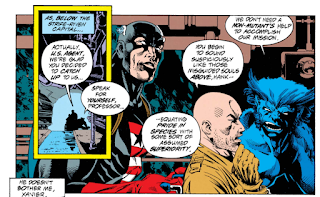 Austin's Analysis
The third part of "Bloodties" is essentially an issue-long fight between Exodus and the Avengers (chiefly War Machine), and the X-Men & the Unforgiven, which, after two issues of mostly setup, is fine. But it's also indicative of the larger problem with the story, which is that, now over halfway over, very little has still actually happened. A bunch of different people have come to Genosha, and now some of them are fighting. That's about it.

This is also the chapter where the seams are starting to show, in which the handoff between writers is a little less elegant. Hawkeye's presence is curious (caused by behind-the-scenes editorial decisions), given events in this series before and after this issue. We see that US Agent has caught up to Beast & Xavier between issues (which is fine), but the trio has also lost Rene Majcomb and the bipartisan rebel force along the way (huh?). Beast is suddenly scripted as being oddly and suddenly racist (he may not know or like US Agent much, but he is the one member of the X-Men to actually have been an Avenger; all other reasons aside, that makes him a curious choice to voice a "mutants only!" perspective), and then the three end up stumbling across a mutate concentration camp being run by human magistrates empowered by Cortez (okay...), which is something that gets tossed off without much follow-up (it's unclear if this is an attempt by Cortez to simply prolong the conflict and play both sides, or an attempt to contain the Legacy Virus plague, or something else entirely). As an individual chapter of the story, this is (mostly) fine, albeit also mostly action-oriented. But it does little to advance the overall story, while doing much to muddle it, and thus, marks an unfortunate turning point for the crossover.