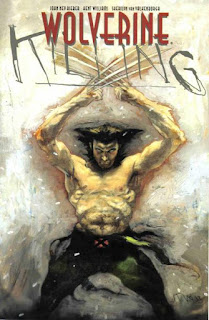 In a Nutshell
Wolverine fights a secret society in Tibet.

Plot
Motivated by unsettling dreams, Wolverine goes to Tibet. However, his dreams have been motivated by a secret society, whose matriarch wants Wolverine to impregnate her daughter Serra so his healing abilities will be added to their bloodline. Wolverine fights some Chinese soldiers and then members of the secret society, befriending Serra along the way while also struggling with his inner beast, before ultimately holding the beast in check and deciding not to kill Serra's mother's enforcer after defeating him. Wolverine then leaves Serra a farewell note, and departs.

Firsts and Other Notables
This is another prestige format one-shot, featuring a square-binding but regular comic book pages (instead of high gloss pages) and running $5.95. It's hard to say if this or Inner Fury was intended to be the "annual" for Wolverine in 1993, or if Marvel was even caring about such things in 1993.

The fully painted art comes from Kent Williams, the same artist who painted Meltdown, the Havok/Wolverine team-up limited series, along with Jon J. Muth. It is written by John Ney Rieber, in his first Marvel work (and some of the earliest work of his career). Rieber will later launch the awkward Marvel Knights Captain America series in the early 00s, but is chiefly known for his work at DC's Vertigo imprint, particularly the Harry Potter-esque Books of Magic, launching the ongoing series after Neil Gaiman wrote the initial limited series. 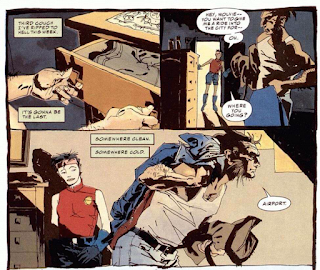 All the other characters in this issue are appearing for the first, and to date, only times.

The Chronology Corner
Obviously, this takes place before Wolverine lost his adamantium, specifically after Wolverine #74, and before X-Men #24 and Uncanny X-Men #304 (which is a gap into which a bunch of post-"Fatal Attractions" stories that still feature Wolverine with metal claws fall).

A Work in Progress
Wolverine apparently knows Mandarin, but not Tibetan.

The Best There is at What He Does
At one point Wolverine declares that the thing he's best at is living. 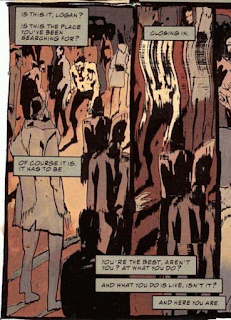 Austin's Analysis
The problem with the seemingly-unending stream of Wolverine one-shots isn't just their volume or level of quality, it's the fact that they're all, essentially, the same. The art is usually from a more avant garde artist, someone who doesn't usually work in comics (or is showcasing a different style from their usual one), and as a result, the storytelling often suffers. There's always first-person narration featuring the pseudo-noir, Miller-esque tough guy voice that was refreshing in 1982. Rarely, if at all, do any pre-existing characters other than Wolverine appear, or factor into the story in any significant way. Instead, there's usually a handful of brand new characters, consisting of at least one villain and one femme fatale-ish love interest, none of which will ever be seen or heard from again. Often, the setting is somewhat unique for Wolverine (like Tibet here), and the plot is completely divorced from any happenings in Wolverine's main series or the X-universe as a whole. And, invariably, the climax usually involves Wolverine struggling with, but ultimately prevailing over, his inner beast (the impact of which being lessened by the frequency of such struggles, and their relative isolation in all these one-shots).

The end result is that the appreciation of any given issue is down essentially just to the art (if you like the particular artist, great, if you don't, there's not much else to enjoy) and how much it deviates from any of the usual story points (at this point, I'd kill for one of those one-shots to not exist in a complete narrative vacuum). The Kent Williams art here does nothing (positive) for me, as it is (at least to my mostly untrained eyes) a lot of gibberish that seems unconcerned with telling any kind of story, which makes even figuring out that the story being told is generic and cliche harder than it should be. And being that the story is completely cutoff from anything happening to Wolverine elsewhere in the X-universe, and features in no notable way any characters that will ever appear again aside from Wolverine, well, let's just say I'm glad I didn't pay $5.95 back in the day for what is ultimately a boring story told badly.