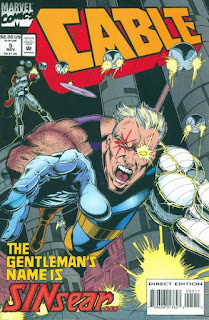 In a Nutshell
Cable fights Sinsear

Plot
Sinsear reflects on how he came to be, then locates Cable, who is at X-Force's base working to bring Professor online. Before he can finish, Sinsear teleports him to his base of operations, where he declares he's going to kill Cable slowly, just as Cable did to him. The pair fight, and Cable is able to prevail through a combination of his own mutant abilities and turning Sinsear's various weapons against him. As a defeated Sinsear teleports away, he leaves Cable with the information that Tolliver is the time traveler Sinsear was sent back in time to kill, prompting Cable to reason that Tolliver must still be alive, which in turns causes him to wonder who Tolliver was to begin with.

Firsts and Other Notables
Cable as a series suffered from publishing delays before the first issue was even released, and they got so bad that Marvel had to stop even pretending issues were being published monthly, with the previous issue of the series cover-dated August of 1993 (and on sale in June), while this issue is dated October of '93 and was on sale in September, three months after issue #4.

One thing I failed to mention previously (that I realized while I was researching all the publication date stuff), is that this series had a regular cover price of $2.00 - seventy-five cents more than the "standard" price for a Marvel Comic at the time ($1.25), and a quarter more than even the "deluxe" Excalibur and Wolverine (which were originally priced higher than the other X-books because they didn't feature ads and had additional art on the inside and/or back covers, two things which eventually went away even while the price difference didn't). Given that, at this point in time, this series is the most inconsistent of the X-books in terms of art and doesn't really have much of a direction story-wise, while also suffering from massive shipping delays (which, of course, was the case with plenty of other X-books), it's kind of funny (in a sad way) that it is also the most expensive regular X-book (not that any of that stopped me from buying it back in the day, but I do recall being vaguely annoyed it was perpetually more expensive than even Wolverine & Excalibur, which I had only recently started buying).

This marks the final appearance of Sinsear until issue #41 (which will kill off the character), but that won't stop him from getting a trading card in the next set of X-Men trading cards, and before he goes, we get a brief origin for the character (he was a solider on the other side of the war Cable fought in the future, whom Cable injured during a battle but left alive out of mercy (so he could be patched up by the other side). Sinsear hates him for not just killing him, because he ended up getting turned into cyborg and losing his humanity). 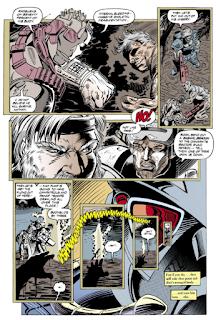 As he retreats, Sinsear leaves Cable with the information that Tolliver is a time traveler (the one Sinsear was initially sent back in time to eliminate), which throws Cable for a loop and sets up the story beginning next issue, which will answer once and for all the questions surrounding Cable, Stryfe, Cyclops and Tolliver. 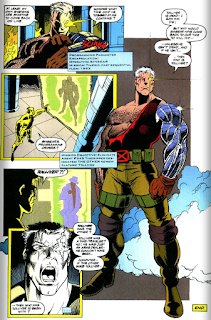 That story gets its own full page preview at the end of the issue, doing that annoying "faded negative image" trick the X-Men & Avengers 30th anniversary ads used. 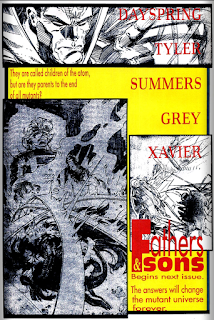 The Chronology Corner
Cable, Cannonball & Siryn appear here between issues #28 and #29 of X-Force.

A Work in Progress
In a flashback to Sinsear's origin, featuring Cable as a younger solider in the future, he is seen wearing a visor not unlike Cyclop's. 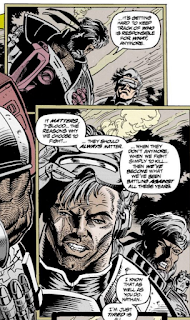 Still working to repair his relationship with X-Force, Cable can't promise Cannonball & Siryn he won't still have things he needs to take care of himself that he won't be able to talk about, but promises to stay in touch when he does go off on his own. 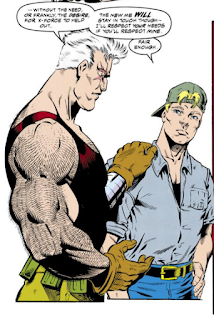 Cable reminds Sinsear that he has mutant powers, which he describes as "low grade telekinesis". 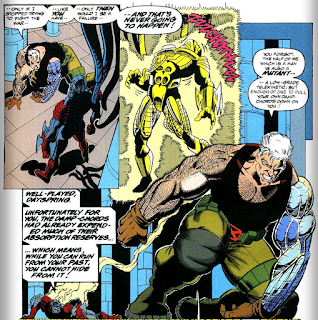 Austin's Analysis
Cable's battle with Sinsear (and that character's subsequent disappearance at the end of their fight) essentially marks the end of the first, brief, phase of this series, concluding the series' initial plot that was really just an excuse to get Cable back into the "main" timeline in the first place. The ending of this issue sets up the next story arc, which deals with settling the various questions surrounding Tolliver, Cable, Stryfe and Cyclops once and for all, after which the series will feature a handful of more traditional "solo character" stories as it continues to search for some kind of narrative and artistic identity. Essentially an issue-long fight, this issue works well enough (the art from Nicieza's New Warriors collaborator is probably the best the series has had yet, even while it's still a little shakier than Robertson's usual work), but it's also hard to be too invested in it, considering Sinsear makes all of one more appearance after this and was never much more than a walking plot device to begin with. He served his purpose in getting Cable back to the present and setting up the upcoming revelations & confirmations, but it feels like Nicieza probably could have found a way to get to the same place with this series faster and in a more engaging way.