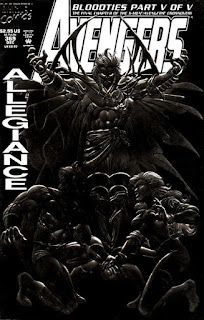 In a Nutshell
The X-Men & Avengers unite to stop Exodus & save Genosha.

Plot
Exodus attacks Cortez, seemingly killing him and taking Luna for himself. On the streets above, the X-Men & Avengers unite as the skies turn yellow and outside communications are jammed, actions attributed to Exodus. As Storm & War Machine investigate the barrier and confirm it is psionic in nature, Professor X telepathically contacts the two teams, who send a contingent to aid him, Beast & US Agent against the Magistrate Elite and liberate the mutate concentration camp. Just then, Exodus appears, with Crystal, Quicksilver, Scarlet Witch & Jean Grey in his thrall, and orders the mutates of Genosha to slaughter all humans, or else his barrier surrounding the island will contract, killing everyone. Recognizing that Exodus is telepathically fanning the mutates' fervor, the two teams split, with one group holding off the mutates while another attacks Exodus as Xavier probes his defenses. Sensing that the's stretched too thin, Xavier telepathically blasts Exodus, allowing Black Knight to get in close enough to shut him down with his plasma sword. The barrier disappears and the mutates back down, but Exodus recovers enough to escape, blasting Quicksilver on his way. Black Knight revives him with CPR, and days later, as the country begins to rebuild, Xavier ponders whether keeping his identity as a mutant a secret has done more harm than good.

Firsts and Other Notables
Exodus attacks Cortez again, and unlike Uncanny #304, he is clearly meant to have killed him. While Cortez will turn up alive again (in 1996's Magneto limited series, the one where Magneto is Joseph), this pretty much marks the end of his brief tenure as a regular, significant villain. 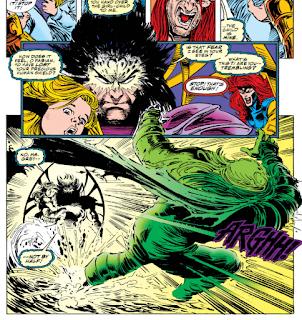 The Concentration Camp of Magical Appearances lives up to its name again, as in this issue, both Renee Majcomb (leader of the bipartisan rebel forces) and Henry Peter Gyrich (whom Beast & Xavier explicitly left behind in X-Men #26) are on hand, fighting alongside Beast, Xavier & US Agent like they've been there the entire time. 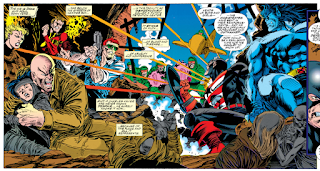 Similarly, Xavier suddenly appears in his regular Shi'ar hoverchair (or something close to it) at one point this issue, despite having been shown in a regular wheelchair in X-Men #26. 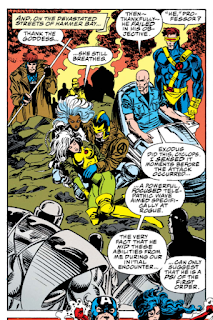 For whatever reason, this issue more than any other sticks in my mind as the one which highlights Revanche's utter superfluousness, as she appears in the backgrounds of group shots in a couple of panels, then gets knocked unsconsious in her one action shot. She is a character who pretty much does nothing of note outside of the story that introduces her, the one in which she reveals she has the Legacy Virus, and the one in which she dies, and this issue is the epitome of that for me. 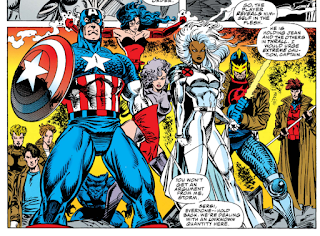 In the end, it is Black Knight who strikes the finishing blow against Exodus, which may seem strange given the number of characters with a more personal connection to Magneto and/or Luna on hand, but its perfectly in keeping with Harras' Avengers run, in which Black Knight is clearly the central character. 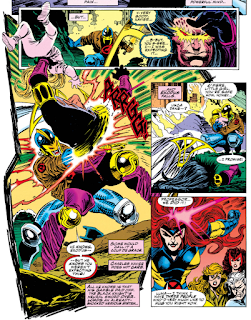 Similarly, he is the one who revives Quicksilver following Exodus' parting shot (despite their being tons of other superheroes on hand that probably also know CPR), because it ties in with the whole Black Knight/Crystal/Sersi/Quicksilver love...rectangle (?) that has been central to Avengers of late, as well as the larger Gatherers plotline (in that it highlights the difference between Black Knight and Proctor, the Gatherers' leader and an alternate version of Black Knight, who made a different choice when faced with a romantic rival).

This issue is double-sized and has a foil-embossed "platinum" cover, the fourth and final enhanced cover and double-sized issue meant to celebrate the Avengers 30th anniversary, following the "bronze" cover to issue #360, the "silver" #363, and "gold" #366.

Creator Central
Like most everything else around this time, this issue shipped several weeks late, and upcoming X-Factor artist Jan Duursema pitches in to help regular penciler Steve Epting on the issue.

A Work in Progress
Cortez reiterates again that Magneto was a fool to awaken Exodus. 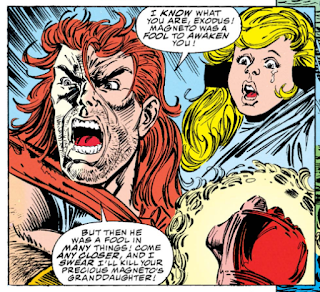 It's noted that the last time the X-Men and Avengers met, they were fighting over Magneto's rights, a reference to the X-Men vs. the Avengers limited series which overlooks at the very least Avengers #350, when Cyclops & Professor X briefed the Avengers about the threat of the Acolytes (though I suppose technically, both teams didn't meet in full in that issue). 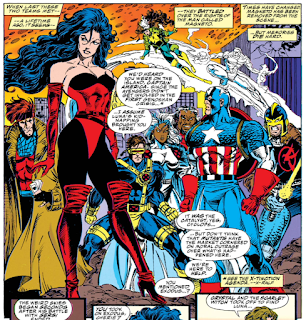 Black Knight once again sort of recognizes Exodus from somewhere. 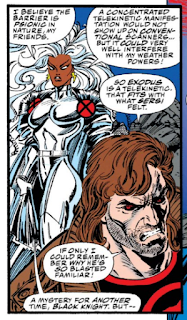 There's a somewhat random bit where Iceman, after Cyclops assign him to the group of X-Men/Avengers staying behind to help evacuate a hospital, bemoans the way Cyclops continues to treat him like a kid. It kind of comes out of nowhere, and while it maybe ties in with the ongoing "Iceman realizing his full potential", it doesn't get brought up again later in the issue.

Xavier says the Magistrate reinforcements at the camp have better psi-shields, a convenient explanation for why he's not just mind-blasting them all into submission. 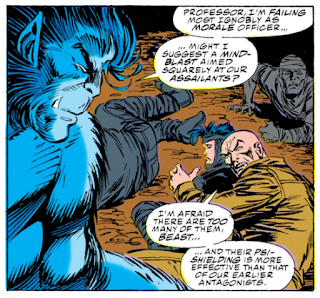 Rogue notes that the last time she was in Genosha, the Magistrates didn't treat her too kindly, which is...something of an understatement.

It's confirmed here that Exodus' psionic powers include both telepathy and telekinesis.

The Unforgiven pop up in one panel, having somewhat hilariously switched their allegiance from Cortez to Exodus between issues. 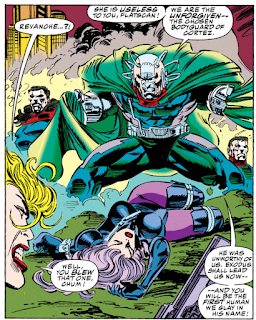 Human/Mutant Relations
The issue closes with Xavier musing to Captain America and Renee Majcomb whether it would be in mutants' best interests if he revealed himself as one, or if he does more good for them by posing as a human advocate for mutants (as he's always believed). 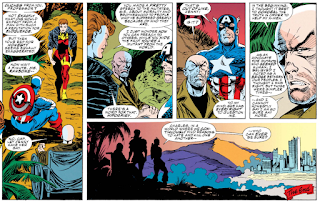 Austin's Analysis
"Bloodties" comes to a close with an issue that is of a piece with what came before: mostly fine, suffering coordination issues (even more characters magically appear alongside Xavier at the concentration camp here), and featuring a variety of characters fighting Exodus while he shoots generic blasts of energy. This issue also earns points for actually featuring the Avengers/X-Men team-up the entire crossover has been promising.

But it is kind of amazing to step back and see how far afield the ending is from the beginning, in a story that is just five chapters long. What started with Fabian Cortez triggering an international crisis for various...reasons loosely connected to Magneto's legacy, ends with Exodus trying to crush the country with a telekinetic forcefield. The narrative whiplah isn't helped by the fact that two of the five chapters (Avengers West Coast #101 and Uncanny X-Men #307) are essentially place-holder chapters devoted to Exodus fighting a pair of Avengers, which didn't leave a lot of room for plot or character development. Ultimately, this is a mostly-flawed crossover, suffering from plot inconsistencies chapter to chapter, with characters appearing & disappearing at random, motivations changing between issues, etc. (all else aside, the one thing a crossover kind of needs to do to succeed on at least the most basic level is stick the landing as far as passing the story from one issue to another). It's also pretty blatantly an X-Men story that happens to guest star some Avengers, rather than a truly shared story with equal impact for both teams (the whole "pull out of the UN charter" subplot seems like an attempt to make this story more Avengers-relevant, but it's really an afterthought, in-story and in terms of future ramifications).

Still, for all its warts, I have a lot of affection for this story. After the X-Men, the Avengers were the next thing I branched out into as I got deeper into comics (in large part because of their shared anniversary, which put the franchise on my radar back in the day and made them seem like a logical extension from the X-books), so a crossover between the two groups seemed tailor-made for my tastes at a time when I wasn't yet reading much else. While objectively it's clear that Exodus more or less takes over this story to its detriment, at the time, he was the kewl new villain on the block, and I ate up everything he did with a spoon. I was dazzled enough by the big fights and grave intoning about Magneto's legacy to not really notice the chapter-to-chapter inconsistencies, and if the story was ultimately a little X-heavy, well, that certainly didn't bother me. Quite simply, most of the story's problems weren't readily apparent to me as a kid, when my critical reading skills were still developing. When I read it now, I can still remember how much I enjoyed it back then. But nowadays, it's also difficult to defend it on any objective merits.

Next Issue
Tomorrow, the truth behind Tolliver is revealed in Cable #6. Next week, Infectia returns & Thenody returns in X-Men #27.