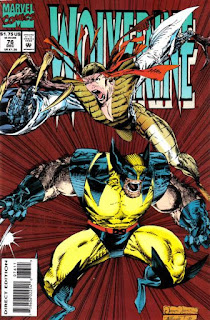 In a Nutshell
Wolverine heads to Canada, trailed by Lady Deathstrike.

Plot
Riding his motorcycle into Canada, Wolverine crashes, killing a rabbit and injuring a fox that ran into the road. He is found by a group of bikers, and mistaking their concern for a threat, he pops his bone claws, which causes him to pass out from the pain. In Manhattan, Ronald Parvenue tells Lady Deathstrike that his sources have alerted him to Wolverine crossing the border into Canada, and they depart to track him down. Later, the bikers show up at Heather Hudson's house with the unconscious Wolverine, having found her address in his wallet. Wolverine dreams of Magneto's attack, then wakes up, having been unconscious for two days. Lady Deathstrike tracks down the bikers who helped Wolverine, learning his whereabouts.  Wolverine asks Heather to hack into Canada's government databases for information on the Weapon X project. As they search, Puck bursts into the house, alerting them to a suspicious limo outside. Just then, Lady Deathstrike crashes through the window.

Firsts and Other Notables
Via a paper authored by Monica Hines (who is considered to be Carol Hines of the Weapon X project using a different name) found amongst some Weapon X files, the idea that Wolverine's healing factor needs adamantium to perform at the supercharged levels he's used to is introduced; the relationship between Wolverine's healing factor and his adamantium is something Hama will explore over the next dozen or so issues, ultimately settling on the notion that without having to compensate for the adamantium, the healing factor will ultimately end up being even more efficient moving forward. 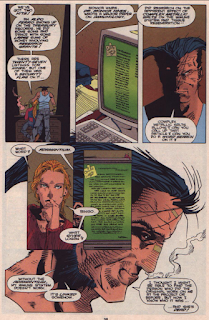 Lady Deathstrike is the first villain Wolverine faces post-adamantium, as she's alerted to Wolverine crossing into Canada by Ronald Parvenue, the businessman who brought the Hunter in Darkness to New York and teamed-up with Lady Deathstrike in issues #45-46. 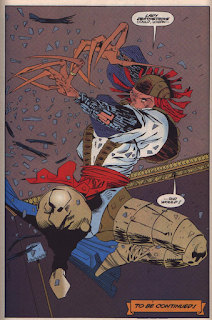 Both Heather Hudson & Puck of Alpha Flight appear in this story as well. Puck's first appearance in the issue is somewhat abrupt, as he suddenly shows up in full costume without explanation like he's been around the whole time. 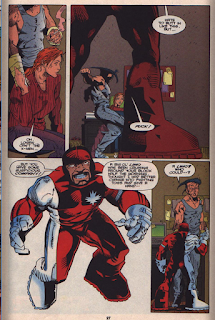 One issue after taking over as the series' new regular artist, Adam Kubert is spelled here, with Tom Coker filling on pencils (granted, last issue was double-sized, but still).

A Work in Progress
Wolverine notes that along with everything else, his sniffer isn't what it used to be. 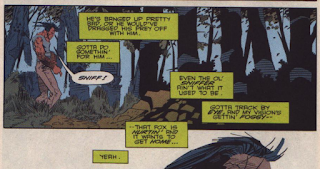 The depiction of his bone claws in this issue is particularly gruesome. 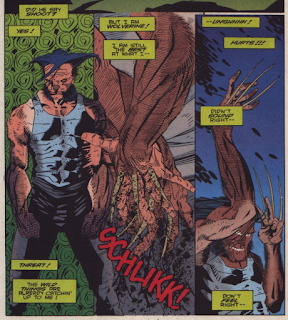 While unconscious, Wolverine dreams of Mariko, Magneto ripping out his adamantium, and being jumped and taken to the Weapon X project, as seen in "Weapon X". 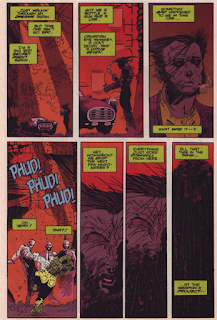 The Best There is at What He Does
The name on Wolverine's passport is apparently Logan W. Logan, which is pretty hilarious. 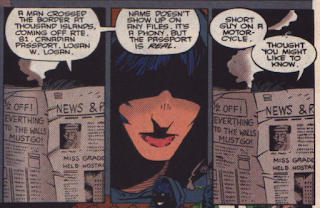 He notes that not long ago he was able to watch as cuts would scab over and heal in moments, but his healing factor is no longer capable of handling injuries that quickly anymore. 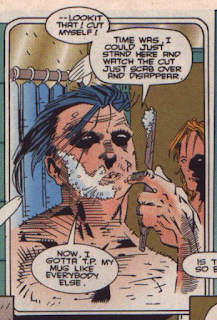 Austin's Analysis
Following a change to a character's status quo as dramatic as the one Wolverine experienced in the previous issue, readers are going to want to see two things: for the character to not immediately be acting like something signiciant didn't just happen to them, and for that character to get put into familiar situations that are now different as a result of the change. To his credit, Hama does both of these things right off the bat, showing a Wolverine whose healing factor is still so overtaxed that merely popping his bone claws after crashing his bike is enough to overwhelm it, while at the same time, bringing him to a familiar setting (Canada) and familiar people (Heather Hudson) who can react to the recent changes, while setting up a confrontation with a classic member of his Rogues Gallery.

In fact, making Lady Deathstrike the first villain Wolverine encounters post-adamantium is particularly smart on Hama's part, as so much of her animosity towards Wolverine is tied up with his adamantium (as her father developed the process for bonding the metal to bones so she feels Wolverine is usurping her legacy), as is his inclusion of Heather Hudson, who, along with her husband, was the first person Wolverine encountered after escaping from the Weapon X project with his adamantium bones; now, she's the first person from his past he encounters after losing them. Much of the next dozen or so issues will be dedicated to Wolverine grappling with the loss of his adamantium and how it effects his interactions with old foes, and Hama kicks that off strongly here.