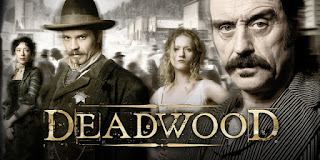 Deadwood was never a media darling in the same vein as The Sopranos, but its debut season did have respectable ratings, and with HBO eager to maintain its reputation as the place for literate, adult dramas, the series was able to enjoy a boost in its budget for the second season.  The money is clearly put on the screen, as the sets grow more elaborate, the thoroughfare becomes increasingly crowded with extras, and the number of featured players multiplies.


The (Ever Expanding) Call Sheet
The three official leads of the show remain Timothy Oliphant, Ian McShane, and Powers Boothe, but a number of guest stars from Season One have now been promoted to featured player status, meaning that nearly every second of the opening credits is packed with names of actors, all playing some role in the increasingly complex community of Deadwood.  And that’s to say nothing of the extras that are also being plucked from the background and transformed into recurring characters.  This year, for example, an extra hired to play one of Al Swearingen’s prostitutes, actress Jennifer Lutheran, emerges from the crowd and begins what seems to be an extremely minor romantic subplot with Johnny, the most slow-witted of Al’s lackeys.  Their relationship will become a key factor in next season’s finale, which turned out to be the farewell to the series.  (And just as Milch allowed an extra named Richardson to keep his real name after his character was officially christened, so does Jennifer Lutheran play someone simply named Jen.)

This is one of Deadwood’s greatest strengths, the sense that the stories aren’t being conceived as conventional TV dramas, with one or two stars who have to be given a certain number of scenes each episode, or bit players often there to star in tedious B-plots that give the real stars an opportunity to take a break during filming.  In Deadwood, literally anyone might step up from the crowd and be granted their own special moment, or at the very least, influence a major event in the community. 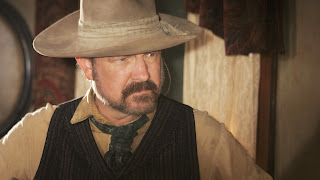 Probably the best example of a minor player in Season One becoming a fully realized character in Season Two would be actor Jim Beaver’s evolution as Whitney Ellsworth, the enthusiastic owner of a “workin’ gold claim” in Season One who becomes a pure hearted, yet still crude, representation of a simple man with the decency to reach out and ease someone’s pain.  His willingness to marry Alma Garrett, not only to deny her the societal embarrassment that would accompany having a child out of wedlock (with the camp’s sheriff, no less), but also to provide the camp’s orphan Sophia with a real father is truly touching, and the wedding of Ellsworth and Alma serves as the symbolic backdrop for the season finale’s multi-tiered resolution of various plot threads.  It’s a marriage of convenience, one of the many “lies agreed upon” this year, but it’s also moving in a way, an opportunity for the collection of free spirits, all motivated by greed, to come together and celebrate a union of two selfless individuals.

The increasingly swollen cast also signifies one of the reasons Deadwood couldn’t truly connect with a mainstream audience -- viewers aren’t used to keeping track of so many characters.  The nearest example would be soap operas during the heyday of the daytime drama, but those shows had the benefit of five hours a week to fill.  Deadwood is only twelve episodes a year, and in addition to the numerous character arcs, the show is also deeply invested in the political wrangling that’s required to turn this outlaw colony into an official part of America.  This would demand an attentive viewership under the best of circumstances, even if the actors weren’t also speaking in Shakespearean riddles.  Later, even diehard fans of the show began to question Milch’s sanity, as the cast of Season Three started to bloat seemingly out of control. 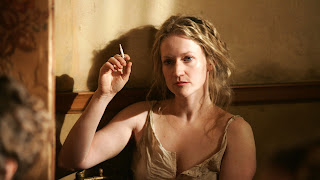 “The Whores Can Come”
Airing in the era in-between lengthy think pieces devoted to entertainment product, and said think-pieces turning into moralistic lectures and social crusades, Deadwood’s blunt portrayal of sex workers in this era went largely unnoticed in the previous decade.  Often, the way Al and Cy treat their stable of prostitutes (usually referred to as “whores” at best, another term at worst), is played for laughs, with this season presenting, among other memorable moments, Cy’s grand sales pitch for just how to market Chinese prostitutes to xenophobic prospectors.  The humor is balanced by an increasing willingness to not only give more of the working women opportunities to become real characters, but also to present the actual conditions for women in this camp.  In the historical Deadwood, over ninety percent of the women in the camp were prostitutes, and the majority of those women either became opium addicts, committed suicide, or were victims of abusive johns.  It was a horrible life, and often a short one for the women involved.

The dangers of this life are dramatized by the introduction of geologist Francis Wolcott, a newcomer in the camp who’s arrived to seek out potential gold claims for the famous George Hearst.  Wolcott is shown as prissy, tightly wound, and even more given to erudite soliloquies than the rest of the cast.  (His “Including youth, Mr. Manual?” monologue, musing on the futility of regretting the past, delivered to a man Wolcott convinced to kill his brother over a gold claim, really is an incredible piece of writing, even more Shakespearean than usual for this series.)  Wolcott also has violent sexual desires, ones that lead him to kill three prostitutes at the new brothel opened by Joanie Stubbs.

Initially, I found the introduction of a character who’s essentially a serial killer into the cast to be distracting and simply out of tune with the rest of the series.  (Jack the Ripper aside, the serial killer phenomenon tends to be viewed as a facet of American culture post-1960.)  Rewatching the episodes, I can see a clearer storyline for Wolcott, who doesn’t give in to his bloodiest desires until his previous beating of a woman is revealed to Cy, who threatens to use it as blackmail material.  Humiliated that his secret is exposed, and unable to kill Cy for political reasons, Wolcott enters a fugue state and takes out his anger and shame on the girls at Joanie’s place.  His actions are still horrific, but not arbitrarily evil in this context.

Increasingly this year, the audience is forced to confront the reality of the dangerous life these women experienced.  Even when the most developed prostitute on the show, Trixie, makes the first deposit in the official Deadwood Bank, she records her name as “Trixie the Whore” because that’s how she’s known today, and it’s the only way Trixie can imagine she’ll be remembered.  If there’s any humor to be found, it’s extremely dark, and perhaps best suited for a truly callous man like Cy Tolliver. 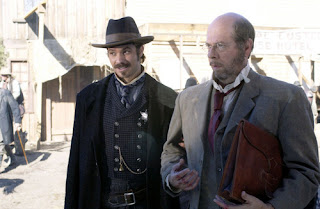 Where is “Yankton,” Exactly?
Season Two can be hard to swallow at times, given that much of the dialogue is spent on the political maneuvers required to have Deadwood officially join the United States…in a manner that Al Swearengen finds personally beneficial.  (Although Al’s interests and the camp’s usually align.)  Rewatching the episodes, it’s easier to catch what’s going on -- George Hearst has financial interests in the Dakota Territory, which will likely enable him to buy up the existing gold claims at a cheap price, after the government of Yankton declares the current ownerships invalid.  Al Swearengen conspires to find an advantage over Yankton, using Seth Bullock’s existing ties to Montana to invent a rumor about Montana competing with the Dakota Territory over the property.  Fearing that Montana will claim Deadwood, and all of the precious gold in those hills, Yankton is more amiable to new terms, ones that will enable the pioneers to keep their existing property.

What’s harder to discern is what exactly Al is up to during his conversations with Miss Isringhausen, the tutor employed by Alma Garrett who turns out to be a secret operative of the Pinkertons.  I get that he’s offering terms for her to lie to the Pinkertons and get out of town, but the specifics of the deal are often hard to decipher.  I’m half-convinced that Miss Isringhausen is another character that Milch retroactively decided to elevate to a higher status, given that she barely speaks in her initial appearances.  It’s possible he realized quickly that Sarah Paulson (whose career has exploded recently) was too good an actress to squander in such a small role.

That Ain’t Right
Even as the exterior sets are becoming increasingly packed with extras (an acknowledgement of how quickly the population of the real Deadwood camp exploded), The Gem Saloon usually appears vacant.  So vacant, you’ve got to question how Al keeps the place open.  The real Gem was far busier than we see on the series, with crowds of people, stage shows, and even boxing matches. 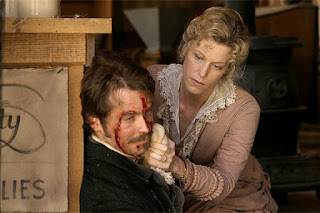 All Things in Time
Milch’s tendency to set each episode one day after the last is exaggerated this year, as there are two separate two-parters that both take place on the same day.  The only break in day-to-day continuity this year is the season finale, which takes place a week after the previous episode.  Setting every episode so closely to the next creates some quirks with timeline, such as just how quickly Al Swearengen recovers from the brutal beating Seth gives him in the premiere, and the near fatal kidney stone that puts Al out of commission for the next two episodes.  (And Seth would require his own recovery time after his fight with Al, but this is also glossed over.)  We also have questionable events such as the Yankton commissioner Jarry reading a story in the Deadwood Pioneer newspaper the morning it’s published, in a different town, and arriving in Deadwood on the same day to address the rumors spread by the paper.


Next time: My least favorite Deadwood season.  The second year holds up much better than I remembered, so will I change my mind on Season Three?
Newer Post Older Post Home
Posted by G. Kendall at 6:00 PM