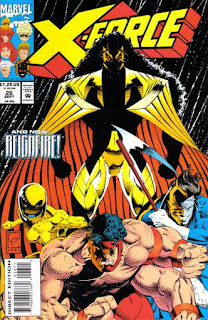 In a Nutshell
Reignfire debuts as Cable deals with the changes in X-Force since he left.

Plot
X-Force holds vigil as Cable fights for his life in the wake of his fight with Magneto. Three days after he regain consciousness, Cannonball & Sunspot leave for Madripoor, much to Boomer's dismay. Later, a drunk Siryn hits on Shatterstar and Cable before passing out and being put to bed by Warpath. Later still, Shatterstar's TV watching habits irritate Rictor, who still doesn't like Cable. In the wake of his various observations of the team, Cable wonders if he can be a soldier, teacher, father and friend to the team, though he's decides to at least try. Meanwhile, Reignfire breaks former Mutant Liberation Front members Wildside, Forearm, Reaper and Tempo out of a Federal prison, and asks them to join a new iteration of the team, led by him. Their first mission: to capture and kill the head of Project: Wideawake, Henry Peter Gyrich.

Firsts and Other Notables
Reignfire makes his first appearance in this issue, essentially reforming the Mutant Liberation Front (as its leader) by breaking Wildside, Reaper, Forearm and Tempo out of prison. He represents X-Force's new mystery du jour, and will remain so right up until "Age of Apocalypse", when he'll be revealed to be a time-tossed Sunspot just before that storyline begins, only to be quickly hand-waved away after (and then, much later, he'll be retconned into not being Sunspot after all, sort of). 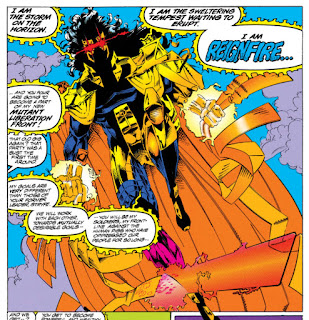 In recruiting four of Stryfe's former MLF members to his new incarnation, Reignfire does that thing that is so in vogue at this time of stating each character's codename and real name, followed by a brief description of their powers and/or personality. As a result, we learn the real names of Wildside, Reaper, Forearm and Tempo this issue, and they get arguably more characterization, however expositorily, in four panels than in all their previous appearances combined (save for perhaps Tempo, who was at least shown to be somewhat conflicted about the MLF's actions against her father in X-Factor #78). 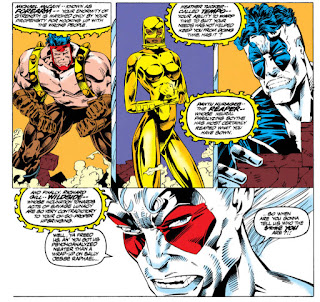 Something I failed to mention with everything else going on in issue #25 is that it was Greg Capullo's last issue as regular penciler, ending a short but influential eleven issue run on the series. Matt Broome, an artist I know mostly as "that guy who drew a couple of issues of X-Force after Capullo left", draws this issue and the next, before new regular artist Antonio/Tony Daniel comes aboard (Capullo does draw the covers to this issue and the next, for what that's worth).

Cable's sentient computer program and the remnants of X-Factor's Ship, Professor, is now integrated with Cable's bionics as of this issue, in the wake of Cable rescuing him from Avalon in the previous issue, which basically just means Cable is now capable of having a discussion via internal monologue.

Cannonball & Sunspot leave this issue to tell Karma, who is in Madripoor (which is where we last saw her, cutting ties with her criminal uncle, in Wolverine #30), about Illyana's death. We won't actually see her, but she will show up for the upcoming "Child's Play" crossover with New Warriors that wraps up the Upstarts plotline, and having her existence and history with the characters acknowledged is still appreciated.

Siryn gets drunk in this issue, and it's revealed that this is something of a regular occurrence, to the point where Warpath has taken it upon himself to watch after her and keep her safe as she drinks; this marks the beginning of the "Siryn is an alcoholic" subplot and an intensifying of their romantic pairing, hinted at a bit in the past, as Warpath admits that he doesn't try to stop Siryn more aggressively because he's afraid if he does, she'll push him away. 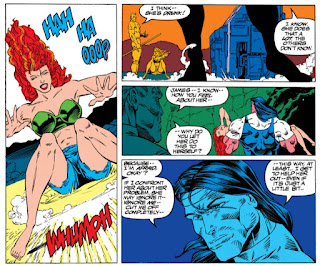 A Work in Progress
The opening pages of this issue feature Cable struggling to survive Magneto's attack on him from the previous issue; it then jumps ahead to where the character is back up walking around, but still healing. 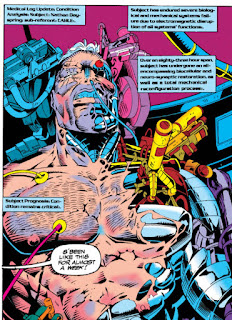 There's a lot of talk about how much of a machine Cable is, "nuts & bolts" cracks, things like that, which are somewhat at odds with the later revelation that most of Cable's metal parts are the result of the techno-organic virus he was infected with as a child. Of course, even if Nicieza had that in mind already, X-Force wouldn't know it at this point, but even the art is still depicting Cable's metal parts as much more analog/traditionally-cyborg. 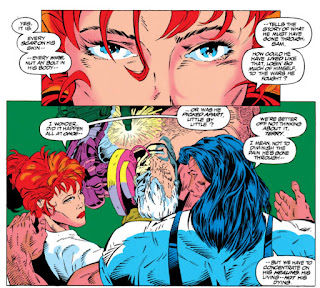 As Sam leaves for Madripoor, Boomer grumbles and mentions not knowing the place, despite the fact that she fought Stryfe and the MLF there alongside Wolverine in New Mutants #93-94. 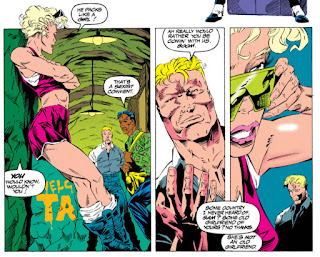 Cable notes that Siryn was left messed up by her possession by the Shadow King circa the "Muir Island Saga", something that's never really been presented in the text before (she just sort of showed up in issue #3 and has been a part of the team ever since, without issue), but still makes sense and adds some dimension to her character, albeit, once again, fairly expositorily. 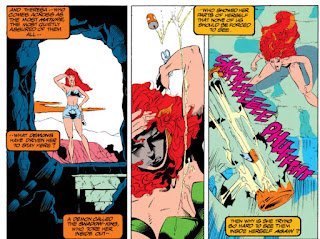 In a more subtle bit of characterization, Shatterstar, born and raised on the media-obssessed Mojoworld, is shown to be a channel surfer, in that he only ever surfs so as to watch as much TV as possible. 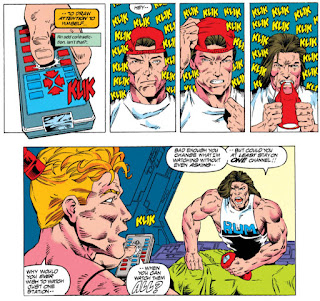 Despite acknowledging that Cable did not, in fact, kill his dad, Rictor still doesn't like Cable very much, though Cable is glad both he and Sunspot are back with the group. 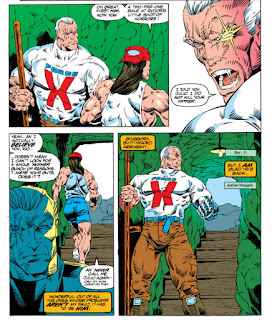 The Grim 'n' Gritty 90s
At one point, Rictor can be seen watching Batman: The Animated Series. 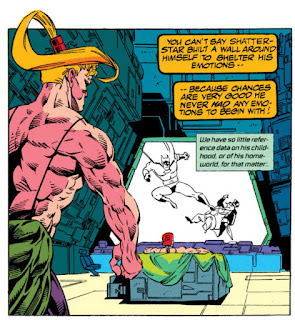 Artistic Achievements
There's a weird one panel shot as Cable wakes up that makes it look like he has his goatee from contemporaneous issues of Cable, but it doesn't appear before or after that one closeup panel. 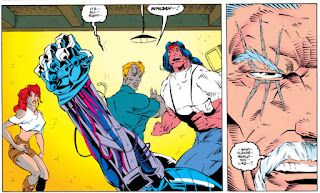 Young Love
Presumably in an effort to bump up the soap opera elements of the book, Rictor makes a move on Boomer as soon as Sam leaves, though she immediately rebuffs him, and I don't think this leads to any ongoing love triangle for the three.

It's in the Mail
A letter in this issue conveniently asks when Dani Moonstar is going to be seen again.

Austin's Analysis
Hot on the heels of X-Men #24, this is another Nicieza Quiet Issue (though it's final pages setup the next story by introducing Reignfire and the new MLF). It's wisely built around Cable, and Nicieza uses this as an opportunity to essentially reintroduce the character after his prolonged absence, and integrate him into Nicieza's post-Liefeld take on the series. It's effectively a more dedicated version of similar efforts sprinkled throughout the previous issue, and while the end result is by no means as compelling as similar "Quiet Issue" efforts from Lobdell nor as effective at establishing a specific overriding tone as X-Men #24 (it's mostly a lot of Cable thinking how much various X-Forcers are or are not like he was at a similar age, and how he needs to take a different approach with them than he did in the past), it's an appreciated and necessary reflection for the character. In the wake of all the changes the series and characters have gone through, the only way Cable could be credibly reintegrated into the book is to have him reflect on those changes, and this issue gets that done.