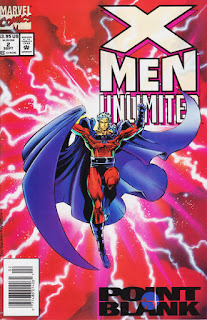 Plot
A former East German solider named Adrian Eiskalt recounts to his psychiatrist an encounter with Magneto in which Magneto killed Adrian's brother. In New York, Gabrielle Haller leads a symposium on Magneto, later meeting with Adrian to discuss their respective governments' desire to eliminate the threat he poses. Adrian insists he has no desire to kill Magneto, and Haller agrees to share information, but she can see the desire for vengeance in Adrian's eyes. Meanwhile, Exodus offers Phantazia a place on Avalon, but she reluctantly turns him down when he reveals her fellow Brotherhood of Evil Mutant teammates are not invited. As Adrian studies the information on Magneto provided by Haller, Haller compares notes with Moira MacTaggert. This leads to the creation of a suit which will mask Adrian's bio-electric signature, and a taser gun made of plastic. Later, Henry Gyrich briefs the Commission on Super-Human Affairs on Magneto's return, and while the group approves of sending Adrian to engage him, they're uncertain how to draw him out. Adrian has an idea, however, and lays in wait at the site of Magneto's wife Magda's grave, the same spot where Magneto killed his brother years ago. But when Magneto arrives and Adrian has him in his sights, he finds himself unable to act, having gained a better understanding of the man from his research, and realizing that when he killed Adrian's brother, he did so only in self-defense, after Adrian's brother attacked him. As Magneto leaves, Adrian is left alone, realizing all he's ever really had was his hate.

Firsts and Other Notables
This issue serves as a kind of "unified field theory" for Magneto, laying out his history in the midst of his central role in "Fatal Attractions" and the X-Men's thirtieth anniversary celebration and attempting to reconcile the occasionally-disparate depictions of the character in a consistent and reasonable way. 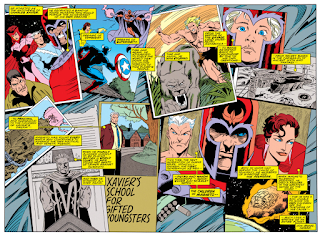 In the process, it reveals that his birth name is Erik Lensherr (Magnus, the only other name he's ever given, is said to be his middle name) and, more controversially, it is confirmed that the character is  Romani, rather than Jewish (as had never been technically confirmed before but repeatedly hinted at and generally accepted by fans and creators). Nicieza has said the decision to make Magneto Romani came from editorial, though it's not clear why (some have said Marvel was reluctant to have one of their top villains portrayed as Jewish, apparently caring more about angry Jewish people than angry Romani...), and Nicieza has argued there are semantical ways to reconcile past statements made by Magneto implying he's Jewish with this retcon. Whatever the rationale, the change ultimately won't stick, with both the Erik Lensherr name and the Romani heritage eventually retconned out, the first in X-Men #72, the latter once and for all in 2008's Magneto: Testament miniseries (which confirmed Magneto's Jewish heritage and also established the character's true real name as Max Eisenhardt, a change which has stuck to this date). 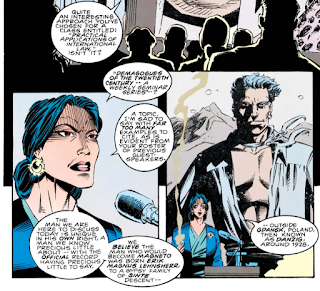 All that said, the name "Erik Lensherr" made its way into the animated series (which makes sense, since it was being made around the time the name was introduced) and apparently caught the ear of somebody involved in the production of the first X-Men movie (slightly more odd, as it had been retconned into being a fake by then), as it is used there and thus in most subsequent films, leaving at least a generation or two of the general non-comic-book-reading public recognizing "Erik Lensherr" as Magneto's name.

As with many issues around this time, this was published notoriously out of sequence with other issues - it was intended to come out after Uncanny X-Men #304, which is the big official "return of Magneto" issue, and even references events from that issue (incorrectly, as it turns out - Gyrich notes that Magneto hasn't harmed anyone since coming back, but we'll see that not to be the case in Uncanny #304), including, possibly, the EM storm that Magneto unleashes in X-Men #25 (which is the tipping point into direct action against Magneto for Professor X in that issue); it's unclear if the storm referenced here is meant to be that one, or something else. But because Uncanny #304 was so late, this issue came out first, before the events it referenced, thus further diluting the impact of Magneto's return (after the character technically already returned in X-Force #25) by treating his presence in this issue as a routine thing instead of the biggest return appearance of the character to date. 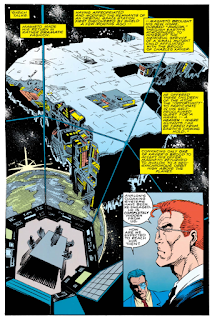 It's said here that Magneto used his power to affect the iron in blood, causing strokes and seizures; using his power on the iron in blood is something of a hallmark for the returned Magneto, one of those things we've never really seen him do before but he does a lot around this time (see also: unbrainwashing Rusty & Skids in X-Force #25), leading up to his attack on Wolverine in X-Men #25. 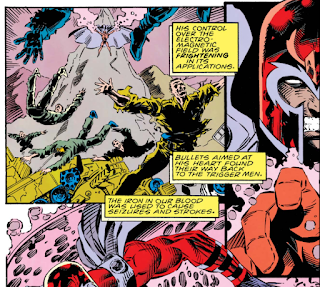 Gabrielle Haller, Xavier's baby mama, pops up here, for the first time since X-Men vs. Avengers. She and Moira compare notes on Magneto, as well as on being lovers of Xavier's. This is also the point at which Moira, who was fairly traumatized by Magneto's death and the events surrounding it, learns he is still alive. 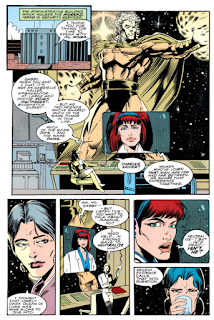 Briefly glimpsed in this issue is Jonathan Chambers, who has written a book titled "Fatal Attractions" about Magneto; he will appear again in X-Men Annual #2 as that issue's "new" character, Empyrean. 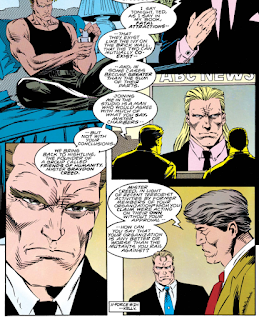 Exodus pops up briefly, appearing briefly before the Brotherhood of Evil Mutants to offer Phantazia sanctuary on Avalon, in the process revealing her real name to be "Eileen Harsaw". 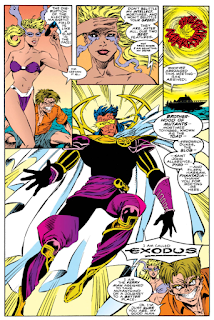 He does not offer sanctuary to Toad, Blob or Pyro, citing the first two as being too driven by greed (with Toad, probably not-incorrectly, also believing this is just Magneto sticking it to him again after all those years serving as his infantile lackey in the Silver Age Brotherhood) and Pyro as being "tainted", which is the first indication that Pyro has the Legacy Virus (something which will be confirmed in X-Men Annual #2 and then drag out for seemingly-forever, almost as long as the actual Legacy Virus plotline). 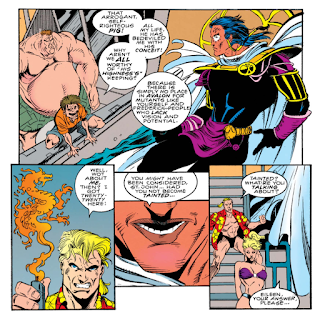 As I've mentioned in various "Unstacking the Deck" posts, Magneto tends to be portrayed well in static, regal images, and the cover to this issue, while nothing fancy, is another example of that.

Creator Central
With Lobdell writing the debut issue of this series, Fabian Nicieza handles this one. He is joined by future X-Factor penciler Jan Duursema.

A Work in Progress
In the opening flashback, we see Magneto visit the grave of his wife Magda at the base of Wundagore Mountain (where she gave birth to Quicksilver & Scarlet Witch, unbeknownst to Magneto, before dying), and Bova, the cow-woman nursemaid who briefly took care of the infants, makes an appearance. 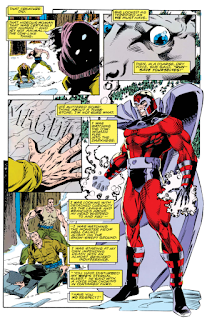 It is said that Magneto built the monument to Magda when he learned the truth about Quicksilver & Scarlet Witch (and where Magda died), setting this flashback sometime between the Vision & Scarlet Witch miniseries where he learned that information, and New Mutants #18 (when Warlock destroyed Asteroid M, after which Magneto adopted a different look before eventually joining Xavier's school).

Graydon Creed makes another talk show appearance, peddling the official line that the Friends of Humanity group which kidnapped Rusty and Skids in X-Force was a militant splinter group and wasn't officially sanctioned by him. 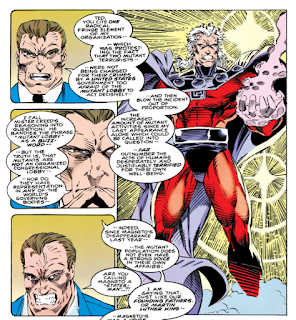 The Grim 'n' Gritty 90s
The then-recent dismantling of the Berlin Wall is referenced. 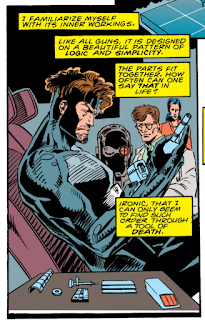 Austin's Analysis
Putting aside the retcon involving Magneto's heritage (which falls somewhere between mildly-annoying and deeply insulting, depending on your take), this is actually a really solid issue. The plot is a little dry (it's a lot of talking heads) and the art isn't great (those talking heads around re-purposed shots of Magneto, but it is clear and doesn't detract from the story), but in presenting essentially a dramatized Marvel Handbook entry on Magneto, it manages to effectively blend all the various representations of the character, from ranting Silver Age looney to the more haunted villain-turned-headmaster of Claremont, to the hard-edged isolationist that followed his departure from Xavier's, into a cohesive whole. As these things do, some rough edges get sanded down (it's always been hard to reconcile Silver Age Magneto with Holocaust Survivor Magneto, powers-messing-with-his-head retcons aside), but the end result holds together pretty well as a mostly entertaining character study. That it sets up a fairly well-balanced Magneto that is more or less torn apart in his next published appearance isn't this issue's fault, and in the grand scheme of things, that later Magneto reads far more like an aberration, with the measured, unified Magneto presented here more consistent with the character's overall depiction, both historically, and in the (further) future.

Next Issue
Tomorrow, Deadpool hunts for Tolliver's will in his debut miniseries, and Friday, Excalibur gets their own annual. Next week, Magneto returns officially in Uncanny X-Men #304.
Newer Post Older Post Home
Posted by Austin Gorton at 12:00 PM