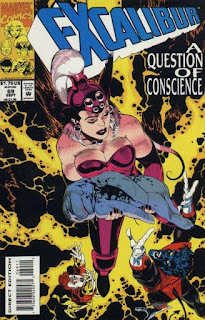 In a Nutshell
Excalibur fights to clear Cerise's name.

Plot
On the verge of being transported to a prison planet, Cerise tells a fellow inmate about the crimes of which she's been convicted, when she served as part of a Shi'ar mission to recruit new worlds into the empire. Meanwhile, Nightcrawler & Micromax teleport onto the Starjammer. Back on Earth, Feron overhears Kitty trying to help Meggan, and concludes that Meggan simply needs to speak with Captain Britain. Back on the prison planet, Kylun & Phoenix attempt to rescue Cerise, but the sight of Phoenix riles up the inmates and guards, while back on the Starjammer, Corsair argues on Cerise's behalf with Lilandra. When the Empress refuses to intervene, Corsair decides to help Nightcrawler find out the truth. They arrive on the planet as Phoenix & Kylun end their fight, and learn that Cerise left a recording admitting her guilt shortly before destroying the ship on which she served. Elsewhere on the planet, Cerise is being hunted by a new Fang.

Firsts and Other Notables
Cerise gets her backstory filled in this issue, as we learn that she was part of a expeditionary force operating as part of the Shi'ar Empire before coming to Earth. She believed the mission to be benign, but in actuality, it was intended to subjugate the locals. Upon learning this, Cerise presumably destroyed her ship and everyone aboard it and, feeling guilty, left a recording taking the blame for those deaths, leading to her conviction in absentia by the Shi'ar.

This issue marks the first appearance of a new Fang, the one-time Imperial Guardsmen whose costume Wolverine stole in X-Men #108, and who was later transformed into a Brood in X-Men #162. She will make her final appearance, to date, next issue. 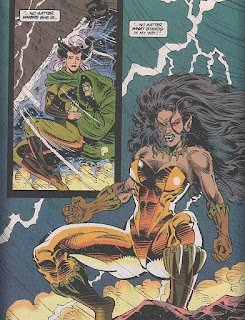 A Work in Progress
Rachel's role as an avatar of the Phoenix and that entity's history with the Shi'ar both comes in handy and triggers a fight, though it's noted that Rachel is not actually the Phoenix anymore.

Lilandra appears briefly, refusing to hear Cerise's side of things, ordering around the Starjammers, and in general, acting a far cry from her "sympathetic lover" appearance in Uncanny X-Men #304 (though in obviously a vastly different context). 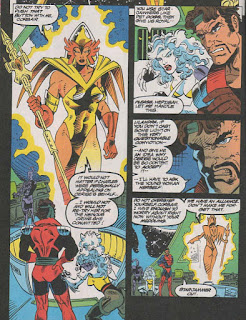 In the process, the somewhat tenuous relationship between the Starjammers (still technically pirates) and Lilandra (whom they helped reclaim her throne) is highlighted, with the Starjammers ultimately siding with Excalibur.

The Reference Section
There's a few obvious Star Wars references sprinkled throughout this issue, starting with the opening narration setting the story a long time ago in a galaxy far, far away (which, of course, isn't really accurate for this story).

Later, Phoenix tries to play the "you don't need to see identification" card. 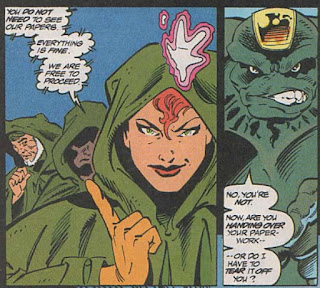 (Earlier, Nightcrawler references sneaking aboard a spaceship via the garbage chute as something he saw in the movie, which might be a reference to either A New Hope or The Empire Strikes Back, albeit a garbled one).

Austin's Analysis
I could probably just cut-and-paste my review of the previous issue here, because everything I said there applies to this one: the art is still lackluster (maybe a tick better than the previous issue in terms of basic storytelling, or maybe my senses are just getting duller), and the background info on Cerise would still be a lot more interesting if I didn't know she was going to be written out of the series next issue. This issue has some mildly interesting Shi'ar developments (including the relationship between the Starjammers and Lilandra, and seeing Lilandra in her "merciless empress" role, something that usually only pops up outside the X-books, rather than the usual "supportive Xavier lover" role) and the average Shi'ar citizens' reactions to Phoenix is probably something worth exploring more, but otherwise, this is pretty much more of the same from the previous issue, and thus not terribly engaging.