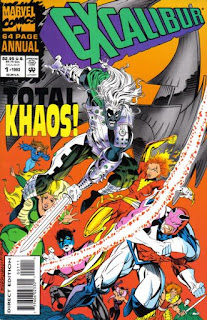 In a Nutshell
Excalibur meets the extradimensional Khaos.

Plot
Cerise wakes up from a recurring dream in which she is hunted by a dark elf. Kitty believes elements of the dream reflect Excalibur,  but Cerise insists it is real, and leads Excalibur to the source of the dream, a castle containing a wizard named Ghath, who says he has been stranded on Earth from his alternate world home of Irth. Excalibur and Ghath are shortly thereafter attacked by Khaos, the figure from Cerise's dream. Excalibur captures Khaos and brings him back to Braddock Manner, where Cerise interrogates him and learns he is actually a freedom fighter on his world, opposing Ghath. Investigating his claims, Cerise returns to the castle and is captured by Ghath as he prepares to return to Irth. But Khaos, and shortly thereafter, Excalibur, arrive after her, and they follow Ghath back to Irth and help Khaos and his allies end Ghath's threat. But in his final revenge, Ghath once more strands Khaos back on Earth. Cerise offers him a place with Excalibur, but he declines, flying off instead in search of a way home.

Firsts and Other Notables
Though Marvel had published a one-shot, extra-sized issue of Excalibur every year of its existence (including Mojo Mayhem and Weird War III), this is the first official series annual, and is numbered as such. As one of the 1993 annuals, it is charged with introducing a new character, and that character is Khaos, an inter-dimensional warrior elf with mystical powers and a flight suit from another Earth (technically, Khaos adversary Ghath is also introduced, but it's Khaos who gets the "coveted" trading card). Like so many characters launched in these annuals, Khaos has yet to appear outside this issue. 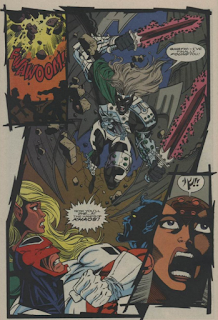 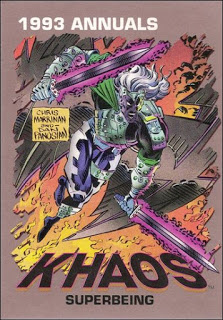 This issue is written by Evan Skolnick, a writer/editor and something of a protege of Fabian Nicieza (he'll take over New Warriors after Nicieza leaves). The middle of this issue features an extended sequence showing the history of the battle between Khaos and Ghath on their homeworld of Irth. If the whole thing reads a bit like an extended Dungeons & Dragons sequence loosely cribbed for the annual, that's because, per this article, it was - Khaos is a repurposed D&D character Skolnick played as a high school and college student (that article has some great behind-the-scenes stuff about the making of this issue, and the whole '93 annuals new character imitative - including how slapdash it was and how several creators working on the books had no idea there even was a linewide gimmick).

This issue is a notable chronology conundrum, as it features both Captain Britain and Phoenix, despite the fact that the story in which Phoenix returns leads directly into "Days of Future Yet To Come" (the moment the team arrives back at Braddock Manor after leaving the RCX compound, Phoenix declares she's heading to the future), after which Captain Britain is lost as the team returns to the present. So there's really no good time for Excalibur, with both those members present, to be hanging at Braddock Manor while Cerise has a series of bad dreams/visions. The MCP solves this by setting the issue between pages of issue #66 (pages 11 and 12, specifically), suggesting some time passes between the team's return home and their trip into the future.

The second story in this annual involves Technet stealing nectar from giant bees that turns out to be an acne cure needed by their clients. It's fun but ultimately superfluous. 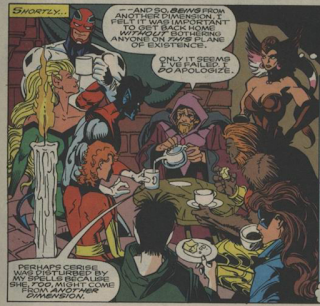 Young Love
Before he departs, Cerise gives Khas a lip-massage, and Phoenix, who theorizes that Khaos and his allies may represent the Excalibur of their home dimension, notes the similarities between Khaos and Nightcrawler. 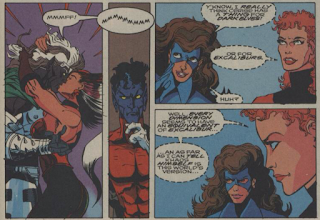 Austin's Analysis
Excalibur finally gets a proper annual, but unfortunately, it's pretty much of a piece with the bulk of their previous pseudo-annuals (ie overly-long, inconsequential, and poorly drawn), plus laden with the '93 "new character" gimmick. As with the concurrent story in the main book, the focus on Cerise would be more appreciated if not for her looming departure from the series. But outside of Cerise, hardly any of the other regular characters do much of anything in the story (I don't think Meggan has a single line of dialogue in this issue), so with Cerise either sharing most of her page time with Khaos, or the entire cast sidelined for the multi-page D&D campaign masquerading as a Khaos info-dump (which I honestly just skipped right past without reading), there's not much to get too invested in. It would be nice if there were a little more meat on the bones of Excalibur's first official annual, especially given this was published during the narrow window in which there was a fairly large cast to play with, but unfortunately, it's as sparse and unsatisfying as most of their previous "annual" ventures.