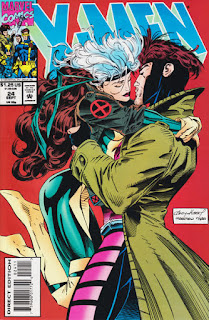 In a Nutshell
Rogue & Gambit go on a date.

Plot
Looking for a brief respite from the gloom hanging over the X-Men in the wake of Illyana's death, Rogue & Gambit are on a date at a fancy restaurant. Meanwhile, Banshee returns to the mansion and is reunited with Moira, and Beast discusses the Legacy Virus with Professor X. At the airport, Jean reunites with Scott, returning from Alaska. At the mansion, Psylocke & Revanche spar, while Kitty tries to comfort Jubilee. In the city, Rogue & Gambit take a carriage ride through Central Park. Back at the mansion, Scott shares his encounter with Mr. Sinister with Xavier, Beast & Moira, and they worry that the Legacy Virus could be spreading into a full-on plague. Outside, Wolverine also tries to comfort Jubilee, while Psylocke & Revanche attempt to make peace with each other. As Scott & Jean go to bed, they vow to remain together in the face of all obstacles, despite everything else feeling like it's falling apart.

Firsts and Other Notables
After an aborted attempt in issue #4 and issues upon issues of flirting, Rogue & Gambit finally go on a date in this issue, and it more or less marks the next step in their relationship, as they go from "flirt a lot" to a genuine couple.

Banshee returns to the mansion in this issue, somewhat oddly, as he left in the first place to chase after Moira (who left in issue #4), but she's been hanging around more or less since "X-Cutioner's Song" (since she was needed to serve as Xavier's doctor in that story) while he's been, per this issue, vacationing in the Canary Islands. At any rate, while he never really formally rejoins the team, this marks his return as a recurring presence in the books, culminating in him becoming headmaster of Xavier's School in Generation X. 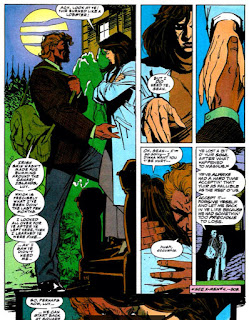 Beast and Xavier discuss Beast's relative non-involvement in treating Illyana, and his desire to be more involved in finding a cure for the Legacy Virus moving forward. Indeed, that work will come to dominate his appearances over the next couple years, as we'll repeatedly see him working to find a cure or in a similar capacity, versus more generic superhero involvement in stories. 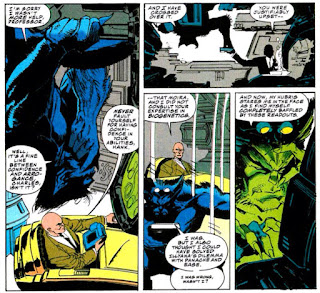 Cyclops returns from Alaska in this issue and reunites with Jean, declaring they need to be open and honest with each other moving forward, with the pair vowing to remain together, ending their short separation (and, in the wake of the Psylocke/Revanche stuff, the whole Cyclops/Psylocke flirtation subplot) and laying the groundwork for their upcoming wedding. 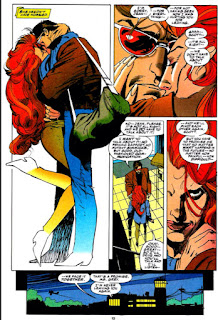 There seems to be a slight disconnect Nicieza and Kubert on the opening page, as the restaurant Rogue & Gambit are at is called "Poppa Gumbo's Cajun Cookout", yet they and the wait staff are wearing formal attire. Which isn't to say Cajun cooking can't be fancy, but that name seems to suggest a far more casual kind of restaurant. 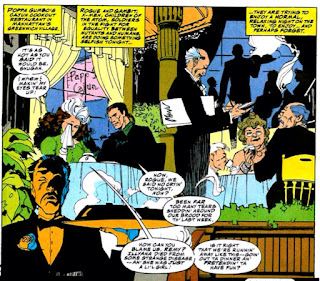 Creator Central
Art in this issue is credited to Andy Kubert "and company", suggesting multiple inkers and deadline issues. Whether due to the many hands or the deadline crunch, the art in this issue is decidedly less-polished than in the last couple of previous issues (which had been improving on Kubert's rough start on the series).

The Chronology Corner
This issue has a banner on the first page declaring it a prelude to Uncanny X-Men #304.

A Work in Progress
Continuing the "Beast midlife crisis" subplot, he notes he is just weeks away from his 30th birthday at this point.

Looking over the data, Beast worries that a full-on Legacy Virus plague is imminent, something both Xavier & Moira are later reluctant to admit without further data. 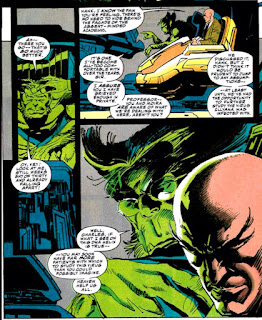 Wolverine counsels the Psylockes to get on with their lives, which more or less is what happens before Nicieza returns to their story to cleanup his retcon mess in issues #31-32. 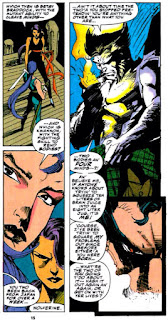 Xavier notes he's never encountered Mr. Sinister directly and only knows of him through secondhand accounts from other X-Men, a reminder that for all his then-recent ubiquity, he was still a relatively new villain at this point without a ton of appearances to his name. 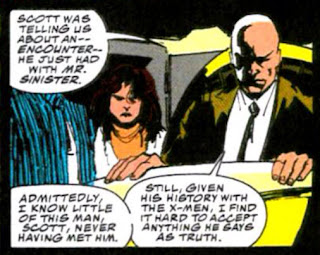 After his encounter with Mr. Sinister and his time in Alaska, Cyclops is convinced that Stryfe was his son.

Wolverine & Jubilee share a moment together, as he helps her grieve for Illyana. 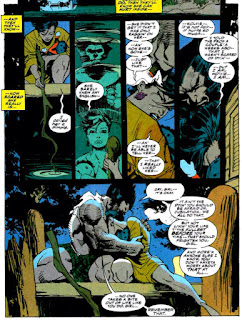 Artistic Achievements
Rather than fully draw Scott & Jean's feet as the pair reunites, Kubert outlines them and leaves them to fade into white nothingness.

In a neat (if somewhat random) detail, an archway overlooking the room where Illyana died (and where Jubilee is mourning) is drawn to resemble Magneto's helmet.

The layout of the final page depicting Rogue and Gambit's date is especially nice, with a backwards L panel running along the bottom and right side of the page, and the image therein almost pastoral in its depiction of a quiet evening. 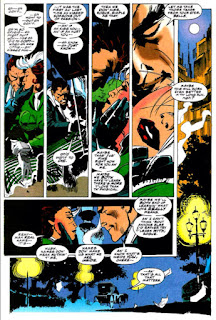 Young Love
Gambit & Rogue have an exchange where they answer a question with another question, including why Gambut never talks about Belladonna, and why Rogue doesn't tell anyone her real name (it also features Gambit continuing to not take no for an answer as he pesters Rogue about not letting him kiss her). 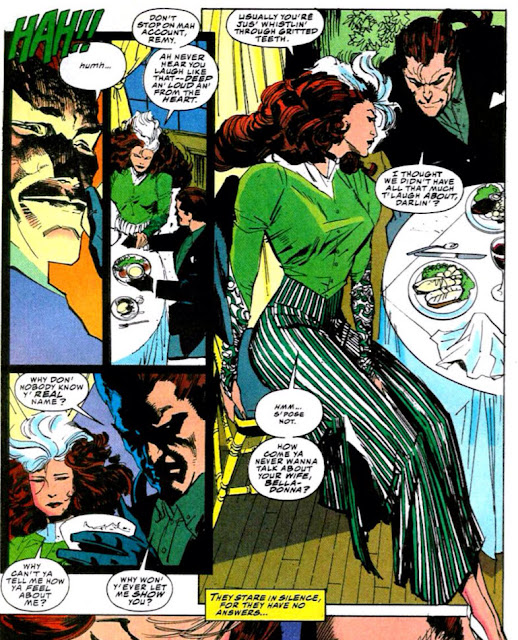 Rogue later nearly does tell Gambit her real name, but he interrupts her, saying it doesn't matter, which was definitely maddening to teenage me who had a strange obsession with wanting to know character's real names (it probably stemmed from my trading card habit and not wanting "unknown" listed on the backs of cards under "real name").

Putting an end to some of his skeeviness, Gambit does finally tell Rogue there can be more to love than the physical. 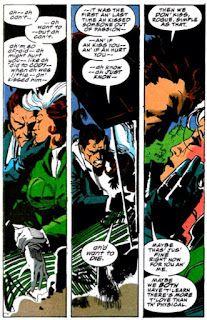 The issue ends with Scott and Jean going to bed together, and while it certainly stands to reason a pair of adults in a long-term relationship who have lived under the same roof for years and have had sex together in the past would (literally) sleep together, this may be the first on-panel indication of such. 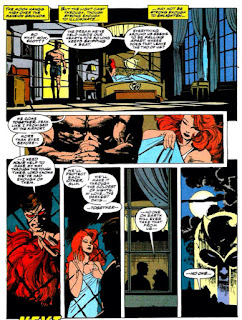 In the Mail
This issue gets a two page letter column (possibly another indication of deadline issues). One of the responses suggests that Cyclops may be wrong in his assertion that Stryfe was his son. Also, there's a "Fatal Attractions" checklist at the end of the letter column which doesn't include Excalibur #71 for some reason.

Austin's Analysis
This is Nicieza's first proper crack at a Classic Claremont Quiet Issue (last issue kinda was one, but that was technically closing out the Psylocke/Revanche story, amongst other things), and while he's not quite as adept at the style as Lobdell (the overwrought faux Claremontian purple prose is much more of a Nicieza thing), it mostly still works here. A lot of that is down to the tone: set after Illyana's death but before Magneto's return in Uncanny #304, there's an ominous feeling hanging over this issue that overrides even the happier moments (like Rogue & Gambit's date, Scott & Jean's reconciliation, and the Banshee/Moira reunion). Between the looming threats of Magneto and the Legacy Virus, Nicieza nails that feeling of this being the calm before (several) storms. Plenty of other stuff works in this issue (this is probably one of the better Rogue/Gambit romance moments, and as powerful as Uncanny #303 is, it's nice to see Jubilee sharing her grief with Wolverine as well), but the big takeaway is the feeling that bad times are looming on the horizon, which does a lot to add to the "epic" feel of events at this time.

Next Issue
Tomorrow, Cable heals up in X-Force #26. Friday, Excalibur in space in Excalibur #69. Next week, Uncanny X-Men #305.