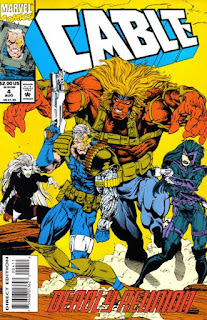 In a Nutshell
Cable reunites with the Six Pack.

Plot
Kane makes a cup of coffee while Bridge & Cable fight, before the pair agree to a truce: Bridge will tell Cable everything he knows about X-Force's whereabouts, in exchange for Cable helping Hammer walk again. Meanwhile, Vanessa bring Domino, Grizzly & Hammer to X-Force's old base in the Adirondacks, promising she can locate X-Force's current location from inside. In the South Pacific, Sinsear is monitoring transmissions, stopping when he catches a reference to Cable. Later, Vanessa brings Domino, Hammer & Grizzly to X-Force's Camp Verde base, just as Cable, Kane & Bridge arrive. Hammer attacks Cable on sight, but Kane gets Hammer to stand down by insisting Cable can help him walk. However, Hammer refuses to become like Cable, more machine than man. Realizing Vanessa has slipped away, Domino insists on tracking her down, and the rest of the Six Pack, including Kane, agree to go with her, but Cable says he needs to stay behind to wait for X-Force, and Kane tells him to do for them what Cable tried to do for Kane, to do right by them.

Firsts and Other Notables
This is Art Thibert's last issue as the series' regular artist (if you can call completing two of four issues by yourself, with substantial delays, "regular"), plunging the series into an artistic morass (well, moreso) that lasts for some time; it's not really until Steve Skroce comes aboard with issue  #12 that series gets another regular artist.

Even by the terrible standards of the time, this shipped notoriously late, a full eight weeks after it was supposed to be out, and after Kane & Vanessa's Deadpool appearances it sets up. Issue #5 will be so late that Marvel gives up the pretense and publishes it with a cover date two months after this issue's, a full three months after this issue was supposed to be out (which is why it'll be a few rotations before I get to reviewing another issue of Cable - there simply wasn't a new issue on the stands for a few months while other X-books were being published).

Cable is seen shaving his goatee in this issue, so if we go by the "Stryfe is in control of Cable when he has the goatee" theory, we're dealing with Cable at this point (though presumably he's been Cable for awhile and just hasn't had a chance to shave). 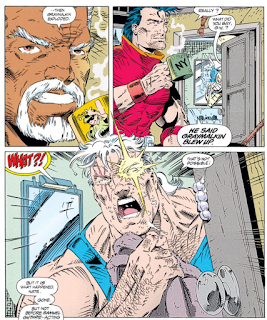 Bridge tells Cable that Graymalkin blew up, despite the fact that he learned from Professor last issue that Graymalkin's destruction was mostly staged. Bridge's conversation with Professor is referenced, as he says the program got abruptly cut off (something that happened between issues, presumably when Magneto took control of Graymalkin in X-Force #24).

We get a fairly large clue here that Tolliver is Cable's son Tyler, as Sinsear, whom we know is in the past hunting Tolliver, says he's found his target's father after overhearing Cable's conversation with Bridge. This sets up the events of next issue. 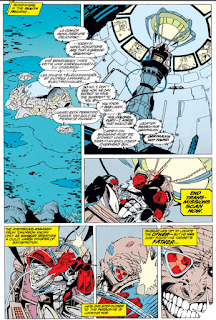 By the end of this issue, the Six Pack, which has slowly been coming together over the course of this series and over in X-Force, reunites before moving on without Cable, with Bridge saying that while the rest of the group can still work together, they can't work with Cable so long as he's incapable of not being entirely open and honest with them (which, to Cable's credit, he admits he's not). 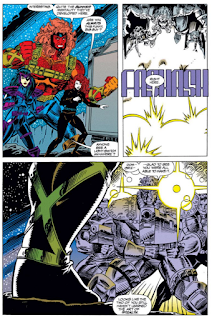 Creator Central
The credits give an art assist to Rob Liefeld, but I have no idea what for - at first, I assumed there was a reproduced panel used, but while there is, it's from Capullo's X-Force, not Liefeld. Nothing else stuck out as particularly Liefeldian in this issue.

The Chronology Corner
Obviously, this issue leads directly into Cable's appearance in X-Force #25, and his appearances in that series through issue #28 (including the second annual) take place between this issue and the next.

We will next see Domino in X-Force #29, while Kane & Vanessa will pop up in Deadpool's limited series.

X-Force is, presumably, dealing with the Friends of Humanity/rescuing Rusty & Skids, as seen in X-Force #24, when Cable and the rest of the Six Pack arrive at their base this issue.

Artistic Achievements
There's a bunch of artistic flubs and awkward storytelling in this issue, just as when Vanessa tells Domino and Grizzly they need to drill down to access X-Force's base, and the next page has Grizzly punching a wall to get inside, followed by a panel that is only partially colored. 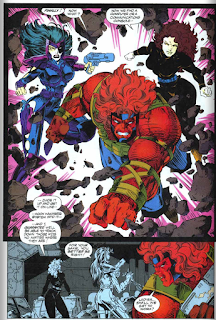 From there, the group shows up at X-Force's new base with a handwave-y explanation that Vanessa was able to use a computer at the old base to track X-Force's mutant energy signatures or some nonsense.

Later, a pair of word balloons get misplaced in a panel. 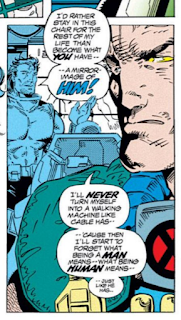 Austin's Analysis
A decent core premise (reuniting Cable with the Six Pack) let down by shaky execution. The art here is a little more consistent than in the previous issue, but still not great (there's only one credited inker instead of a bevy of them, but Thibert still gets pencil help on a couple pages, plus a mysterious assist from Rob Liefeld of all people), and there's some weird transitions and storytelling errors sprinkled throughout. And the overall plot comes from a weird place - having the members of the Six Pack converge in Cable's series makes sense, but in order to do it, Nicieza essentially lifts a plotline from X-Force (in which Domino, Grizzly and Hammer are searching for X-Force and pick up Vanessa along the way) and concludes it here, with minimal fanfare.

For anyone reading both series, it's probably fine, but for anyone reading only one or the other, they're left wondering what happened to Domino and/or where the Domino plotline that dominates half this issue came from. Granted, the vast majority of people reading this series probably were reading X-Force at the time, but this still seems like an odd place to resolve a plotline that has been running in X-Force since issue #15 (almost a full year), and to resolve it by having Domino never actually meet X-Force. It also doesn't speak well of this series, still struggling to come up with an identity of its own, that is has to crib plotlines from another book only four issues in.

Next Issue
Next week: Magneto returns (again) in X-Men Unlimited #2, Deadpool gets his own miniseries, and Excalibur gets a proper annual in Excalibur Annual #1.