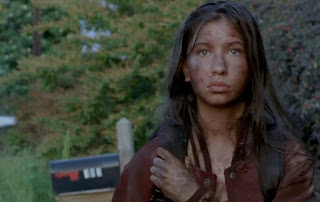 Hey! Guess what? I’m finally officially moved AND I have internet and cable again. Fun!

This means I can watch and review The Walking Dead again. Of course, I’m a few episodes behind so I’ll try to catch up. However, you’re probably already caught up. I’ll make sure to write my reviews before watching the next episode so that means you’ll be able to laugh at how incorrect my wild speculations and predictions are!

On to the review!

The second episode of the season, "JSS", was actually pretty good! Unfortunately it wasn’t amazing. This means I have very little to critique.

The episode was fairly straightforward. We start with a seemingly unrelated (although I’m not so sure) prelude of Enid’s journey (or some of it, at least) from witnessing her parent’s death to arriving in Alexandria. From there the episode is pretty much one long action sequence as Alexandria is attacked by the group with a penchant for putting Ws on their forehead (the Wolves, I assume, although we don’t actually hear them call themselves that yet…I think?).

This episode is really about dichotomies. The first is between the Wolves and Alexandria. Alexandria has survived the zombie apocalypse in relative tranquility with their walls and a zombie-collecting quarry keeping them safe. The Wolves, on the other hand, presumably have become wild and violent thanks to living on the outside in a dangerous and unforgiving world.

In the world of The Walking Dead war always defeats peace. So the Wolves have a major advantage over the Alexandrians. Luckily, the Alexandrians have a few of Rick’s crew amongst them to save the day. More specifically, Carl, Carol, Maggie and Morgan.

Now we come across another dichotomy: Carol and Morgan. Both are able to help the Alexandrians but Morgan is the pacifist (relatively speaking) and Carol has no reservations about killing. Now, I’m harder on Carol than most but, and this may shock some people, I’m on her side!

Listen, Carol is always looking for a reason to “make the tough decision” and kill someone. I get as angry as anyone when she wants to off people because they sneezed funny but when people start running into your camp and mercilessly killing your people then perhaps pacifism isn’t what is needed there. I’ll be the first to admit that sometimes killing is necessary.

So, Morgan’s mercy induced the same eye rolling from me that is usually reserved for Carol (and, these days, Rick). But Carol wasn’t infallible this episode. After Morgan saved Father Gabriel, Morgan managed to capture one of the Wolves only to have Carol kill him as soon as she could. I’m not saying he deserved mercy but hostages aren’t the worst things in the world to have. That hostage could’ve provided valuable intel!

The end of episode has Morgan and Carol walking, much like there ideologies, in opposite directions. But before that there was a final confrontation between Morgan and a Wolf inside a house. The result of the battle was less ambiguous. Did Morgan kill the man? What does this say about his ideology? Does he think he made a mistake or is his moral code more complex? As I noted above, I’m in favor of not showing mercy when none is deserved and the negative consequences of showing mercy are immediate and obvious. At the same time, I’d hate to see Morgan go down the path of Carol.

Other Thoughts:
So what if this season was episode after episode taking place during the same period of time but from different perspectives?

I wonder how Enid's parents let themselves get eaten by zombies? They weren't exactly sneaking up on them.

Speaking of Enid, I'm thinking she's a member of the Wolves. She was sneaking out for mysterious reasons last season and in this episode she said there were blind spots in Alexandria and "that's how we..." Carl cut her off probably thinking she was referring to when they snuck out together but maybe she was talking about her and the Wolves? Maybe she's the one who scouted out Alexandria for the Wolves and notified them when to strike.

Is Carol really against smoking or was that an act? I'm not a fan of smoking but in the zombie apocalypse, take comfort however you see fit!

Carol sure loves berating kids for not being tough enough, doesn't she?

I wonder if they'll be able to keep continuity and not have Ron ever lift his left arm over his head?

Oh, and Ron's an idiot. Stay with Carl...no matter how stupid his hair is.

We are introduced to de facto-doctor Denise this episode. I sense some sexual tension between her and Eugene.

I understand Denise's reluctance not to do the surgery under normal circumstances, but the woman was gonna die anyway, so what's the harm? Of course, this being The Walking Dead, the woman did not survive...to the surprise of no one.

So the truck horn wasn't intentionally used by the Wolves. Didn't see that one coming.

So was Deanna smart not to go back into Alexandria or cowardly?

I don't think the Alexandrians were as stupid/lucky as Rick does, but holy cow, how can you not think basic training with weapons is not a necessity for everybody in this world regardless of how thick the walls of your town are?

If I got my butt saved at the last minute as often as Father Gabriel does, I'd probably become a man of the cloth too!

So Aaron's backpack was found amongst the Wolves. Obviously, that's how they could've found Alexandria instead of Enid, but how'd they know when to attack?