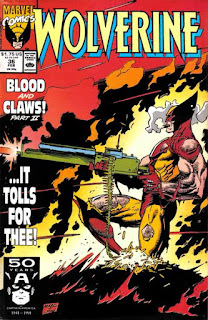 In a Nutshell
Lady Deathstrike stalks Wolverine during the Spanish Civil War.

Plot
Heading for the partisan rebels hiding in the hills outside the city, Wolverine, Puck, Ernesto and Inez race through the streets of Guernica, with Wolverine single-handedly talking out a machine gun nest along the way. Meanwhile, Lady Deathstrike is hung by the Nazi's which captured her, but easily breaks the rope then introduces herself to them, not hiding the fact that she's from the future. In Australia, in the present, the Reavers experience a sudden time vortex, and Pierce realizes that Gateway has sent Deathstrike and Wolverine into the past, and that she could be threatening their existences. In the past, in Spain, Wolverine and his friends reach the partisan camp, while Lady Deathstrike promises the Nazi captain that if they can bring Wolverine's adamantium skeleton to her father, a pilot cadet in Japan, he can create an army of super-soldiers for Germany. 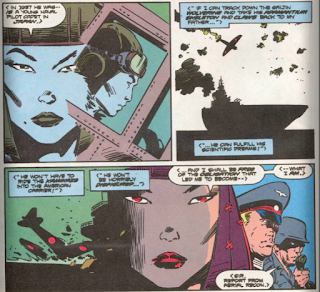 Hearing reports of a machine gun crew that seems to have been mauled by an animal, Lady Deathstrike recognizes Wolverine's handiwork. Up in the hills, the partisan camp is attacked by an airstrike, during which Puck is injured. In need of a proper hospital on the other side of the mountains, the partisans attempt to bring Puck through one of the remaining open passes. As Lady Deathstrike and the Nazis draw closer, Wolverine senses their presence, and sends the group on ahead, determined to hold the pass himself. He makes short work of the troops, but then Lady Deathstrike enters the fray, telling Wolverine to come forth and face her.

Firsts and Other Notables
The Reavers encounter a time vortex, caused by Lady Deathstrike's trip into the past, which threatens to disrupt them if Lady Deathstrike changes the past too much (though, going by the butterfly effect, the very presence of her and Wolverine has already likely changed history in numerous ways). 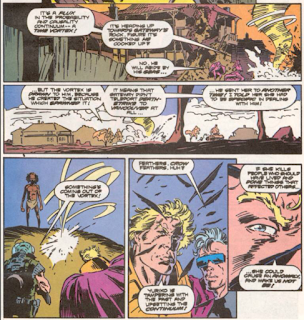 A Work in Progress
It's noted that while Puck has returned to his 1930s form, both Wolverine and Lady Deathstrike remain the same. 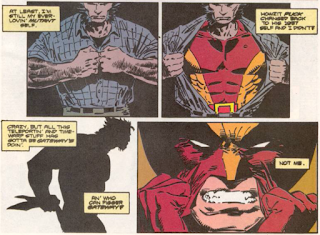 Teebore's Take
A standard middle chapter, this furthers the world of the story while putting Wolverine on a collision course with Lady Deathstrike for the finale next issue. And...that's about it. A little bit of lip service is paid to the quandary of Puck regaining his 1930s form while Wolverine & Lady Deathstrike remain the same, and there's a fun one page sequence featuring the Reavers back in the present, dealing with the possible ramifications of Deathstrike and company wreaking havoc on history (the kind of thing you don't often see in a time travel story - the effect of reality warping around the people left behind by the time travelers - where the focus is usually more on the characters who did the time traveling). Other than that, this issue is almost just pure machismo, as both Wolverine and Lady Deathstrike carve their way through both sides of the Spanish Civil War. It certainly fits with the overall tone of the series, and Silvestri & Green's art becomes even more pleasantly Mignola-esque as it goes along. All of which is fine, but also not terribly discussion-worthy.