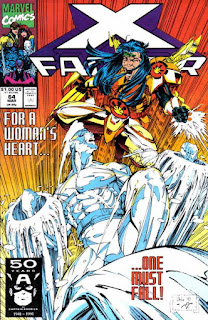 In a Nutshell
Iceman battles Hiro to free Opal.

Plot
In the wake of their failed rescue attempt, Iceman rushes off to storm Tatsu'o's stronghold himself. Some time later, Hiro approaches Opal at the graveyard on Tatsu'o's estate, and at her insistence, tells the story of her parents and how Opal came to live in America. Another evening later, Opal attempts to escape the compound, but is stopped by Tatsu'o. Enraged when he realizes Hiro has told Opal about her parents, he declares he will choose her husband himself and that she will await that marriage in a cell, then proceeds to detain Hiro as punishment, leading the remaining two Cyberwarriors to believe they are next in line for Tatsu'o's favor. But when Iceman launches his attack on the stronghold, they are shocked to discover Hiro will be leading their defense, as Tatsu'o has spared him due to Opal's apparent feelings for him. 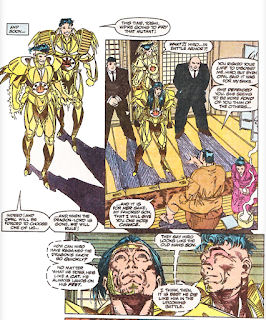 As they fly off to battle, Opal's mother brings Tatsu'o some tea, urging him to remain calm. Outside, Jean telekinetically lifts a group of Mariko's ninjas over the walls of the stronghold, and learns that Opal's mother has poisoned Tatsu'o. Elsewhere, Hiro is attacked by the two jealous cyberwarriors, who intend to kill him. However, Iceman intervenes, saving Hiro, but Hiro still feels honor-bound to attack him. A freed Opal arrives to watch their fight, but realizing they're too evenly matched, Iceman proposes to fight without their powers to prove who is better. Even without his cybernetic armor, Hiro easily bests Iceman, until Opal cries out that Hiro's internal cybernetics give him an unfair advantage. Realizing she's right, he stops his attack, allowing Iceman to win. Opal then asks the defeated Hiro to leave with them, but he insists he has sworn his allegiance to her grandfather and must stay.

Firsts and Other Notables
This is Louise Simonson's finale issue as writer of X-Factor, a run which saw her do her best to create a usable premise for the series, introduce Apocalypse, transform Angel into Archangel, and untangle the mess Jean Grey's return made of Cyclops & Madelyne Pryor's marriage (to mixed results). Her departure from this series also ends her time with the X-books, a time which stretches all the way back to X-Men #137, as well as her time with Marvel, as she leaves for DC and helps launch a new Superman book, Man of Steel, with past artistic collaborator, Jon Bogdanove, later in 1991. Simonson will stay on that book for eight years, and contribute to the larger "Death of Superman" storyline in the process, before returning to Marvel for some assorted freelance projects in 1999.

Hiro gets a "he's not such a bad guy after all" arc in this issue, sticking up for Opal and then nobly allowing Iceman to defeat him and rescue Opal. He'll pop up again in a Portacio drawn-and-plotted Uncanny X-Men story, but that's about it for the character.

A Work in Progress
As with the previous issue, some closeup panels of Iceman suggest he could be wearing some form of his inhibitor belt, though it's once again not colored grey and looks nothing like the design of the belt previously, and the belt more or less disappears without explanation from this point forward (basically, I just don't think Portacio knew about it or cared enough to draw it). 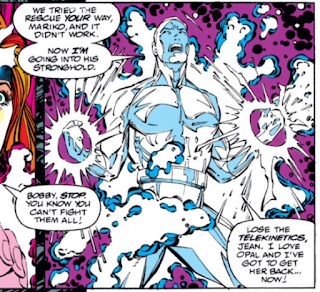 This issue reveals that Opal's birth parents were from rival crime families, caught up in Romeo & Juliet style romance that ended when Tatsu'o forced his son to turn his back on Opal's mother for fear that Tatsu'o would kill her, not knowing she was pregnant at the time. Opal's mother eventually gave birth to her in the country, then sent Opal with her mother's cousins to live in America in order to keep her away from the Yakuza lifestyle. 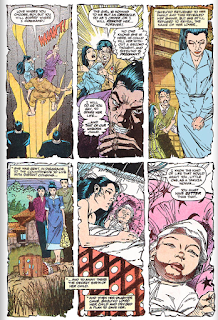 It's in the Mail
Simonson does receive a send-off in this issue's letter column, as her departure from the series is noted, along with the incoming team of Jim Lee (as co-plotter with Portacio) and Chris Claremont (as scripter), thought they are only involved in the subsequent four part story.

A letter writer asks about Opal being allowed onto Ship in issue #60 (since Ship is only supposed to allow mutants inside itself); the response suggests either that he's changed his programming since "Judgment War", or that there's something wrong with him, seguing that into a tease for the next story.

Louise Simonson on leaving Marvel
"Rob [Liefeld] was unhappy with the way the stories were going and wanted someone else to write them. Although I wasn't fired, I think I was being shoved out the door with both hands by Bob Harras. Bob was only doing what he had to do, I expect, which was make Rob Liefeld happy. Or try to. It obviously didn't make Rob all that happy...My problems were not so much with Liefeld, because all freelancers are greedy and like to grab what they can, and that's fine. I was an editor for a long time, and I know how that works. My problems were really with the editor, who was not handling things well at all. It's up to an editor to choose the people who will work on any given project, and to let them know when their services are no longer needed. I think that Bob was not willing to make those decisions. What he did to me, to Chris Claremont, to Peter David, and to Jo Duffy, was to nickel-and-dime us to death. He would change plots and blame it on the artists. He would change dialogue, and then say 'I'm sorry, but I tried to call you and you weren't home' or 'I'll be sure and tell you the next time.' He would change some of the dialogue, but not other parts, so the things people said wouldn't make sense. It was his way of letting you know he was wishing you'd go away."
Grant, Paul J. "Poor Dead Doug, And Other Mutant Memories." Wizard: X-Men Turn Thirty July 1993: p69.

Teebore's Take
And with that, Louise Simonson's X-Factor run comes to an end, two months after her departure from New Mutants, with something of a whimper. It's a perfectly functional conclusion to the Cyberwarrior/Opal kidnapping plot, but it's also not terribly exciting. Entirely too much of the issue is spent detailing the tragic Romeo & Juliet story of Opal's parents and shoehorning Hiro into the Tragic Warrior Poet trope. In fact, the title characters barely appear in this issue at all, and when then do, it's mostly Jean Grey questionably just watching while Iceman does stupid things, and Iceman showing up at the very end to lose by winning, technically defeating Hiro but with Hiro losing in such a way that it makes him look like the bigger man. In the end, it's Opal's mother who kills Tatsu'o, the threat of her daughter getting pulled into the life she tried to free her from enough to work up her courage to poison her erstwhile father-in-law's tea, and even though his death happens off-panel, her actions are really the best part of the issue.

Again, this isn't terrible - it's tempting to call the whole thing rushed, but I'm also not sure I would have wanted three issues of cyber ninja action, and Opal's been around the book long enough that devoting most of an issue to her isn't an inherently bad idea - but it's also not the best issue for Simonson to close out her run with. It's obviously very much the work of Japanophile Portacio, and it's a shame that in her last issue of the series, Simonson only gets to (barely) write two members of the regular cast.

Even moreso than New Mutants, the mark she leaves on this series is huge, as she worked hard to pull it out of its initial, ill-advised setup without simply rebooting from scratch, and building on that inauspicious beginning to create a series that could actually function long-term, doing her best to rehabilitate the characters damaged by the initial launch of the book and update/invigorate the rest, while setting up both a couple different supporting casts (first the X-Factor kids and Trish Tilby, then Opal and Charlotte Jones) as well as some recurring villains (chiefly Apocalypse). As with her New Mutants run, there were ups and down, and she wasn't always paired with the best artist (or even a consistent one), particularly after Walt Simonson left the series, but X-Factor is at this point, without a doubt, Louise Simonson's book, and it's a shame she wasn't given a better vehicle with which to say goodbye.

Next Issue
Next week, we take a look at the comic book adaptation of the X-Men's first animated adventure in X-Men Animation Special: Pryde of the X-Men.