In a Nutshell
Magneto & Rogue battle Zaladane in the Savage Land.

Plot
In the wake of attacks launched by Zaladane, the UN authorizes a SHIELD force to enter the Savage Land to stop her. In the Savage Land, Magneto, Rogue and Ka-Zar shortly thereafter come across the wreckage of the force, brought down by Zaladane's power and the natural resistance of the Savage Land to higher-order electronics. Just then, they're attacked by the Savage Land Mutates, sent by Zaladane. Magneto overpowers them, but leaves them alive at Rogue's insistence, then all three return to Magneto's citadel. Studying Zaladane's power, Magneto realizes she will cause irrepable harm to the planet's biosphere if not stopped. That night, Rogue awakens Magneto as Zaladane and her forces attack the citadel. Magneto is easily overpowered by Zaladane, and her troops threaten to route Ka-Zar's until the SHIELD unit, led by Nick Fury, emerges from the jungle and turns the tide, driving them off. 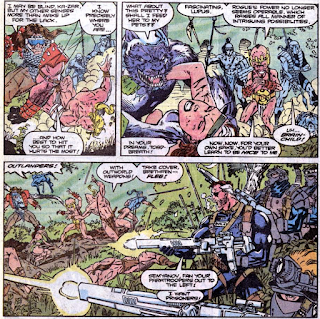 Once Rogue vouches for Magneto, he approaches the force, but when he learns one of the Russians attached to the unit had a son aboard the submarine Magneto once sank, he leaves, realizing there's too much bad blood between them to work together. Rogue chases after him, however, and convinces him to help them stop Zaladane, and the force departs to confront her. Elsewhere, the X-Men arrive on an alien world, transported there by Lila Cheney, who doesn't know where they are, as the coordinates for the location were implanted in her head. The X-Men are attacked and quickly captured by the local flora, at which point Deathbird emerges from the shadows, declaring that she needs them to slay Professor Xavier for her.

Firsts and Other Notables
Jim Lee receives sole plotting credit on this issue, with Claremont only credited with the script. Which seems odd, given that the overall plot of this issue seems designed to wrap up (or at least continue) the Zaladane/Savage Land arc from issues #249-250. Nevertheless, this makes this one of the few issues of X-Men in which Claremont doesn't formally receive at least co-plotting credit.

The Rogue/Magneto romance, which intensifies next issue then more or less gets codified by "Age of Apocalypse" a few years later, begins in earnest here, as Rogue wakes Magneto from a nightmare and he finds himself attracted to her. 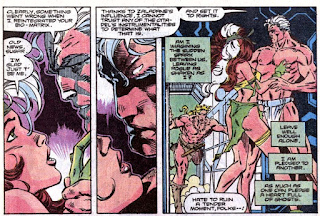 Given that Larry Stroman drew the closing pages of the previous issues, featuring the newly uniformed and re-assembled X-Men, this issue provides our first look at Jim Lee's take on the uniformed X-Men (this issue also depicts the first time Cyclops and Jean Grey meet Guido, for what that's worth). 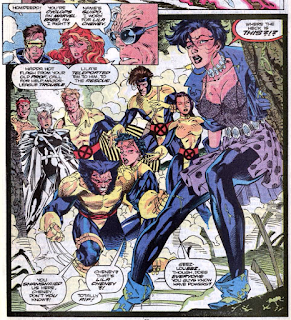 Magneto's narration references the deaths of his daughter Anya and Isabelle, tales told in the backup stories of Classic X-Men #12 and #19, respectively. 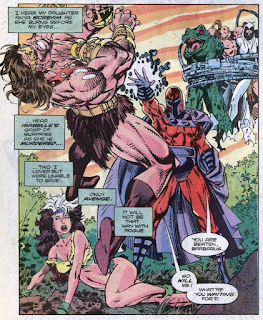 The leader of the Soviet forces working with Nick Fury in this story had a son aboard the Leningrad, the Russian nuclear sub which Magneto sank in issue #150. 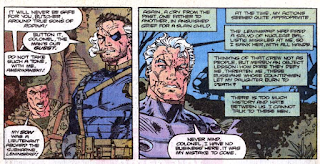 Deathbird, last seen in Spotlight on the Starjammers, pops up on the final page of the issue, having used Lila to unknowingly bring the X-Men to her; she will feature in the unfolding Shi'ar story over the next few issues.

Along with Zaladane, the Savage Land Mutates (who were created by Magneto, this issue reminds us) show up for the first time since issue #250, all looking great under Lee. 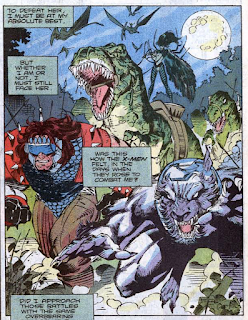 I've long wondered when, exactly, the decision to launch a second X-Men title was made; in this issue's Bullpen Bulletins column a bunch of different creators are interviewed about their New Year's resolutions (cover dated March of 1991, this issue was on sale in January of that year, so presumably the interviews were conducted shortly before the January '91 issues went to press) and one of those creators is Jim Lee. In his response, he mentions the upcoming X-Men #1, meaning that at least by late 1990 it had been decided to launch the second title, even though it wouldn't go on sale until August of 1991.

The Statement of Ownership printed in this issue lists the average number of copies sold during the preceding twelve months as 415,961, with the actual number sold of the issue nearest to the filing date as 404,300, compared to 408,925 and 436,200 in the previous year.

Just for funsies, here's a comparison of the last three years' worth of Statement of Ownership numbers:

Certainly, some of those numbers point to the oft-suggested claim that the "non-team" era was hurting sales (of course, even down sales then would be astronomical sales today), though as in most things, nothing is ever as simple as being caused by one thing. It's worth noting the series was bi-weekly for three months out of each of these years (meaning an extra three issues per year were produced), and that the peak of the non-team era also coincided with both the 90-91 bi-weekly schedule and the transition from Marc Silvestri to Jim Lee as the book's regular penciler, so the lackluster fill-in art was doing the more offbeat stories no favors.

A Work in Progress
The issue opens with another news report, this one about Zaladane's attacks, given by Trish Tilby, who's presumably returned from her assignment in India (which she received in X-Factor #59). 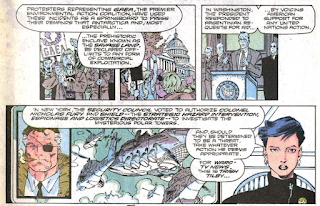 It's noted early in the issue that the Savage Land emits a field which messes with the functions of higher electronics, though the SHIELD agents' guns and helicopters are usable later in the issue.

Magneto is notably weak in this issue, his power sapped. I believe next issue attributes this to Zaladane's ascension. 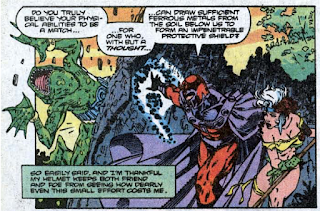 Magneto notes that he wears red, the color of blood, in memory of those who died in the Auschwitz.

Rogue's powers still haven't returned following the reintegration of her bio-matrix performed by Magneto in issue #269.

Magneto apparently carries a personal hologram projector with him at all times, enabling him to appear before Nick Fury and the SHIELD force and suss out their reaction to him without actually appearing before them. 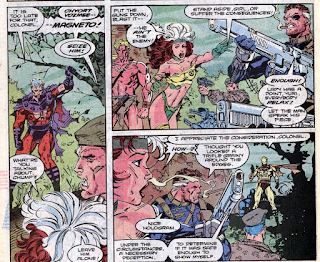 Jubilee, upon learning the X-Men are friends with Lila Cheney and that Lila is a mutant, wonders if everyone the X-Men know has powers, possibly a knowing wink on Claremont's part to his tendency to turn even the smallest supporting characters into people with super-human abilities.

Claremontisms
Magneto says Zaladane will give "no quarter" in their fight, while Rogue is supposed to "well nigh invulnerable".

It's in the Mail
This issue features a long letter from a fan that has always stuck with me: in it, he points out Claremont's propensity for writing strong, well-developed female characters, something I was subconsciously aware of prior to reading this letter for the first time, but of which I became consciously aware for the first time after reading it. The writer's crowning of Xavier, Magneto and Franklin Richards as the three most powerful mutants in the Marvel Universe has always stuck with me as well, impressing that trinity on me at a young age, and to this day, I tend to think of powerful mutants in relation to those three. 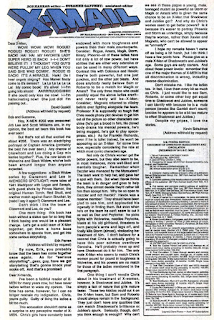 Reading the letter as an adult, the writer's criticisms become more apparent and borderline misogynistic - he doesn't like that the women are routinely more powerful than the men, though his arguments aren't terribly strong, and wnd while issue #219 is certainly a problematic issue, it's not really for the reasons he details: the X-Men are relatively cold to Havok not because he's a man, but because in their minds, he's linked to the Silver Age X-Men whom at that time they distrust due to the whole "mutant hunting" ruse in X-Factor.

Teebore's Take
This is another of my all time favorite issues. Ostensibly an excuse for Lee to do a retro Savage Land story with its scantily clad natives (including Rogue) while also giving Claremont an opportunity to tie-up his Zaladane plot, still dangling from issue #250, the story started here (and conclusded in the next issue) also serves as the finale to the character arc Claremont has put Magneto on during his tenure on the title. After this wraps, there's one more Claremont-penned Magneto story to come, but that reads much more like a denouement for the character than an actual declarative statement of his character like this.

Here, a weakened Magneto is situated between two powerful women: Rogue, his erstwhile teammate, urging him to look ahead and walk a better path, to rise above his past actions and predilections, and Zaladane, who thanks to her encounter with Polaris, now wields a similar power to his own, albeit with even greater savagery and less responsibility than he ever did, a vivid reminder of the maniacal super-villain he once was. How Magneto responds to these poles, whether he reverts to more villainous methods or holds true to the more virtuous ones represented by Rogue, is held for next issue. But in setting up that conflict, Claremont dives deeper than ever into Magneto's character, recalling both his personal tragedies and the ones he orchestrated himself (specifically the reation of the Savage Land Mutates and the sinking of the Leningrad, still the single largest act of villainy perpetrated by Claremont's Magneto).

The end result is some of Claremont's most Claremontian writing (in a good way), as he writes some legitimately poetic narrative captions in Magneto's voice, all juxtaposed against Lee's gorgeous jungle action scenes. That juxtaposition, between the deeply introspective character-based writing and the more Saturday matinee, popcorn-munching art, is another great example of the positive outcome born from the push-and-pull between two creators with seemingly different agendas, each pulling in the opposite direction and turning out one of the series' finest issues in the process.

Next Issue
Tomorrow, we say goodbye to one New Mutant and hello to another in New Mutants #99. Friday, Iceman's Japanese adventure concludes in X-Factor #64. Next week, things get animated with the X-Men Animation Special: Pryde of the X-Men