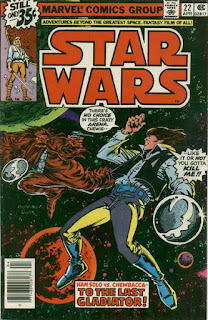 In a Nutshell
Han and Chewbacca attempt to survive the Wheel's arena.

Plot
In the zero gravity environment of the Wheel's arena, Han and Chewbacca team-up against the other combatants, much to Commander Strom's costernation. But Senator Greyshade points out that they both signed contracts to participate, which state that the matches are to the death, and can have only one winner. Should they fail to abide by those rules, both can be killed. Just then, Strom passes out, the result of the drugged drink given to him by Greyshade. Elsewhere, Luke, Leia and the droids continue to follow Greyshade's security forces, taping their reclaimation of the funds stolen by the Imperials in the name of the Rebels. But they're spotted and a fight breaks out, which ends with the arrival of Greyshade, who ushers the Rebels aboard his private yacht at gunpoint. 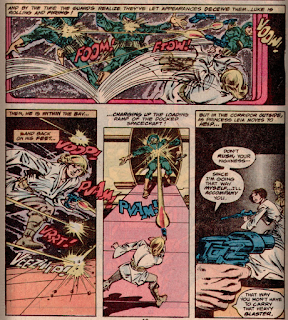 Meanwhile, Darth Vader's Star Destroyer races through hyperspace, heading for the Wheel. Aboard Greyshade's yacht, the former senator makes Leia a deal: if she runs away with him, to a world where no one has heard of the Empire or the Rebels, and promises not to try and escape, he'll let her friends go free. But, he cautions, looking to the display of the arena, she needs to decide soon, or some of her friends won't be alive to benefit from her decision. In the arena, Han and Chewbacca are left alone facing one final opponent. Han, knowing that only one of them can come out of the arena alive and believing Chewbacca has the better chance against the last fighter, tosses his blaster to his friend, demanding that Chewbacca shoot him.

A Work in Progress
In what is quickly becoming his signature move, Vader Force chokes the back-talking Captain Wermis. 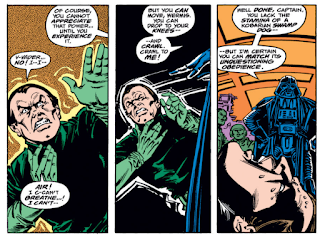 Um, Actually
Vader says that, prior to the contact with Luke which is motivating his journey to the Wheel, he believed the power of the Force was his alone; of course, later films in the series reveal that, even at this point in time, at the very least the Emperor is somebody else Vader knows who can use the Force. 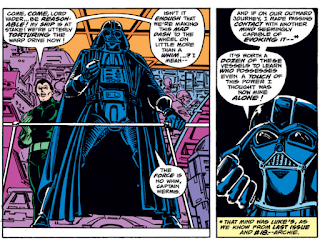 The device which enables ships to fly faster than the speed of light is again called a warp drive.

That 70s Comic
Greyshade and Strom have a conversation that, if anyone happened to overhear it, would serve as nice recap of recent happenings on the Wheel. 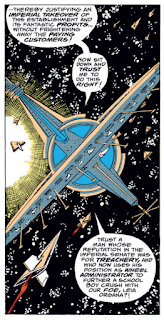 You Kiss Your Sister With That Mouth?
Luke reacts about how you'd expect to Greyshade's proposal to Leia, shooting it down on her behalf, though Leia, rightly points out its not his decision to make. 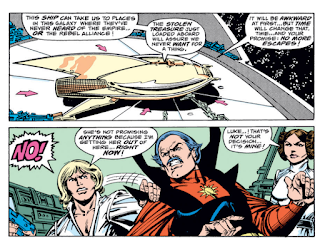 It's in the Mail
A letter in this issue's letter column points out that General Tagge was killed on the Death Star, will the response offering up an explanation that he left the station after his appearance in the film, and thus survived its destruction. 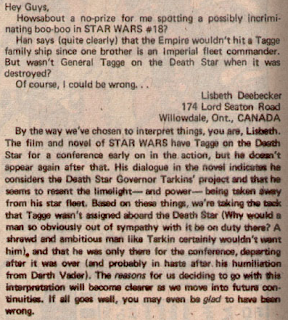 A response to another letter speaks at great length to the differences between novels and serial comic book stories, pointing out that each issue must appeal to both readers who are following along with the story chapter by chapter and readers who may be picking up an issue for the first time, saying that the latter group is far more often larger than the former group. Which is wryly amusing just for the way that's completely flip-flopped nowadays.

Teebore's Take
As the penultimate chapter in the "Wheel Saga", this unfortunately drags a bit at a time when the pace should be picking up: Darth Vader is still en route to the station, the heroes are still scattered, Han and Chewbacca are still in the arena. However, there's still some entertaining pieces on display: it's confirmed that Greyshade's interest in Leia really does stem from genuine, longstanding affection towards her (albeit formed mostly of his desire to have that which he can't have), which adds some complexity to Greyshade as the antagonist of the story. Meanwhile, Infantino is seemingly having a blast in the arena scenes, going nuts with the sci-fi imagery as Han and Chewie fight their way through a zero gravity environment, and the result is some of his best action work yet.

In the process, the Han/Chewie scenes also underscore an interesting truth about this series: as much as Luke is, ultimately, the central figure of the Original Trilogy, Han really is the star of this book at this point in time, helped in part by having received the most page time, but also because he's been at the center of most of the series big action sequences. As a result, the central relationship of the series right now isn't Luke and Leia, or Han and Leia. It's really the friendship between Han and Chewie. Which, granted, has always been a part of the Star Wars universe. But it's rarely the central relationship in a story, yet it's probably the most frequently and consistently portrayed relationship in this series at this point.

Next Issue
The arrival of Darth Vader!