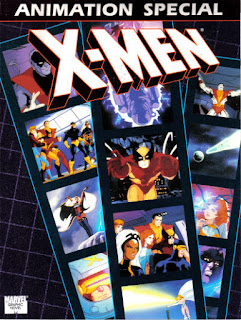 In a Nutshell
Kitty Pryde joins the X-Men and helps defeat Magneto's plan to use a comet to wipe mankind off the planet.

Plot
The morning after the White Queen breaks Magneto out of a military convoy, Kitty Pryde arrives at the mysterious Xavier's School for Gifted Youngsters. She is greeted by a mental projection of Professor X, who leads her deeper into the school, confirming that she is in fact a mutant, and introducing her to the X-Men as they train in the Danger Room. Just then, a Stage Two Mutant Alert signals, and the X-Men rush off to investigate, despite Cyclops' reservations about leaving Professor X and Kitty behind alone. As they leave, Magneto orders Juggernaut into the mansion. The X-Men arrive at the Deep Space Observatory, where Blob and Pyro are holding a family hostage. They manage to free the family but the mutant terrorists escape, while back at the X-Mansion, Magneto and Juggernaut make short work of the mansion's defenses.Telepathically sensing that Magneto is after Cerebro's mutant power circuit, Professor X gives it to Kitty and tells her to protect it while he holds off the evil mutants. But Magneto overpowers Kitty and makes off with the circuit. 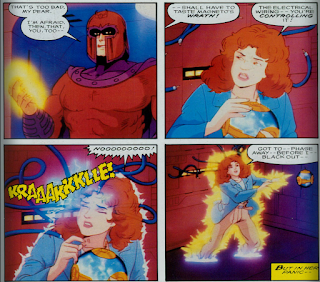 After the X-Men return home, Professor X telepathically locates Magneto aboard Asteroid M, where he uses the power circuit to complete the Magnatron, a device which augments his power, enabling him to pull a passing comet off course and towards Earth, where it will wipe out the human race. The X-Men race into space aboard the Blackbird, along with stowaway Kitty, who wants to make amends for losing the circuit. The X-Men breach the station and confront Magneto's allies one by one, until Nightcrawler is left to face Magneto alone. Just as Magneto is about to blast him, Kitty phases into the room, disrupting his shot and damaging the Magnatron. Nightcrawler is able to complete the circuit using his own body as a conduit, and Kitty manages to position Magneto so that he accidentally blasts the comet away from Earth and towards the base. Magneto then retreats, declaring that while they've saved the Earth, Nightcrawler will be lost, as he must remain completing the circuit or else the comet will turn back towards Earth. The X-Men flee the station, and at the last second, Nigthcrawler manages to teleport onto the Blackbird. The X-Men return home, confident that whatever Magneto is planning next, the X-Men will be ready.

Firsts and Other Notables
This is a graphic novel adaptation (square-bound, prestige format) of the animated "Pryde of the X-Men", a pilot episode produced by Marvel Productions (which also produced Spider-Man and His Amazing Friends and Muppet Babies, amongst others), with the intent of launching an X-Men animated series. This comic is produced fumetti-style, using stills from the actual cartoon, with dialogue and captions overlaid, instead of original art, all laid out in a (mostly) five or six panel-per-page grid.

"Pryde of the X-Men" (the animated episode) was produced using part of the budget from the Robocop animated series (also produced by Marvel Productions); in lieu of creating a 13th episode of that series, "Pryde of the X-Men" was made. However, Marvel as a whole was sold shortly after the pilot was produced, leading to Marvel Productions pretty much ceasing production on everything save Muppet Babies, and no X-Men series was ever put into production. "Pryde" also effectively marks the end of the Marvel Productions animated universe, consisting of Spider-Man and His Amazing Friends, as well as other series, in the late 70s and 80s. The Marvel cartoons of the 90s would be a whole new ball game.

The TV episode shares a lot of the voice cast with G.I. Joe: A Real American Hero, notably Michael Bell, who voices both GI Joe's Duke and Cyclops, thus cementing both characters as iconic leaders of men in my childhood brain. Notably, Wolverine has an Australian accent in the cartoon - a carryover from his previous appearances in S&HAF, though the voice director of the episode claims this was done as part of an effort to tie-in to the then-current Aussie fad, with plans to reveal Wolverine as an ex-Australian in the comics as well (though I've never heard that idea recounted anywhere else).

The core cast of X-Men is basically the post-Banshee "All New, All Different" team, with Dazzler (who was a current member of the X-Men in 1989) substituting for Phoenix, and Kitty introduced as a POV character who would have presumably joined the team in later episodes. The X-Men battle a version of the Brotherhood of Evil Mutants, led by straightforwardly-evil Magneto, comprised of bits from the original group (Magneto and Toad) as well as Mystique's group (Blob and Pyro), along with the White Queen and Juggernaut thrown in for good measure. It actually works really well as a villain team. 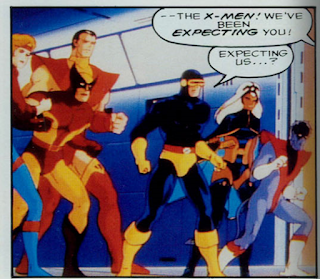 This team roster and the general character designs would later be used in the 1992 X-Men arcade game, though a lot of Jim Lee art would be used on the cabinet.

A Work in Progress
Presumably in an effort to give her a more offensive, visual power, the White Queen has the ability to create "energy lances" (presumably telepathic in nature) in addition to her telepathic powers.

As in her initial comic book appearances, Kitty is at first put-off by Nightcrawler's appearance. 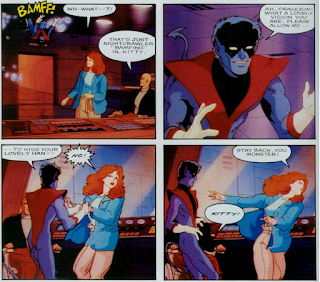 Cerebro has some kind of power circuit, which serves as the MacGuffin Magneto needs to finish his power-amplifying device to redirect the comet.

Lockheed is introduced as some kind of pest aboard Asteroid M, without any explanation, and is befriended by Kitty (and taken off the station) by the end.

Storm uses her power to contain the atmosphere within Asteroid M after the X-Men breach it from the outside, which is actually a pretty clever use of her power we don't see all that often, despite all the times the X-Men end up in space. 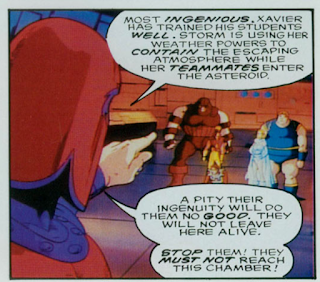 The Grim 'n' Gritty 90s
Dazzler wears a leather jacket over her uniform, a look that very soon becomes quite popular amongst the rest of the team. 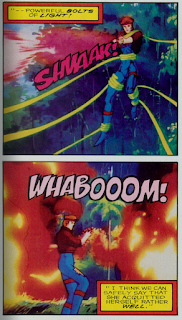 The Best There is at What He Does
Wolverine says he's going to sharpen his claws, but we all know they're made from unbreakable, razor-keen adamantium, and thus don't need sharpening. 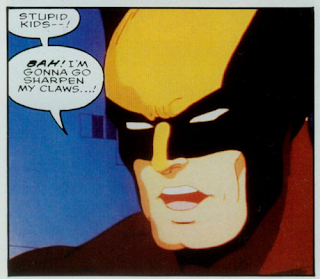 Teebore's Take
"Pryde of the X-Men" (the animated TV episode, not this comic book) actually served as my initial introduction to the X-Men and the concept of mutants (as a kid, I long wondered what Wolverine's mutant power was, since even as a kid, I knew you couldn't just be born with metal claws). A fervent watcher on Saturday mornings of the Marvel Action Hour featuring (as I remember it best) Spider-Man and His Amazing Friends, Dino-Riders, and Robocop: The Animated Series, I first met the X-Men when this aired in place of a Spider-Man episode (technically, I'd probably seen the X-Men before in previous episodes of that series - they guest starred a few times - but "Pryde" is really when they made a memorable impression on me) and between the GI Joe-esque animation (and shared voice cast in some cases) and colorful characters, I was captivated.

It helps that the story does work really well as an introduction to the team, a roster featuring pretty much a note-perfect classic lineup (plus Dazzler), with Kitty serving as an audience surrogate character, and a nice assortment of classic villains for the heroes to fight (the old "the team is winnowed down as each hero pairs off to fight one villain" technique is pretty lazy, but it also works to give each member of both teams a brief spotlight, the better to sear their individual powers and personality into young viewers' minds). It suffers from 80s cartoon plotting in places (Nightcrawler has to hang around to risk sacrificing himself nobly mainly because Magneto says so) and aside from some lip service at the beginning, the episode doesn't really do much with central theme of the X-Men (Magneto hates humans, but we're never given much reason why, specifically), but as a 22 minute introduction to the basic concepts of the X-Men and some of their more notable members and foes, especially one intended to setup an ongoing series where, presumably, a lot more of this stuff would eventually get fleshed out, this works really well.

This specific comic book adaptation of that episode, well, I'm not quite sure what the point of it even is. "Adaptation" isn't even the right word for it, as it's simply a printed reproduction of the animated series. It's hard to think of who this was targeted at: cartoon watchers would be frustrated that it adds nothing to the story, while comic book readers would likely be irritated by it not being, you know, an actual comic book adaptation. It's also not clear what Marvel hoped to gain from publishing this - a year out from the initial airing of the episode, it had to be known the show wasn't going to be made, so it's not like this works as any kind of promotional aide. Maybe Marvel intended it to be a sort of graphic novel introduction to the X-Men for new readers, but again, there's a vast difference between the way the story is graphically told here and in a comic book (plus, the $10.95 price tag doesn't seem terribly new-reader friendly). Whatever the purpose, while the animated episode still holds up as a pretty solid introduction to the X-Men and nice piece of 80s-era TV animation, this specificgraphic novel "adaptation" of the same is a historical curiosity, at best.

Next Issue
Next week, we return with X-Factor guest starring in Ghost Rider #9, the first official post-Claremont issue of Excalibur, #35, and the finale to the Spanish Civil War time travel story in Wolverine #37.
Newer Post Older Post Home
Posted by Austin Gorton at 12:00 PM