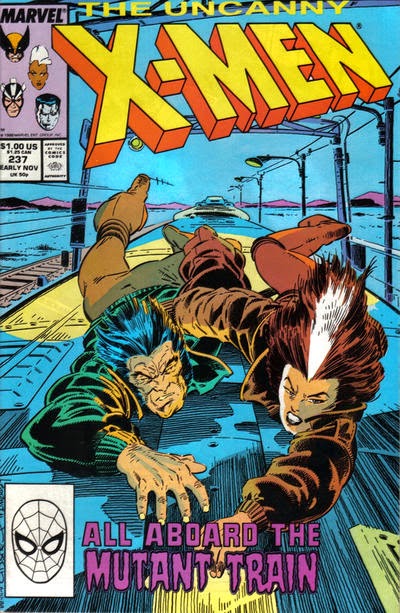 In a Nutshell
Rogue and Wolverine evade Genoshan pursuit.

Plot
As the Genoshans tracks down Wolverine and Rogue's decoy vehicle over the Indian Ocean, discovering it empty, the escaped X-Men enter a bar frequented by Magistrates in order to procure new IDs in order to lay as false a trail as possible. A drunken Phillip Moreau is in the bar as well, and starts a fight that Wolverine escalates, using the commotion to pick Magistrate pockets. Phillip, however, gets knocked unconscious and the Magistrates, angry at the way his father has been harraguing their chief of late, decide to put him on the "mutie train". Overhearing this, Wolverine and Rogue follow, chalking it up to curiousity and a hunch, and they end up sneaking aboard the train. At the Citadel, the Genegineer meets with Jenny Ransome, explaining how her father switched her records and that she will soon undergo the mutate process. He then checks in on Madelyne, who is undergoing a psychic examination prior to that same process. 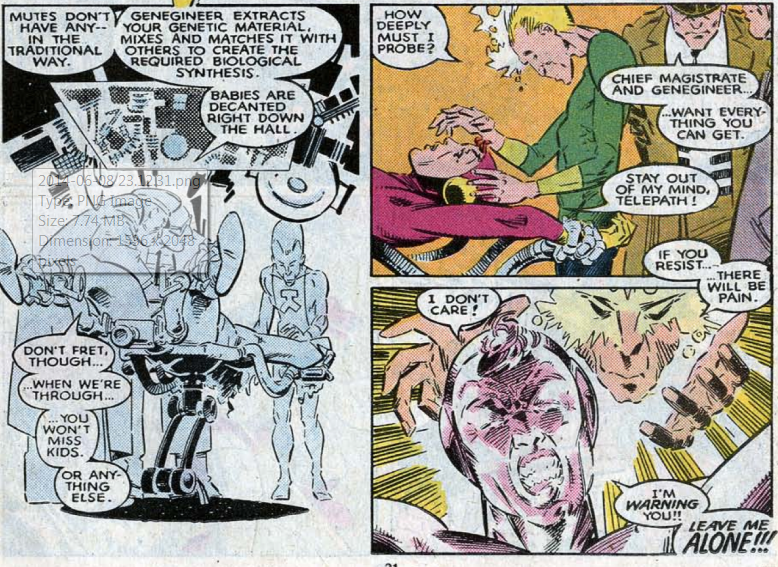 Just then, the rest of X-Men arrive on the island, running afoul of a group of Magistrates, whom they easily defeat. Just then, Psylocke is felled by a psychic attack, triggered by Madelyne, which destroyed the Genegineer's lab, killing everyone inside. Elsewhere, Wolverine and Rogue enter the speeding train to discover it filled with mutants. The mutants are less than friendly to what they believe to be two Magistrates in their midst, but Wolverine and Rogue are able to locate Phillip just as the train is stopped and boarded by Magistrates. Pointing out the unconscious Phillip, Wolverine and Rogue are given leave to return him to his father. Getting into a jeep, they drive away, with an enraged Wolverine vowing to take down the country.

Firsts and Other Notables
When a Genoshan telepath tries to read Madelyne's mind, she unleashes a psionic attack that destroys the Genegineer's lab, a further hint at the powers she'll soon develop and her true origins that will be revealed in "Inferno". And though that story will ultimately reveal that Madelyne is technically a mutant, at this point it's reasonable to assume that, with the Genoshans unable to scan her and confirm that she's a mutant, that very inability is enough to convince them she's a mutant. 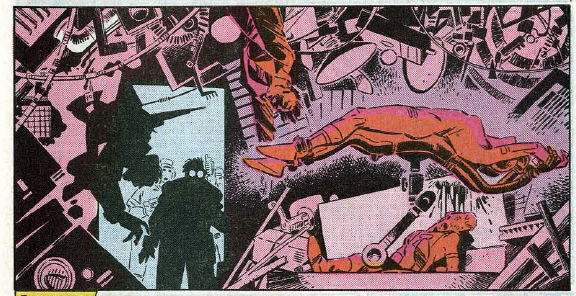 The Genegineer notes that Wolverine's blood sample shows a lower-than-usual red blood count, which would ordinarily kill someone, which is the first indication we've been given that Wolverine's healing factor is constantly working to heal him from the presence of the adamantium on his bones, an idea that will be explored more deeply in the future. 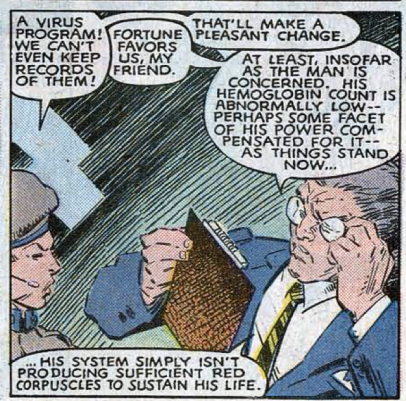 It's Leonardi's turn on pencils again, and while I appreciate his art more now than I did as a kid reading this story, if neither he nor Silvestri could do the entire arc, I think I would've prefer they split the story in half down the middle, rather than alternating issues.

A Work in Progress
This issue establishes that Genosha is located on the east side of Africa in the Indian Ocean, north of the Seychelles.

We learn the X-Men's invisibility to electronic detection extends even to their blood, as the Genoshans are unable to test Rogue and Wolverine's blood samples with their equipment. The computer virus eradicating every mention of the X-Men is also mentioned again. . 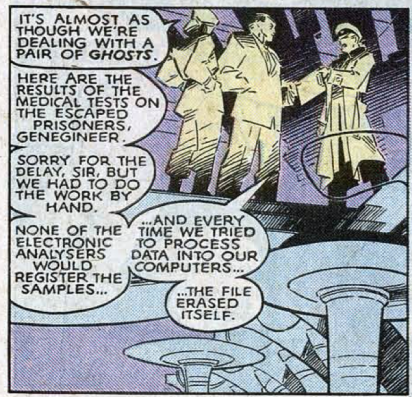 What is effectively a Genoshan propaganda piece suggests what the general public (and the rest of the world) believes about Genosha. 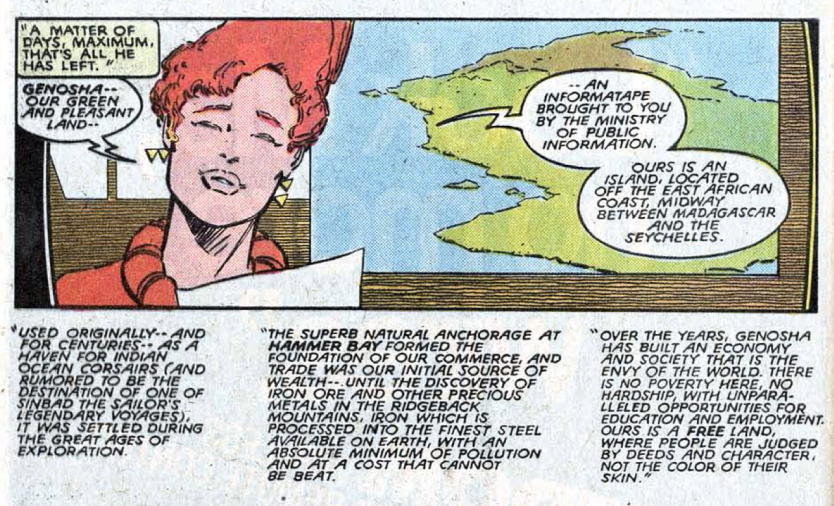 Carol-as-Rogue pulls that old trick of dressing provocatively so that everyone remembers her, but they won't remember her face. 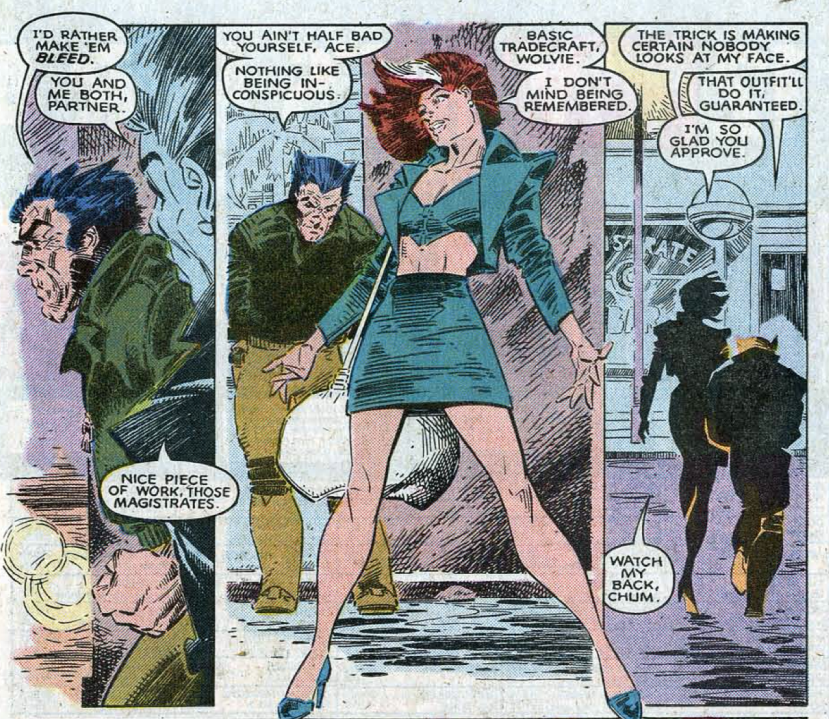 The Genegineer's first name is given as David, and Jenny Ransome refers to him as "Uncle David" when she meets with him, indicating just how close the Ransome and Moreau families are. 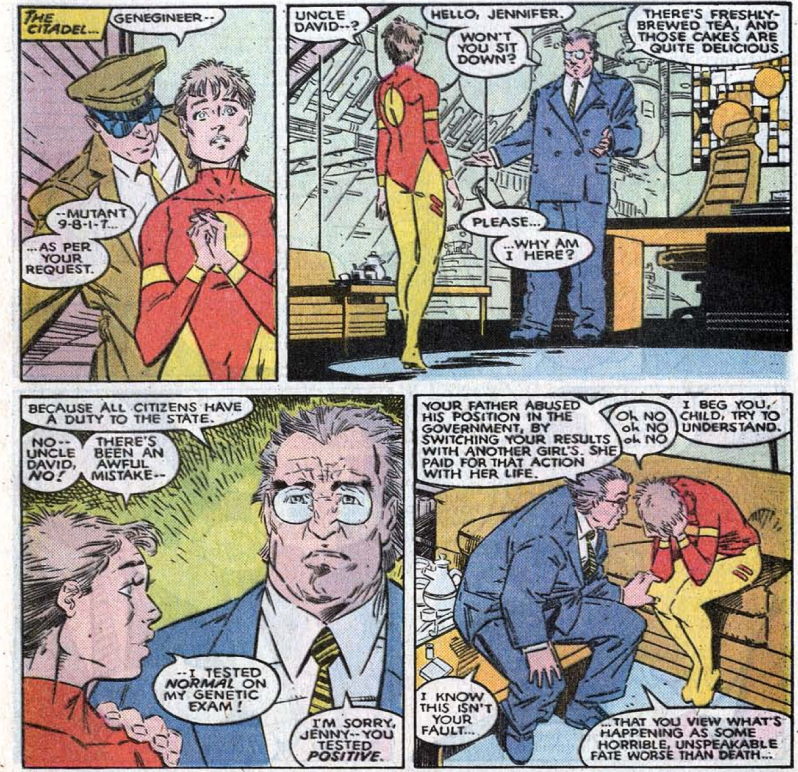 It's established that the Genoshan economy runs off a "few hundred" mutate slaves, which seems relatively consistent with the general ratio of humans-to-mutants respective to Genosha's population. 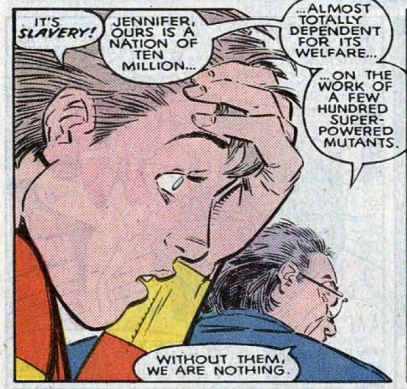 The colored clothing the mutates wear is revealed to be a "skin suit" that is permanently affixed to each mutant during the mutate transformation. It becomes like a skin to them, identifying them as a mutate and also processing their waste. 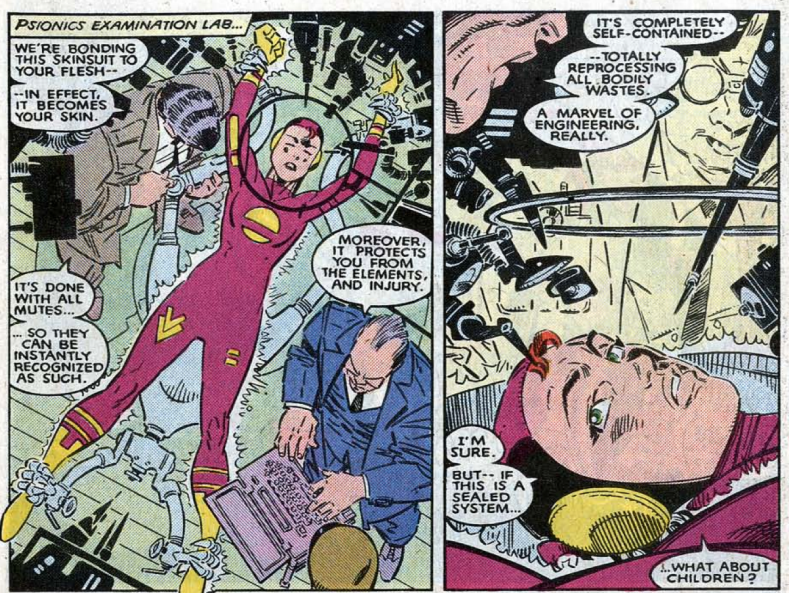 Claremontisms
Dazzler is Lightengale again. She also uses her dazzle technique again, the first time in a long time.

The Best There is at What He Does
We're reminded that Wolverine's healing factor usually closes the wounds caused by the extension of his claws. 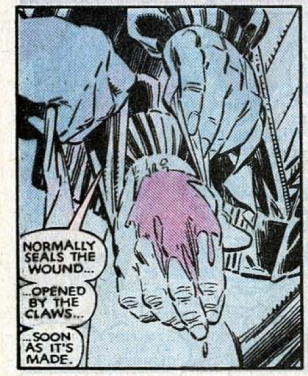 For Sale
This issue contains one of the first ads for the Columbia House record club we've seen, even featuring the opportunity to purchase some of those new-fangled compact discs the kids are all the rage about! 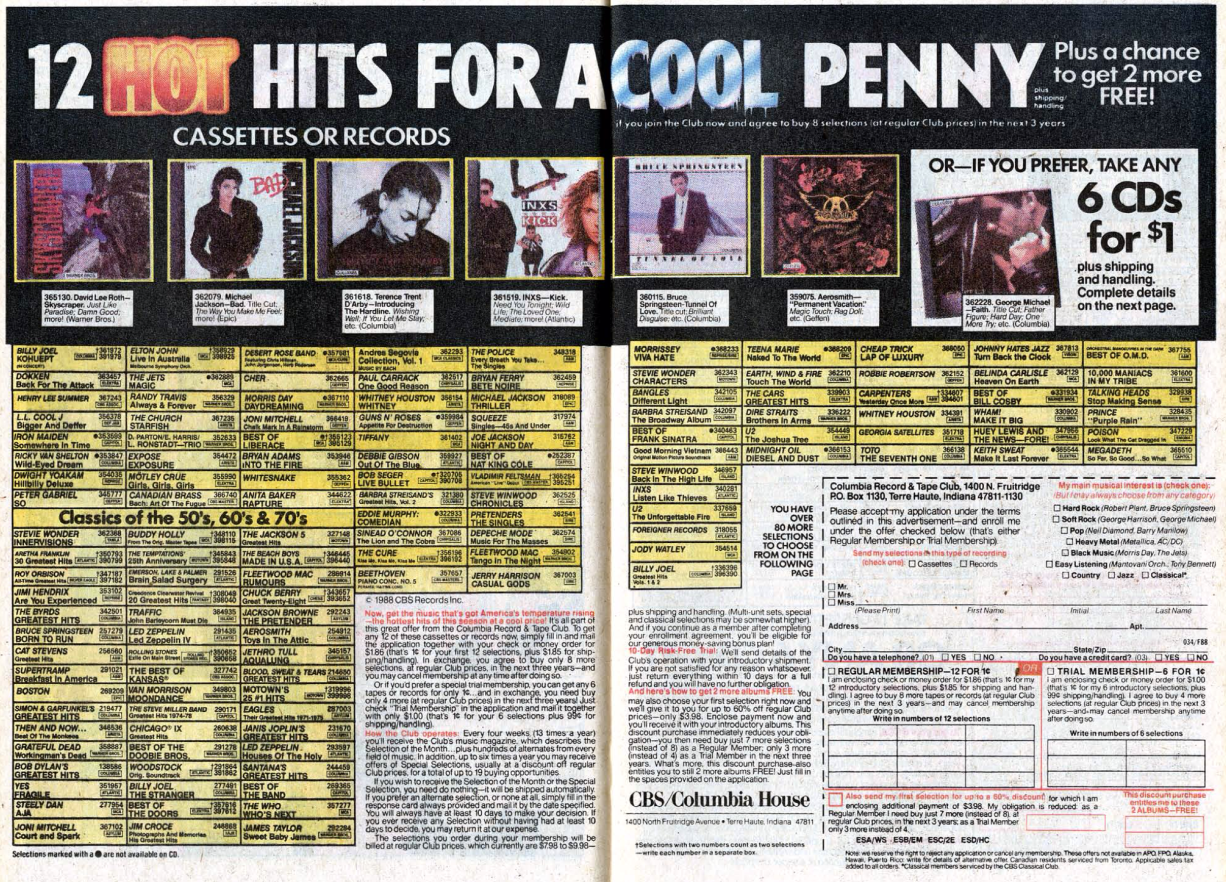 Teebore's Take
In terms of the plot, this issue moves the story along rather incrementally: the X-Men arrive on Genosha (considering they can teleport anywhere instantaneously, this is not a big deal) and fight some Magistrates, Madelyne blows up the Genegineer's lab, while Wolverine and Rogue fall in with Phillip Moreau (but aren't really any closer to getting off the island than they were at the end of last issue). But this issue really does a fantastic (and arguably more important) job of illustrating just how awful a place Genosha is for mutants.

Jenny's conversation with the Genegineer, as she refers to him as "Uncle David" while wearing one of the mutate skin suits, is heartbreaking, especially as the Genegineer transitions from kind and understanding to spouting political rhetoric about how tough a place Genosha is to live and the need to keep mutants down to protect the status quo. Then there's the Mutant Train, with the obvious allusions to the Holocaust. But most frightening are the scenes where Magistrates casually threaten or assault mutates, and the mutates simply apologize and promise to do better. We learn that the Genegineer not only modifies the mutates' bodies, but their minds as well. The Genoshans haven't just enslaved mutants physically, they've enslaved their thoughts as well, taken away their ability to even fathom a better life. It's a horrifying notion, and while this issue may not be the most important to the arc plot-wise, it's an important contribution to the powerful metaphor at the heart of the story.

Next Issue
More shenanigans in New Mutants #69, followed by the return of Death in X-Factor #34. Next week, the Genosha arc comes to a close in Uncanny X-Men #238.
Newer Post Older Post Home
Posted by Austin Gorton at 12:00 PM