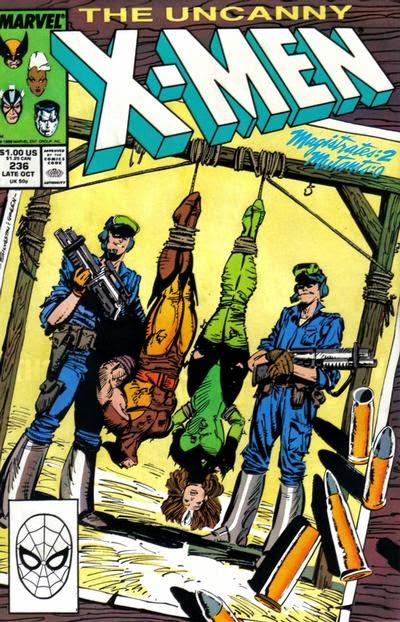 In a Nutshell
Wolverine and Rogue fight to escape the Genoshan citadel.

Plot
In Genosha, Wolverine and Rogue, having been transported there by Pipeline, battle a group of Magistrates before Wipeout arrives and removes their powers. Elsewhere on Genosha, Philip Moreau wakes up to a call sending his father, the Genegineer, into work. En route to the Citadel, the Genegineer is made aware of the situation by the Chief Magistrate. Back in Australia, the X-Men teleport into the cell of the captured Magistrates, and Psylocke reads their minds, learning the truth about Genosha: that their economy is built on the genetic manipulation and slave labor of mutants. The X-Men then depart to rescue their friends. Back on Genosha, Rogue, traumatized by the harsh treatment she received at the hands of the Magistrates once her powers were removed, hands over control of her body to the Carol Danvers persona, in the hopes that Carol can help her and Wolverine escape. 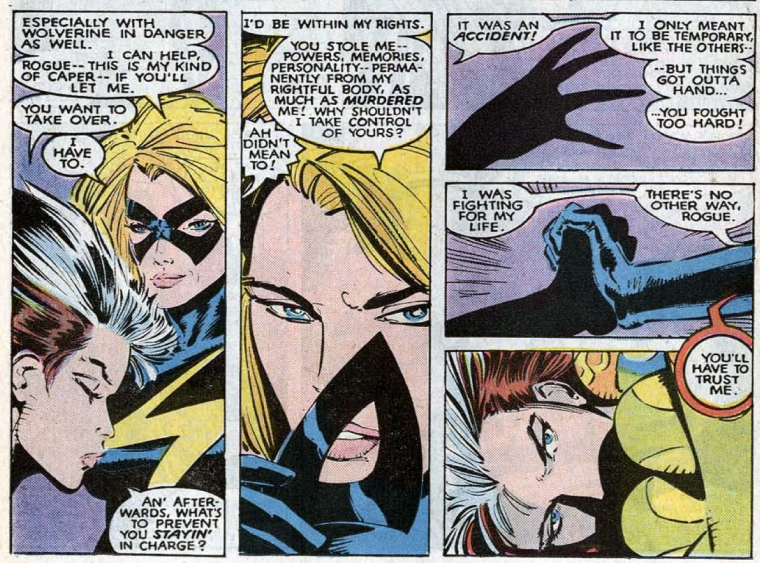 When a group of Magistrates enter Rogue's cell, Carol is indeed able to escape and then free a wounded, powerless Wolverine, dressing the pair as magistrates. Elsewhere, Philip learns that his girlfriend Jenny Ransome tested positive for being a mutant, and having been recaptured, is poised to undergo the mutate process at his father's hands. Back at the Citadel, Genoshan scientists are struggling to get a reading on Madelyne when the demon N'astirh appears on a monitor and triggers an explosion that knocks out the power. Taking advantage of the confusion, Wolverine and Rogue sneak into the hanger bay and steal a vehicle. As they leave the Citadel, Rogue, still under the control of Carol, vows that they'll get their powers back and make Genosha regret ever laying eyes on them.

Firsts and Other Notables
The full extent of Genoshan society is laid out this issue, as we learn its citizens are required by law to submit themselves for genetic testing. If they're a mutant, the individual is transformed into a mindless slave (or "mutate") and branded with a number, with the Genegineer responsible both for overseeing the mutate transformation process and for making any modifications to a mutant to alter their powers based on the current needs of the state. 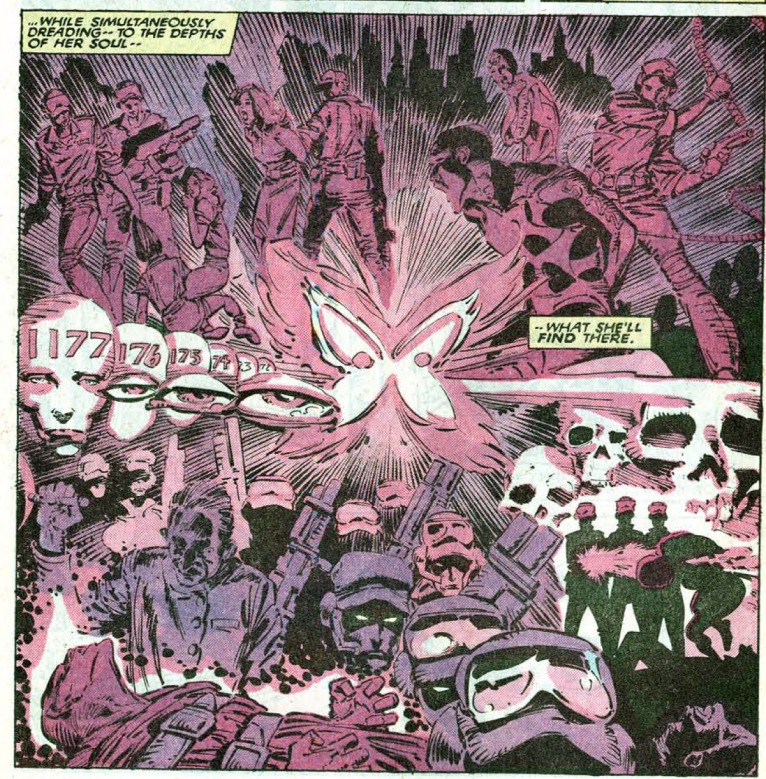 This issue marks the first appearance of Phillip Moreau and his father, the Genegineer. Both are fixtures of future Genoshan stories. 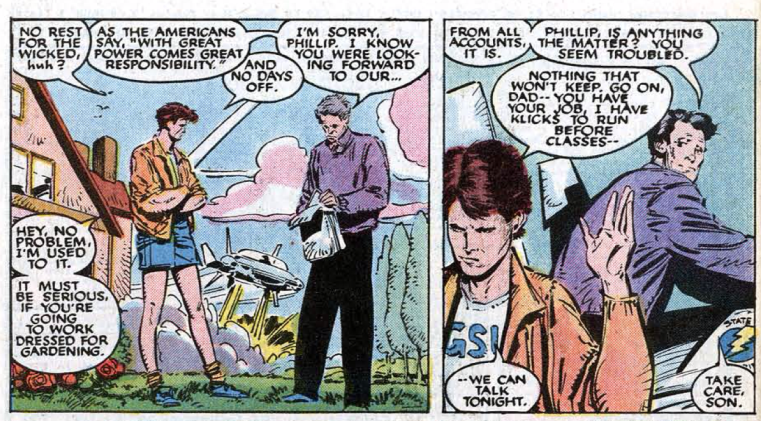 Though unnamed, Chief Magistrate Anderson, the head of the Genoshan magistrates, also appears for the first time. 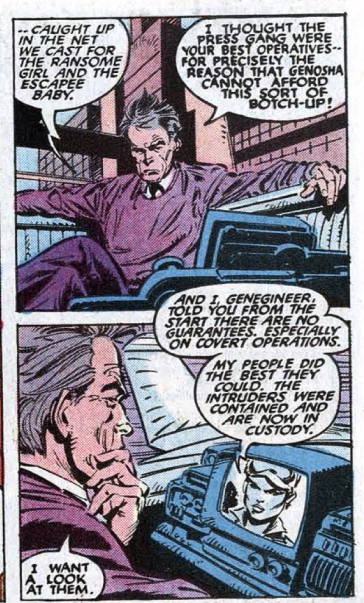 Wipeout, another "free" Genoshan mutant, makes his first appearance. As his name suggests, he is capable of wiping out superhuman abilities. 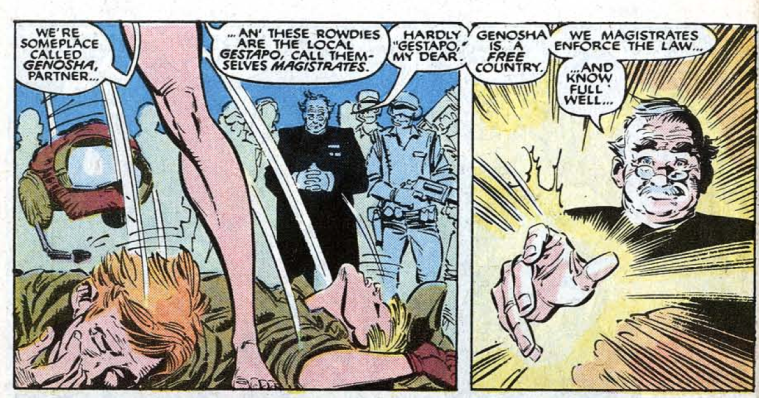 Rogue is essentially raped this issue, off panel, by a group of magistrates after Wipeout removes her power. Though it's established later in the issue that they "only" touched her against her will, the effect of wanting physical contact for so long only to have it come in such a violent, repulsive manner deeply affects Rogue, and she's forced to allow Carol Danvers' personality to take control of her body in order to affect an escape. 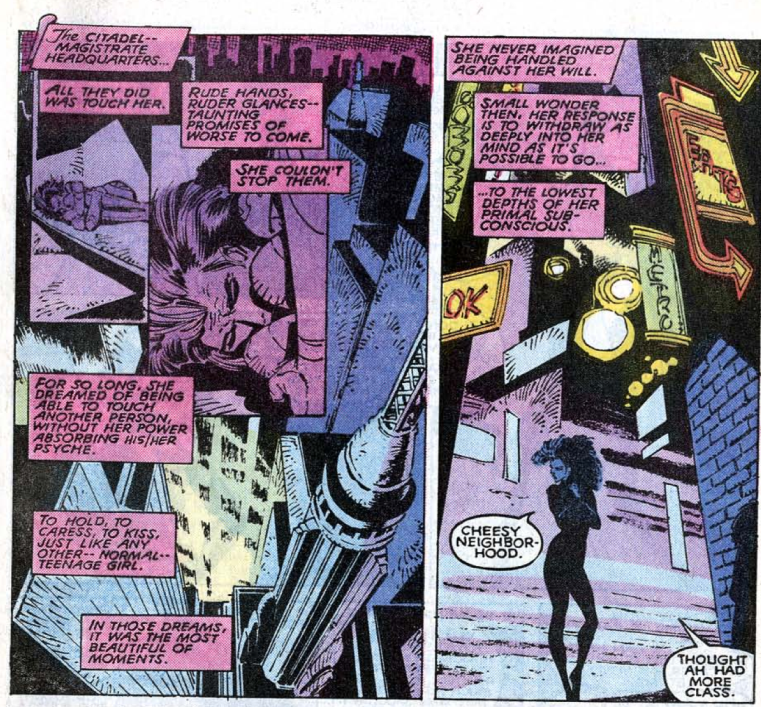 N'astirh makes his first appearance in X-Men, looking for Madelyne at S'ym's request in both Australia and Genosha. 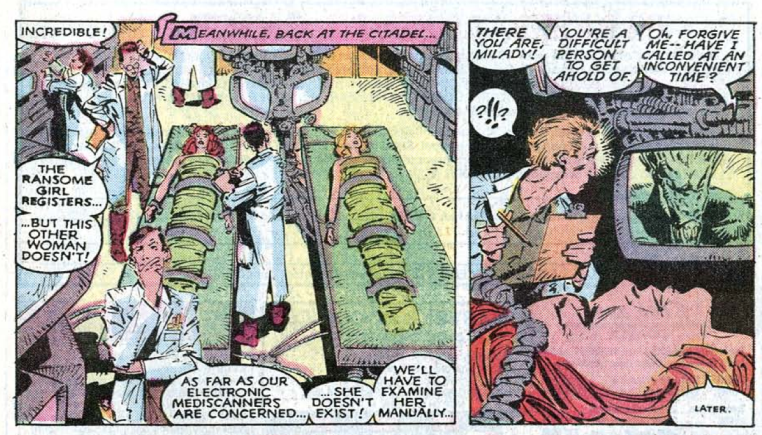 It's revealed that Jenny Ransome, with whom Madelyne was working last issue, is Phillip Moreau's girlfriend and a mutant, with latent healing abilities. Her father, a government minister, switched her test results to protect her, but when the other girl died during the mutate process, his crime was revealed and the Press Gang was sent to retrieve Jenny. The Genegineer is planning on changing her power so that she can manipulate metal and rock rather than flesh, as the government needs more mutants in the mines at the moment. 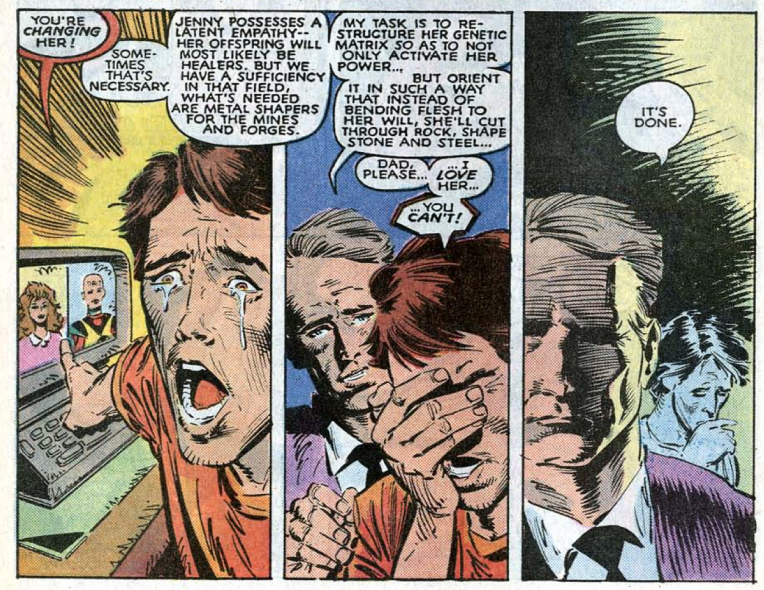 Great cover on this one.

A Work in Progress
In addition to the reveal that Genoshan society is built on mutant slave labor, we also learn that the headquarters of the Genoshan government is the Citadel, while the capital city is Hammer Bay. Genosha is also said to be a technologically advanced nation (they have flying cars, for example). 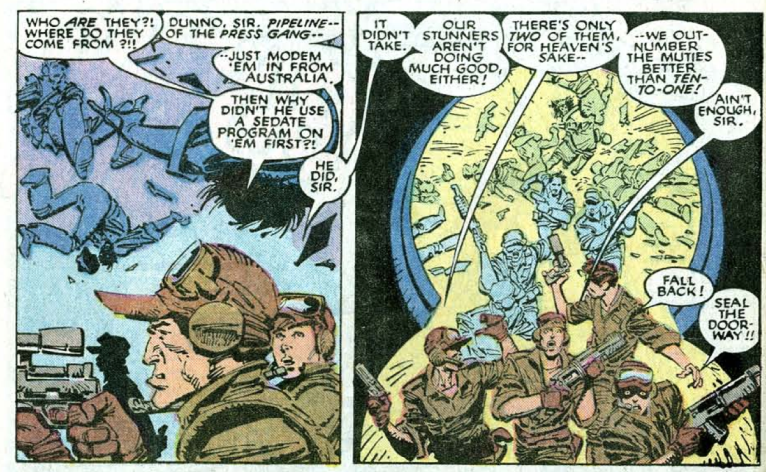 In addition to the more recent "the X-Men are invisible to detection" routine, the computer virus introduced to the US network in issue #158 comes up again, as the Genoshans find no reference to the X-Men in any of their files, and all efforts to log data on them get wiped out. 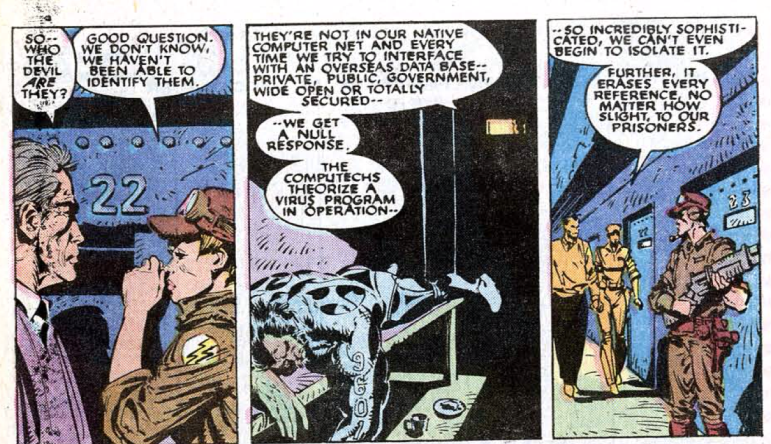 It's revealed that a small imprint of every person whose mind she's ever absorbed resides in Rogue's psyche. 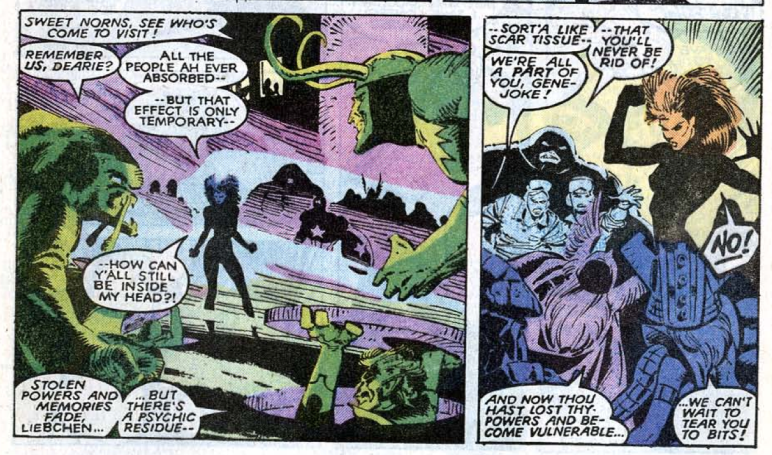 I Love the 80s
Rogue refers to the Magistrates weapons as a "Lucasfilm light show".

Later, Carol references Star Wars as she and Wolverine escape the Citadel. 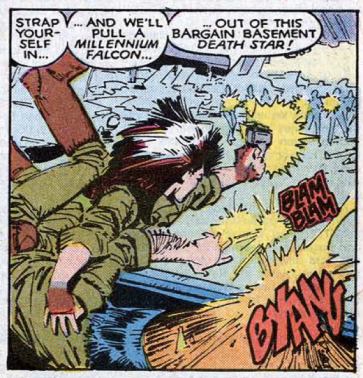 It's in the Mail
The letters column is a page and half this issue, with letters discussing the post "Fall of the Mutants" status quo along with a quite a few complaints regarding the artificiality of keeping the X-Men separate from everyone else for so long. The Ann Nocenti Colossus limited series is also announced as having been moved to Marvel Comics Presents, while the bi-weekly summer shipping schedule is said to be an annual event.

The bottom half of the second letters page is taken up by an ad for "Inferno", one of three in a series. 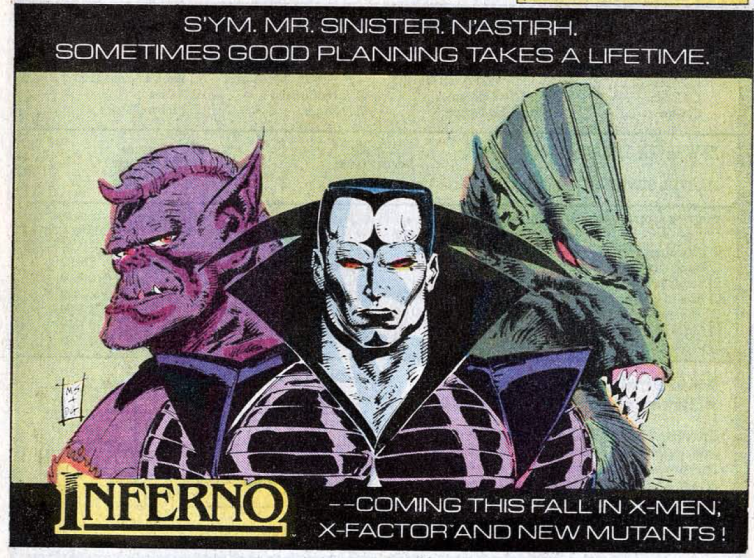 Teebore's Take
In Uncanny X-Men #200, in the midst of Magneto's trial, James Jaspers said he was unaware of any country where it was a crime to be a mutant. While it's debatable whether Jaspers (or, for that matter, Magneto and the X-Men) should have been aware of Genosha at that time (given the fact that this issue presents them as something of an economic powerhouse), with this issue, as we learn about its economic and social relationship with mutants, it's made clear that Genosha is just such a place, where it is a crime to be a mutant and Magneto's worst fears have come to pass, existing right alongside the X-Men.

Currently a metaphor for apartheid in South Africa (it will later be used as stand-in for Israel, Bosnia and any number of political and social hotspots), Genosha is arguably Claremont's greatest thematic contribution to the series since "Days of Future Past". Where that story established the price of failure should Professor Xavier's dream not become reality by showing us a dystopic future where mutants are systematically exterminated and the world is on the brink of extinction, with Genosha, those stakes are transported to the present day.  The mutants of Genosha are living in the kind of world "Days of Future Past" warned about.

With the introduction of Genosha, it's made clear that the X-Men are no longer fighting to prevent a world of mutant subjugation from coming to pass. It already exists, in the present, at the core of a thriving, technologically advanced society. Now they are fighting to contain that world, to prevent it from spreading elsewhere. The future is no longer just a grim specter haunting the X-Men; in Genosha, it has taken form, and threatens everything in which the X-Men believe.

Next Issue
Tomorrow, we look at the debut of Excalibur's new series in Excalibur #1. Next week, more Genoshan shenanigans in Uncanny X-Men #237.
Newer Post Older Post Home
Posted by Austin Gorton at 12:00 PM