In a Nutshell
Death battles Hodge for the life of Candy Southern.

Plot
Deep below a Chicago skyscraper, Death fights his way through Right soliders, in pursuit of Cameron Hodge. Hodge, watching Death's progress on a monitor, sends a group of demons provided by N'astirh to engage the winged mutant. In Hong Kong, Nanny and the Orphan Maker intercept a list of mutant infants sent to N'astirh from Hodge as they add another mutant child to their group, killing her parents in the process. Back in Chicago, N'astirh appears before Hodge, complaining that infants on his list have disappeared. Hodge directs him to the lower levels of an orphanage, then tells N'astirh of Angel's transformation into Death. As Death draws closer, N'astirh withdraws, taking his demons with him but promising to honor his deal to keep Hodge alive. 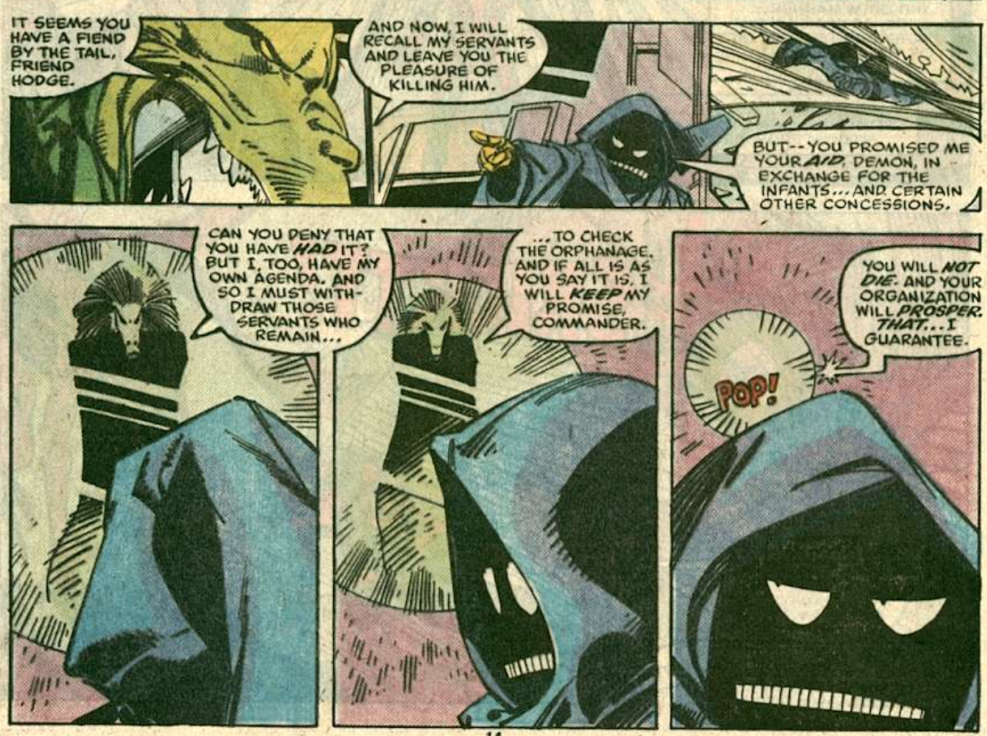 In New York, Marvel Girl returns from seeing the kids to their new school just as Cyclops prepares to depart in search of his son. She insists on joining him. In Chicago, Death reaches Hodge, and as they fight, Hodge tells Death that Candy Southern is essentially dead already, the victim of Right experiments, as the only thing keeping her physically alive are the machines to which she's connected. When one of Death's metal feathers enters the rocket launcher of Hodge's armor, it triggers an explosion that blows off Hodge's protective helmet. As Hodge disconnects Candy from life support, Death flies in, grappling hand-to-hand with Hodge until his wings slice off Hodge's head. Reaching Candy, Death discovers that Hodge was right: she is dead. Cradling her body, he turns, enraged, to face a group of Right soldiers. He tells them he is the Dark Angel, and his name is Death.

Firsts and Other Notables
Cameron Hodge seemingly dies this issue when Death's wings cut off his head, though true to the deal he struck with N'astirh, we'll learn Hodge didn't die; he'll turn up next as a head attached to a monstrous robot body (the other part of N'stirh's promise - that Hodge's organization will prosper - doesn't hold quite as true. While the Right will remain a presence in the books for awhile and see a return in Kyle & Yost's X-Force, they will eventually be supplanted in the narrative by newer anti-mutant groups). While battling Hodge, a still-slightly-sympathetic Warren warns him that he can't always control his wings, the first time since his transformation that the notion his new wings occasionally act of their own dark accord has appeared. This will become a long-standing (and increasingly annoying) source of deep, deep angst for the character (on par with Cyclops and his deadly blasts) in the decades ahead. 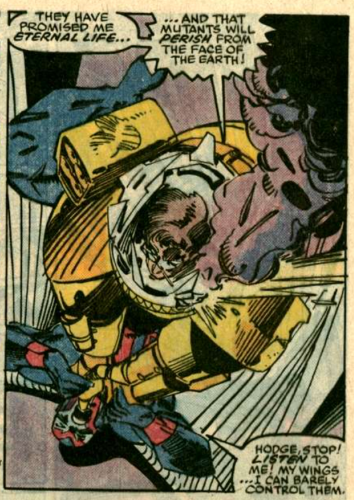 Candy Southern, who's been around since the Silver Age, does die this issue, after Hodge disconnects her from life support after having essentially killed her earlier via experimentation. She will return briefly in a future issue of Uncanny X-Men, alongside Hodge as a "work-in-progress" member of the Phalanx, before dying again, and I don't believe she's come back since. 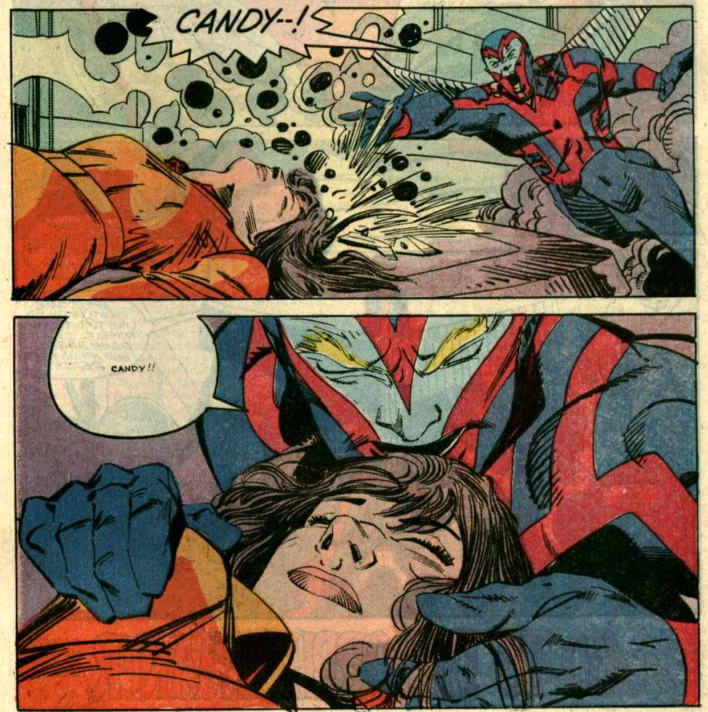 Lots of "Inferno" setup in this one, as N'astirh has his demons searching for mutant infants using a list provided by Hodge (as promised in issue #32). That search, and the need for the mutant babies, will factor heavily into both the X-Terminators limited series and the "Inferno" issues of New Mutants. Hodge also directs N'astirh to a group of mutant babies kept in a hidden floor of an orphanage; this location will directly feature in next issue, while also playing a role in Madelyne's origin when its revealed. 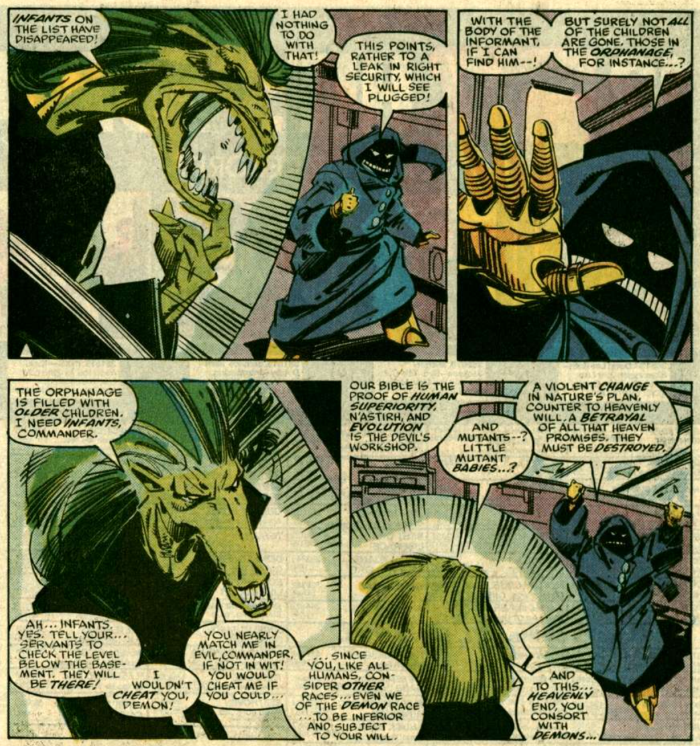 Nanny has intercepted the list of mutant infants Hodge gave to N'astirh, and is attempting to save as many of them as possible (while killing their parents, of course). Hodge attributes the leaking of the list to a breach in Right security, an indication that Nanny was once affiliated with the Right. 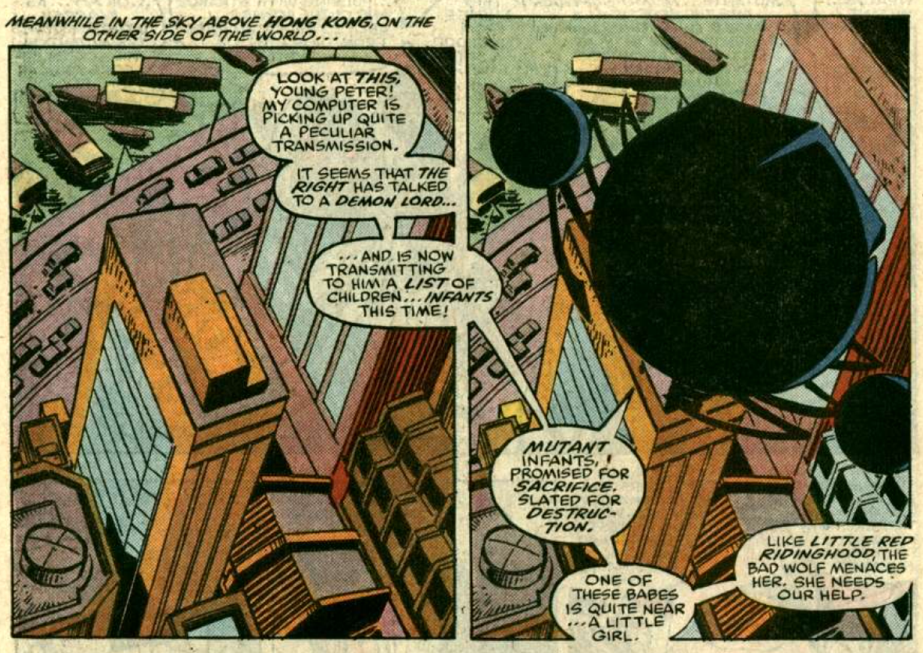 On a personal note, I received this issue as a birthday gift from a friend (it had to have been my twelfth or thirteenth birthday), and I still remember that I was very excited at the time, because I had been thoroughly trained by Wizard to inflate the value of any issue that earned a special notation in their price guide (in this case, "D: Candy Southern").

The Chronology Corner
Jean is seen returning from dropping Artie and Leech off at school, while Iceman is said to be doing the same for the older kids, as seen in X-Terminators #1 (which we'll cover in a few weeks, closer to "Inferno", into which its final issues directly lead). Beast is also noted to be off with the Avengers, as seen in Avengers Annual #17. 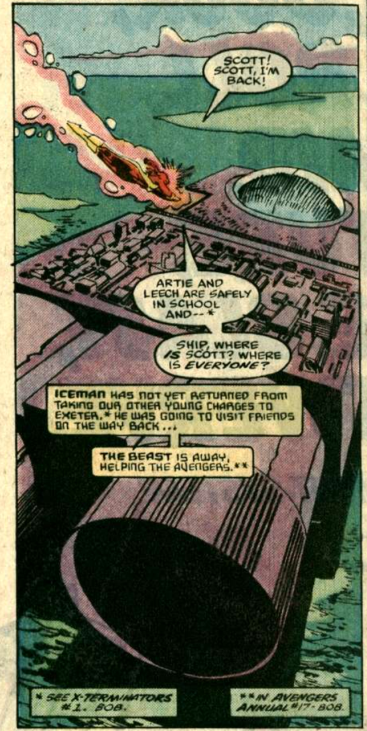 A Work in Progress
Orphan Maker's real name is revealed to be Peter.
Working with Ship off panel, Cyclops has deduced a likely place to look for his missing son: the orphanage where he grew up (I believe this is also the first time it's established that said orphanage was in Nebraska).

Hodge's ranting in this issue further details his motivation for hating Warren and attacking mutants, all of which essentially boils down to "jealously". 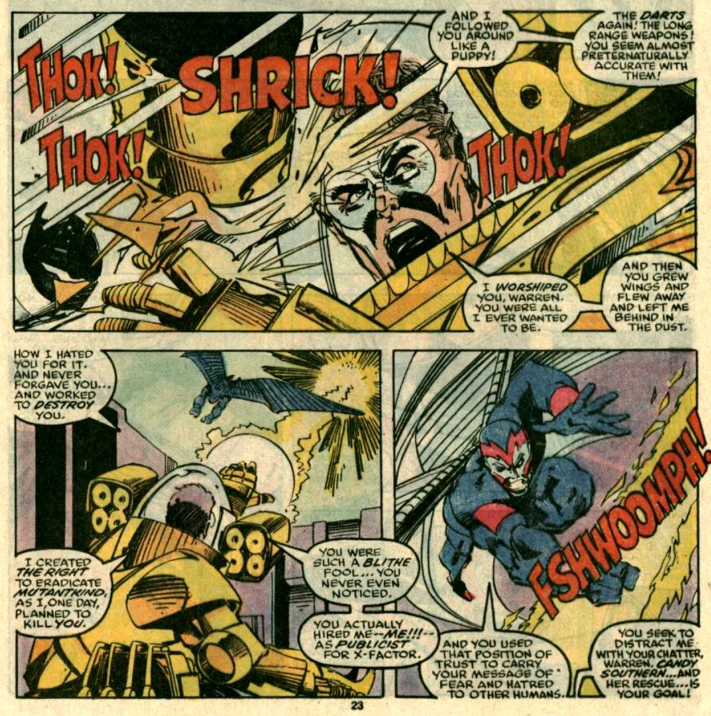 Hodge confirms that the Right captured Candy just as she was about to expose the organization to Trish Tilby, which would have been sometime during X-Factor's late teen issue. 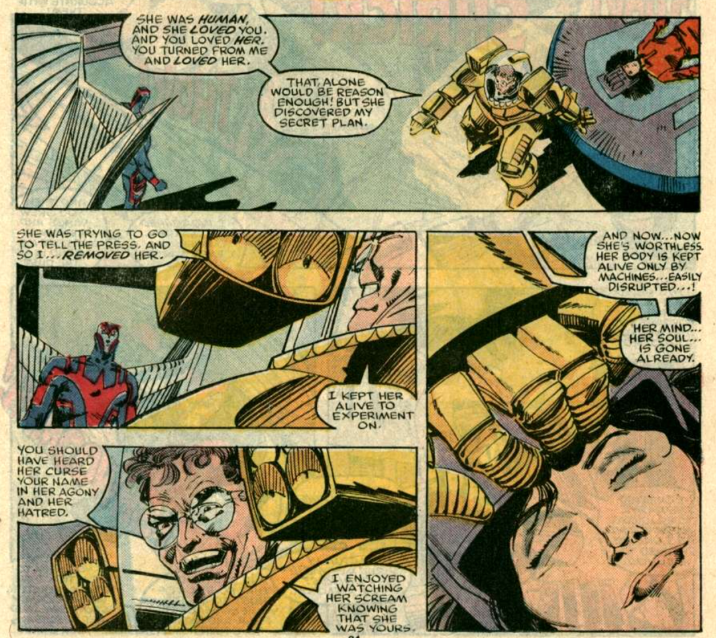 Young Love
Jean accompanies Scott to the orphanage to search for his son, telling him that, unlike when he lived there, he's no longer alone. 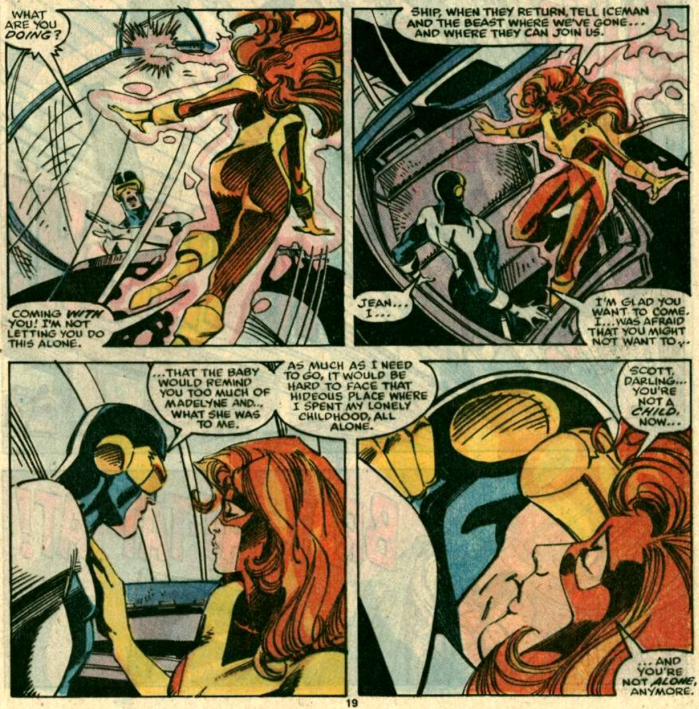 Teebore's Take
This is mostly just one long, protracted fight between Death and Cameron Hodge. There's a few interlude pages for Nanny and the Orphan Maker as well as Scott and Jean (to setup next issue), and Hodge's interactions with N'astirh continues the build towards "Inferno", but for the most part, this is Death, after being relegated to a few subplot pages here and there since his big debut in "Fall of the Mutants", taking over the title for an issue to wrap up some unfinished business with Hodge. Thankfully, Walt Simonson is on hand to inject a fair amount of energy into the proceedings, keeping scenes of Warren and Hodge yelling at each other across video monitors from becoming too dull. Weezie, meanwhile, fills the issue with histrionic dialogue, as is her wont ("They have a cutting edge. They're living death. Their scream gives voices to the darkness in my soul").

But the central conflict of this issue has thematic meaning for the series as well. With Beast back to normal as of last issue, four of the five original X-Factor members have now positioned themselves firmly in the book's post-mutant hunter status quo. This issue does the same for Angel, putting him on the path towards rejoining the team as he battles the man who not only led him towards his transformation into Death and killed his longtime girlfriend, but was the villain who has been retroactively credited with orchestrating all the narrative problems in the series' early issues. With Hodge dead (for now), only one dangling thread from the book's early years remains, one which the Simonsons will start working towards tying up next issue: Madelyne Pryor and Scott's missing son.

Next Issue
Next week, we look at Uncanny X-Men #238, Excalibur #2, and Wolverine #1, the beginning of the ol' Canucklehead's solo series.
Newer Post Older Post Home
Posted by Austin Gorton at 12:00 PM