Game of Thrones 4x08: The Mountain and the Viper 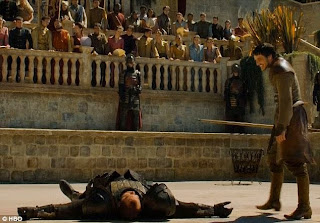 Mole's Town
A the female inn keeper is playing Name That Tune via burps. One patron first guests “The Rains of Castamere” but is wrong. The next guy correctly guesses “The Bear and the Maiden Fair” which, duh, those are the only two songs in Westeros.

Anyway, Gilly is at this inn and I think we are all shocked to hear she's not having the time of her life. She hears an “owl” hooting and gets freaked. The innkeeper doesn't know what the big deal is but soon we see Ygritte and her wildings showing up and slaughtering people. Ygritte finds Gilly and her child hiding but her heart grows three times larger and she decides to spare them.

After the Night's Watch tries to comfort Sam and convince him Gilly could still be alive they talk of more important things. Mole's Town is the final stop until The Wall. The Wildlings are going to attack from the front which means Mance's army will descend upon them from the back. Everyone pretty much agrees they're boned.

Meereen
Grey Worm is bathing in a lake when he catches a glimpse of a naked Missandei. He likes what he sees. But he doesn't like the fact that Missandei sees what he's seeing and knows that he's liking it. Afterwards, Missandei tells Daenerys about it but Daenerys simply wonders how much of Grey Worm's penis was cut off.

Grey Worm visits Missandei apologizing for sneaking a peak. Grey Worm tells Missandei that he's glad he had his dick chopped off because that set him on the path to meeting her. Honestly, I can't think of a greater compliment. This pickup line works and Missandei admits that she liked the fact that Grey Worm was checking her out.

Elsewhere, Ser Barristan receives information about Robert Baratheon had pardoning Jorah. He confronts Jorah about this and confirms that Jorah first came aboard the Daenerys train as a spy.

Jorah meets Daenerys in front of Barristan and Missandei. He'd like to speak to her alone but Daenerys thinks meeting a traitorous spy alone might not be prudent. Jorah says he used ti be a spy but is now on Daenerys' side. Oh, he loves her too. Daenerys is like, “Woah, we're clearly in the friend zone.” And it's a good thing she even likes him that much because it means instead of execution he just gets exiled. Good thing he got that pardon or else he'd have nowhere to go!

Moat Cailin
Ramsay Snow shows up on the outskirts of Moat Cailin with Reek. Reek must now pretend to be Theon Greyjoy and deliver a letter to the ironborn soldiers. Reek enters Moat Cailin and meets with the soldiers' leader. The leader is suspicious that Theon isn't who he says he is due to Reek's talk of honorable surrender.

The leader starts grilling Reek and it looks like Theon/Reek is about it crack when one of the other soldiers decides putting a dagger through top of the leader's head was the right move to make. That soldier thinks surrendering and living sounds better than fighting and dying. So he and the rest of the soldiers surrender...and die. Ramsay Snow is nothing if not dishonest.

Roose Bolton shows up later and seems pretty giddy about controlling the entire North because it's so large in area. Greenland is too but you don't see anybody fighting over that, do you? Anyway, Roose is so appreciative that he makes Ramsay Snow an official Bolton. Now it is Ramsay who is giddy and he wants to celebrate by having Reek bathe him...and probably serenade him with a rendition of "How Am I Supposed to Live Without You."

The Vale of Arryn
Petyr Baelish is being questioned about the murder of Lysa Arryn. Littlefinger swears it was suicide but the council's isn't convinced. They bring in Sansa who says she can't lie. So she tells the council the truth about everything including her true identity. Well, she did lie and say the kiss Petyr gave her was a “peck on the cheek.” Oh yeah, and she also lies and says Lysa killed herself. So, the council is convinced and Baelish gets away with murder...literally.

Later, Petyr visits Sansa asking why she vouched for him. Sansa basically says she has no idea what the council would do with her but she does know Baelish wants in her panties so she's at least safe with him around. I think her pragmatic manipulation of events just made her even more arousing to Baelish, if that's possible. But her manipulation just made me sad for the loss of her innocence.

Petyr then talks with the council people about having Robin spread his wings (pun intended). He thinks Robin should learn to fight, ride and visit other places in the Vale. I would say Baelish is plotting something but that would be like saying Cookie Monster is craving cookies.

Anyway, Petyr tells Robin his plan and soon Sansa comes in looking all done up and giving Petyr a seductive smile. I'm not sure if she's just using Baelish for safety or if she is actually into him. I'm hoping for the former but I fear it's the latter.

Almost Directly Outside The Vale of Arryn
Westeros' favorite couple is talking about their favorite topic: killing. Arya says she's not as happy as she thought she would be when she heard Joffrey was dead. Arya wanted to kill him herself. Who didn't?

The Hound thinks poison is a woman's weapon. Arya thinks that makes The Hound weak. Killing is killing. Who cares about the method?

This very upbeat discussion comes to an end when they reach the Bloody Gate. The sentries want to know who goes there and The Hound tells them he's come to give Arya to her aunt. The guard informs them that Lysa died three days ago. Arya finds this pretty friggin' hilarious.

So, Jaime and Tyrion walk to the arena. Tyrion is unimpressed by Oberyn's lack of armor and drinking of wine. Oberyn wants to know what combat experience Tyrion is drawing upon to give this advice.

After Oberyn Viking-ed the victory away Tywin declares the trial by combat over, sentences Tyrion to death and Tyrion gives the same look I gave at the end of the 2009-2010 NFC Championship Game.

Other Thoughts
I thought it was kind of nice that others in the Night's Watch were trying to comfort Sam.

I'm no doctor, but if you take a boy's grapefruits before they reach puberty do they experience sexual attraction? Also, I would think the masters would want the Unsullied to keep their stones since that would increase testosterone (and, thus, strength). Needless to say, I'm overthinking this but I'm also very curious if the pillar and/or the stones were taken.

I think it was pretty obvious that Ramsay Snow was concerned that having Reek act like Theon would bring out Theon.

I found it laughable that Jorah pointed out that Robert Baratheon's pardon showing up was just Tywin trying to devide Daenerys' army. That's like when a cheater blames their significant other for searching their cell phone history.

As Jorah was leaving Meereen I was waiting for a dragon to swoop down and bite his head off.

I was happy to get some sort of reaction from Arya regarding Joffrey's death this episode.

It did seem to me a bit unfair that Oberyn was able to get a new weapon during the battle after his first spear  broke.

So, is The Mountain going to live? His wounds seemed quite serious. If The Mountain dies as a result of the battle too does that change the verdict at all? Is it like a hung jury?

I would think this outcome of the trial by combat will strain the alliance the Lannisters were trying to build with the Martells.

After last episode I was very confident Oberyn would take down The Mountain. But as the weeks went on I remembered what show I was watching. I became even less confident of Oberyn's victory when I realized that Tyrion still had the possibility of living even if Oberyn didn't (by some sort of means of escape). When Oberyn was acting over-the-top cocky I really knew I was in trouble. So I won't say I was surprised by the outcome but it did bum me out.

I would say Oberyn's death has been the Game of Thrones death that has frustrated me the most. Ned Stark's demise was spoiled for me. The Red Wedding was annoying but that was more because I hated the Lannisters rather than me having any giant amount of love for Robb and Catelyn Stark. But, despite him being a relatively new character, I genuinely liked Oberyn. And not only did I like Oberyn but I felt that there was more to his story that we will now not get. Also, I thought Game of Throne would have taken a more interesting path if Oberyn had won. Him losing just makes me feel like the plot is spinning its wheels.

Obviously we're not even halfway done with this show so by the time Game of Thrones has finished I reserve the right to change my mind. However, at this point in time, if somebody asked me if they should start watching Game of Thrones I'd be hard pressed to recommend that they do. The whole process of watching this show feels so masochistic. I feel like the only reason someone would recommend this show is the thought that, in the end, things will work out and we'll get a (relatively) happy ending. Maybe that's true, however, there is zero evidence that suggests that will be the case.

None of that is to suggest I'm going to stop watching Game of Thrones. I...well...I have a very complicated relationship with this show.

Reek/Theon: Do this and he will be just and fair with you as he has been with me.

The Hound: Family, honor and all that bullshit. It's all you lords and ladies ever talk about.
Arya: I'm not a lady.

Tyrion: Trial by combat. Deciding a man's guilt or innocence in the eyes of the gods by having two other men hack each other to pieces. Shows you something about the gods.