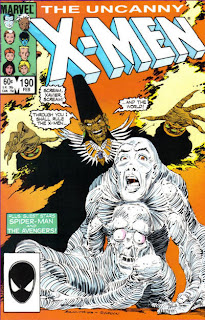 In a Nutshell
The X-Men find themselves in a world transformed by the evil wizard Kulan Gath.

Plot
Kulan Gath has transformed New York City into a medieval world of magic under his control. In Washington, DC, Val Cooper briefs the NSA on the situation, revealing that anyone or anything who crosses the mystical barrier around the city is transformed into their historical equivalent. As a result, any hope to prevent the spread of Gath's spell and save the world may reside with the handful of transformed superheroes that have been spotted inside the city. In New York, Storm awakens a prisoner of Kulan Gath's Morlock guards. Attempting to escape, she fights with Callisto, the captain of the guard. The pair end up in the river, where the current takes them through the magical threshold, returning them to normal. Meanwhile, Kulan Gath taunts the imprisoned and mutilated Dr. Strange as he magically fuses Professor X and Caliban into one being, who summons the New Mutants. 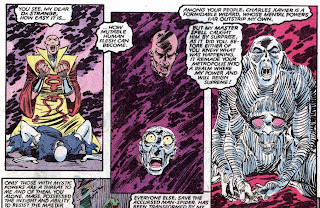 Gath ensorcells the young mutants, save Warlock, who is unaffected by the spell and flees. Uptown, a group of Morlocks harass Amara and Rachel, but they are saved by an untransformed Selene, who uses Rachel to telepathically contact Storm and Callisto. She asks for their help in defeating Gath, and casts a spell that will allow them to retain their identities inside the city. Storm and Callisto sneak back into the city through the Morlock tunnels. Elsewhere, an untransformed Spider-Man is hunted by the New Mutants. Seeking refuge in a tavern, he's aided by the transformed Avengers and X-Men, but the group is soon overwhelmed by Gath's troops. Spider-Man is captured and taken to Gath, but Selene, along with Rachel and Amara, appears and destroys the rest of Gath's forces. However, Selene is then seemingly captured by Gath himself. Storm and Callisto arrive and lead the assembled heroes into the Morlock tunnels. Discussing Gath's intention to increase his spell so that it encompasses the entire world, they agree to fight back and try to stop him, despite the huge odds against them.

Firsts and Other Notables
The villain of the story is Kulan Gath, an evil sorcerer and enemy of Conan the Barbarian who was last seen crossing paths with Spider-Man and Red Sonja in Marvel Team-Up #79, part of Claremont and John Byrne's run on that title. That story crossed over Conan's universe (known as the Hyborian Age) with the central Marvel Universe. The story ended with Gath imprisoned inside the necklace from which he was inadvertently released last issue. 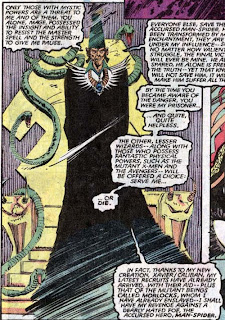 Between last issue and this one, Gath has cast an massive spell that has transformed Manhattan into a world much like that of Conan's. Val Cooper's briefing in the opening pages lays out the rules of Kulan Gath's spell: anyone or anything within the vicinity of it, or entering into its vicinity, is transformed into its sword-and-sorcery counterpart. People maintain their memories and their relationships, though both are rendered in the context of the modified world.

Spider-Man, the Avengers and Dr. Strange all guest star in this issue. 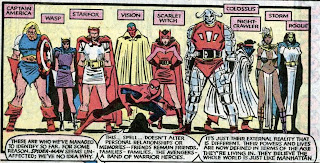 The Morlocks appear as Kulan Gath's personal guard (with Caliban horrifically merged to Xavier), marking their first appearance in the title since issue #179.

Of the various characters in the story, Dr. Strange is left untransformed because he was able to briefly counter Gath's spell, but he was then captured. Warlock is unaffected due to his alien nature. Selene is untransformed thanks to her own sorceress abilities, which she claims predate even Gath. And Gath leaves Spider-Man untransformed and thus aware of how the world has been altered, as punishment for Spider-Man foiling his plan in their last encounter.

The corner box on the cover gets briefly monkeyed with again, as New Mutants Cannonball, Mirage, Magma and Wolfsbane are added.

A Work in Progress
Gath's spell took effect fairly quickly after the events of last issue, with Professor X and the X-Men still in the city, as well as Rachel and Amara, and catching Storm before her ship left for Africa.

Even before she crosses the barrier and reverts to normal, Storm senses something wrong about her barbarian condition.

As Kulan Gath takes control of the New Mutants, an unaffected Warlock realizes his best course of action is to flee, something he realizes he's been doing a lot of lately. 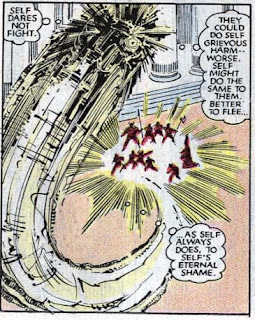 An untransformed Selene appears wearing the Black Queen garb, something which doesn't go unnoticed by Storm. 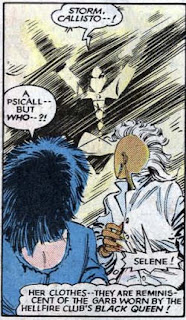 The gradual softening of Callisto begins here, as despite her hatred of Storm for usurping her position as leader of the Morlocks, she is angry about the attack which led to Storm's loss of power, telling her the Morlock's take care of their own. 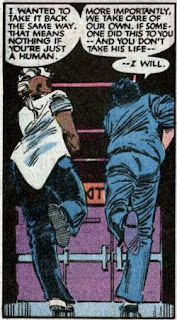 I Love the 80s
As in last issue, the Statute of Liberty remains under construction/renovation. 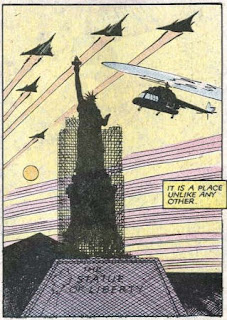 An ad for a VHS tape collecting the first five part GI Joe miniseries that kicked off their cartoon series features as one of its selling points the low, low price of only $39.95 for the tape. Holy crap you guys, remember when videos were that expensive? Nowadays I could buy the entire first season of the show on DVD for significantly less than that. 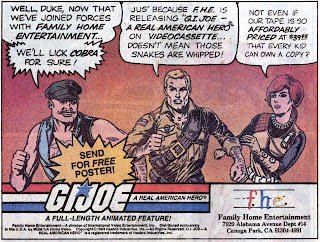 Claremontisms
Discussing whether the X-Men can help stop Kulan Gath, Val Cooper does the classic Claremont self-interjection, saying "I hope -- I pray -- so, with all my heart".

Illyana uses her Soulsword, which is, that's right, the "ultimate expression" of her power as a sorcerer. 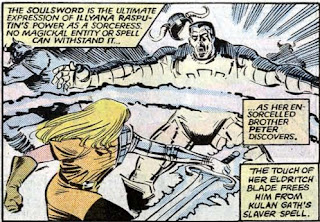 Artistic Achievements
Romita Jr. doesn't exactly get (or deserve) a lot of credit for the various costumes he designs for various X-Men characters during his run, but in an issue that requires all new looks for everyone, he does turn out some fun designs for the transformed characters and, really, the entire world (the opening double page splash is in and of itself is pretty amazing, with some great inks from Dan Gree). 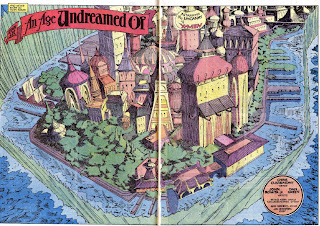 There's also a neat bit throughout the issue involving Spider-Man's dialogue. It's made clear that all the transformed characters don't speak or understand English, so all of Spider-Man's dialogue is framed in the "< >" symbols used to visually denote that a character is speaking in a foreign language.

Human/Mutant RelationsAt Val Cooper's briefing, one member of the NSA objects to Val including the X-Men amongst the list of heroes caught in Gath's spell. 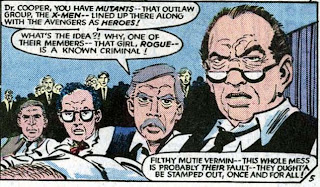 A general, however, recalling the Holocaust, admonishes the anti-mutant rhetoric. 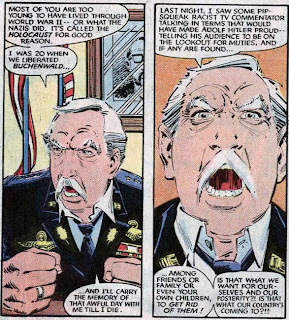 For Sale
Who wants some Trans-bots?!? 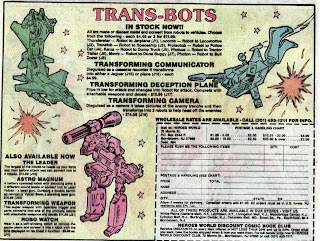 There's an ad for the Marvel role playing game (the first, I believe) as well as the board game classic, Risk. 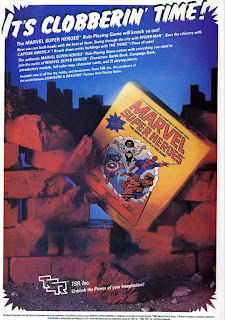 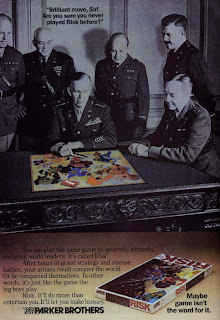 Teebore's Take
The story that unfolds in this issue and the next has long been one of my favorites. Not because it's groundbreaking, or innovative, or incredibly well crafted. It's simply good old-fashioned comic book fun, the kind of story you can really only find in serialized superhero comics. It marries the anything goes, big ideas aesthetic of the Silver Age ("Sword and Sorcery X-Men!") with the more grounded approach and consistent characterization of the Bronze Age. Heck, it even features dialogue on the cover, something that wasn't quite entirely passe yet in 1985, but getting pretty close to being so.

Also, much like the Casket of Ancient Winters stuff in earlier issues, I also really appreciate that Claremont realizes the scope of his story would logically include other New York based superheroes, so he includes them, the Avengers, Spider-Man, and Doctor Strange alongside the X-Men, New Mutants and Morlocks (apparently the Fantastic Four were out of town; maybe poor forgotten Daredevil was as well). The end result is a fun, dense, character packed story with some genuinely creepy imagery that manages to imagine a whole new world and tell a complete story in just a pair of issues. These days, a story like this would be a six issue miniseries followed by months-long ramifications unfolding in multiple titles (think House of M); here, it is just business as usual, an example of the Bronze Age at its most fun.

Next Issue
Tomorrow, we wrap up the Cloak and Dagger story in New Mutants #25, and next week, Uncanny X-Men #191 concludes the Kulan Gath story.
Newer Post Older Post Home
Posted by Austin Gorton at 11:06 AM